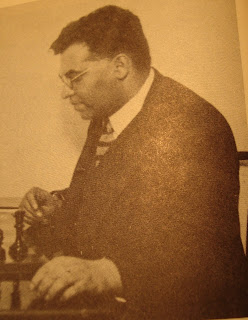 I apologize for the lead-in photo as my scanner is not working in my new setup and I had to resort to creative measures to get this rare photo taken of Mr. Reti at the event. The limitations of the web leaves mainly the photo from Wiki. I felt this post deserved a little more than that.

Born May 29, 1889 in Slovakia ( part of Austria- Hungary at the time), he came on the chess scene in the 1910’s playing in the Romantic Style with Gambits. His style changed rapidly following the First World War as he became one of the Hypermodern revolutionists.

In his book written in 1923, Modern Ideas, he essays the evolution of the great players I’ve been covering plus some before coming to the chapter on Hypermodernism. He talks about the evolution of combinative play from the days of Morphy and Anderssen utilizing rapid development and open positions to deliver the flare. He points out how the teachings of Steinitz and Tarrasch made remedy of the tactical melee with positional maneuvering for closed positions with the goal of small yet tangible goals that could translate to a win in the end.

In his book, he mentions how at the turn of the century, chess sort of fell into a stagnation with drawn matches being all too common at the top level who followed the prescribe principles. In the section on “Storm and Stress” He speaks of young masters at the time who found gambit lines in established openings played in vogue at the time. ( Still talking Pre-WWI with lot’s of Ruy Lopez and Queen’s Gambits )

One person he mentions is Akiba Rubinstein who rose with the Storm and Stress players ( Alekhine and Nimzovitch) but still played in the “scientific method” of his recent predecessors ( Tarrasch and Steinitz). Yet his formula for dealing with closed positions was best described as follows:

I am taking extra time in the explanation of Reti’s style as he was the first in my study at this event who really was an example of the Hypermodern movement playing his signature opening every chance he got. Reti proudly proclaims that “ Hypermoderns are the greatest opponents of routine play”. Born out of the positional nurturing of Dr. Tarrasch and Steinitz, along side of the American ideas of “overcoming struggles in hostile positions” with Pillsbury, Hyper-modern chess got it’s last formidable genetic kick from Rubinstein’s positional ideas of handling closed positions by being prepared for the inevitable.

In chess, rules are meant to be broken. Should openings be control of the center? We will see in the sample games from New York 1924, that Reti was a good rebel yet conscientious of Romantic, Scientific and Hypermodern ideas.

Here is the score sheet of the famous Capablanca Defeat by Reti:

Capablanca was in the midst of an eight year long 63 game unbeaten streak (his last loss was to Chajes at New York 1916). Reti ended this run in the fifth round, when Capablanca went badly wrong on the black side of a hypermodern Reti opening. He got his queen stuck in the mud. Experts say this was the wake up call he needed and came back fighting for the remaining rounds.

In round 11, again we have a Reti opening against Tartakower. This game demonstrates Reti’s respect from Scientific style of play along with Hyper-modern as both sides get good control of the center right through the middle game where the games shifts to a battle on the King’s side with advancing pawns. Sharp play leads to an unstoppable exchange leading to a permanent advantage into the endgame.

In round 12, against Bogoljubow, he wins the top brilliancy prize of the event with a beautiful move on move 19 in this position: 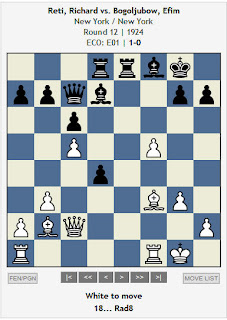 (Don't scroll past here if you want to guess the move)

19: Bh5 is a maneuver that leads to series of forced moves ending with a back rank mate.

Round 13, he beats Alekhine with a London System, named as such by Alekhine identifying similar games played in London 1922. Alekhine explained he merely employed the wrong plan of a King’s side advance in a position that required something different. But on move 21 black seems to make a blunder which allows Reti a Knight fork.

Lastly, the game in round 17, he defeats Tartakower again, quite decisively with an exchange sacrifice in this position: 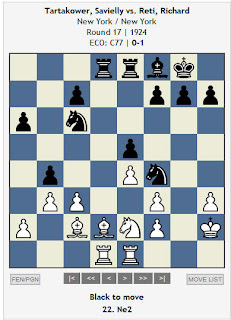 Move 22; … Rxd2. Reti goes for the jugular. The heart of White's problems are the dark squares. Lining up pieces on the a5-e1 diagonal can't be all that good. Why this Rook sacrifice works:
1) White has a bad King's position
2) White has a serious weakness on the Dark squares
3) The Bishop is the key to holding White's Queen's side.
4) Weakening both King's and Queen's sides is a strategic advantage.

So there you have it. A marvelous example of how a Hypermodern breaks rules in the opening when its right. Reti was able to conjure up ideas from his predecessors and contemporaries to finish 5th in this strong event. 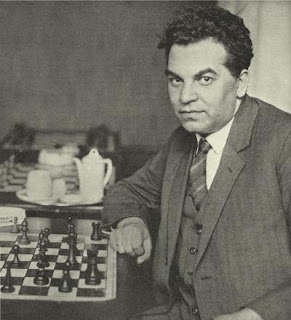 Brief Epilogue:
He set the record in 1925 for playing 29 consecutive blindfold games winning 21 drawing 6 and only losing 2. He dies of Scarlet Fever in 1929 but still has a second book published posthumously in 1933, titled, Masters of the Chess Board.


Posted by BlunderProne at 5:33 PM

Amazing stuff. So sad he died at such a young age. I never realized he was the one to topple Capablanca from his pile of snow.

Great story. Reti the Opening Rebel. I, along with BDK, never knew that it was Reti who broke Capablanca's 8 year streak. Good stuff.

By the way, when are we going to see the Blunder-ware Under-ware? I know you've been working on it!

The use of algebraic notation actually goes back a few centuries where early Arabic chess writing used this method. The number was little different as it went from right to left.
The newly formed World Chess federation ( FIDE) in the early 1920’s was moving to what we see in modern day algebraic notation as it translated easier than …well… English notation. It doesn’t surprise me to see Reti use this method.

I guess Reti is the only person, ever, who got a new book published several years after his death.

We must be grateful to Reti, afterall he gave us a wonderfull opening.