I'd be done by now...if it weren't for ... life. My wife thinks I am ready for the men to come get me with the "I-Love-Me" jacket. She watches me every night do diligence to the CT-ART 3.0 problem set and once a week testing the waters at the local club. My seven kids refer to me as "the frowning one in the corner" as I stair my laptop and point in mid air trying to calculate the forced variations. Oh.. and then there is work... so 155 days was not my goal. Rather, I set a goal to first improve my tactical vision.

When I first read Rabid chess by MDLM.... I thought to myself " Finally, the holy grail!" It spoke to me... a mere patzer, a has-been, wanting to improve past my dogmatic learnings from my childhood. Finally, I had found a short cut to blast me into an improved and more "respectable" rating.

I rushed to the convekta website, downloaded the trial version.... begged for a copy from my wife at Christmas ( 2003) and hit the ground running… sort of. It didn't take me long during the first circle that after I ran through level 10-30 problems I was merely guessing and not attempting to calculating. I was also at the point where I was running to the club or local weekend tournament thinking I was now a tactical genius. I was looking for tactics in all the wrong places and sacrificing with a vengeance. My rating dropped to the lowest its been ( around 1350) in my entire career ( once upon a time I peaked 1600's but that was before they recorded these in the archive prior to 1992). I realized this swash buckling approach to chess was not necessarily what I was supposed to do. After I lost material thinking I had a true combination, I lost intitiative and then the game.

It was about that time that I found Jeremy Silman's counter balanced approached for patzers like me seeking improvement. I tried to apply that as well. The imbalances seemed to be a better approach to my game than the previous swash buckling but I still was missing basic tactical motifs.

That was when I realized that doing tactics until my eyes bled may be a good way to ramp up the ability but first I needed to get the basics down. I modified the circles. I decided to do concentric ones meaning, I would do the first level 7 times before moving to the next.

I felt I needed to be consistent in my training in order for this to work but I also realized I had a life. I committed to doing at least 10 problems a day during the week days and on the weekends I would do at least 30. I maintained that for the first few months and exceeded the quotient several times. By the end of June I racked up over 3000 problems ( all 10-30 level).

I started to track my rating versus number of problems completed. The Charts below try to correlate the "growth". I am now hovering around 1600 after completing 7th circle of level 50 problems. 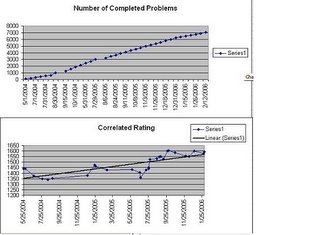 I have to point out that from Mayof 2004 until May of 2005 I was also completing a master's degree program in engineering at the local tech institute... because I had way too much time on my hands ( 7 kids, job, wanting to play chess, a wife.... etc) So my circles were actually attempted between semesters, mid terms and a thesis. Ok, now you see why my wife was ready to committ me. So the rating dip seen in June of 2005 was really a bottoming out of all the life stuff. Since graduating, my tactical regimine has been more deliberate and I've more than doubled the number of problems solved prior as well as gained some 240 points! Well, some have argued that I gained only 80 given the "dip" seemed deliberate :

Although tactics are 90% of my troubles, on the way to tactics are the rest. Positional analysis is a weakness I am attempting to improve using Silman’s concepts, and Convekta’s Strategy 2.0 CD. I am desperate to finish the 7th circle of 90s and anticipate completing by June of 2006. So I’m a little slow and long winded.

Posted by BlunderProne at 5:47 PM 3 comments:

OK, With much interest, I have read a great many posts by the order of the Knights Errant. I too am a wannabe 400 in 400 MDLM. I have to report that I ended up modifying the 7 circles. Instead of running through all 9 levels, I am doing each level 7 times before I move on to the next.

I did this because I realized I am tactically deficient... and needed to see 1-3 move tactics before guessing at the higher levels. I am also taking a slower pace to the quest. I "officially" began the circles in June of 2005. I am now on my second circle of level 60 problems and scoring horribly.

My rating since June however has modestly improved a couple hundred rating points as seen here: http://www.uschess.org/msa/MbrDtlTnmtHst.php?12471987

My question to the Knights, can I become an honorary member given I have a modified circle?
Posted by BlunderProne at 8:58 PM 7 comments: