This past week I’ve been vacationing in with my wife instead of hanging out in with all the other riff-raff at the World Open. I left the chess board behind but could not help keep an eye on the games in the evenings after our daily excursions  thanks to the live feed and replay through the monroi website.

It must have been the side trip we took outside the city to Drummandville ( about an hour northeast of ), where we were sipping café au lait du glace ( ice coffee) outside a little café in centre-ville. It was there that I ran into some chess players in the park. I observed the local wood pushers and promised my wife I would not “engage”.

When we got back to the hotel, I did a google search for chess in and discovered quite a rich culture. hosts a chess club (http://chess.concordia.ca/?tag=montreal-chess-club)  with monthly rated events. For pick up games, PI café and Brainwash Cafe is the place for casual chess and quick events.  But the place that I was most attracted too was Chess and Math center on 3423 Saint Denis. I was able to convince my wife to allow me a quick visit after a trip to a museum that was stones throw away.

The first floor was a chess shop with sets, games and all kinds of accessories for this great game. I made my way up to the fourth floor where the club exists. I met George Fournier, the director of scholastics programs. “ Do you need help?” I was asked. 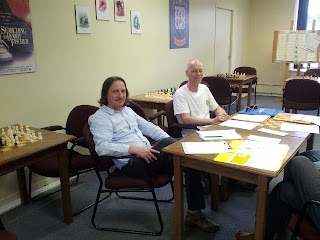 That broke the ice and I got a warm reception from my kindred fellow Canadian chess players.  The Montreal Chess Club has a rich history dating back to the mid 1800’s having notable chess players of the day like Henry Bird, Blackburne, Zuckertorte and George Mackenzie. Back in the 1980’s the club became affiliated with the Math and Chess associations. This seemed to keep the venue going in its form today, catering mostly to a scholastic clientele over the summer with an assortment of chess camps and lessons from local masters.

Mr. Fournier gave me some fliers for upcoming events.  There is an Open Championship coming up July 21-28th right here in at the College Jean-de-Brebeuf. It has an invitational section for GM’s, and several open sections ( Open, Under 2000, Under 1700 and Under 1300) Top prize in the invitational is $4000 and subsequent sections at $1000, $800, $600 and $400. There are prizes all the down to 6th and 7th place in the top two sections. Prize guarantees are because this event seems to have commercial sponsorship, something we don’t see much in the States. Molson being one of the four sponsors! USCF should take note.
There is a second event in August ( 15-19) sponsored by the chess’n math association called the “SuperFest Chess Event 2012” . The venue is the Hotel Le chanteclor at   in the Laurentians. (www.lechantecler.com).

In any case, I may not have “been allowed” to play a game during a vacation with my wife, I definitely felt like I got a cursory “chess fix” by meeting these friendly folks at the Montreal Chess Club.