The Thrill is Gone

Well... not entirely. Life happens and in my house we have it in spades. Something has come front and center causing me extreme reprioritizing of my "hobbies". My blogging and chess club activity have to take a back seat for the next few weeks and probably lasting through the holidays. I WILL be back in full force in 2008 to continue with my half arsed improvement activities and maybe even a surprise!

Until then I will be lurking in the back ground singing the blues.

( Well, maybe not completely in the background as my alter-alter ego Fuzzy D and the Intruders would demonstrate at a recent Local Open Blues Jam)

Q: What's the difference between a Professional Chess Player and Large Cheese Pizza?

A: A Large cheese Pizza can feed a family of four.

All this talk lately about opening preparation with chessbase ( which is awesome... and if I had the time, of course I'd like to emulate my Hero Gary Kasparov...of which it's going on 2 weeks since I washed the hand that shook the hand when he was in Boston...but enough of the digression) has me feeling YET AGAIN, that there is ANOTHER part of my game I can improve. Then I got to thinking that the tool I do use, Bookup is adequate for my opening preparation because .... not to surprise anyone here... I am not a professional chess player. I get a little annoyed by Mike Leahy ( proprietor of the software) when he comes up with a new and improved version and insists I transition. I refused the last round of updates... I may live to regret but I don't care. I also get annoyed at myself for falling into the hype being generated over "novel" approaches. Sorry, I refuse to feel left out of this one.

I go with what works for me. I am transitioning from pure Rote memorization of lines to more of an understanding of where my openings are heading. Long story short, a couple years ago I stumbled on book that was a treatise on an opening system ( the London). A system versus a full blown opening variation, is one of much less theoretical understanding and more of a positional understanding and targets piece placement. This being a simple opening to understand and learn, I learned it from the bottom up. I could see the positions that would arise from typical responses and "knew" how to handle Black's responses rather well. Last year I transitioned from that system because as "simple" as it was... it too was a simple one to defend. But the way i learned it was novel to me.

I used Bookup to import games. I found the program easy to import PGN games and all. Plus there was an actual bookup book that was on the London. I added to the "canned" data base ocncepts from the books I had and off I went. I used the training mode to first work on depth and secondly to work on variations. I liked the training mode in Bookup over chess base and stuck with it.

Fast forward to what I have today. I have a separate book that I MADE for each of my 1.e4 openings, and defenses as black. I put MY OWN annotations in and check it with the "Starting out" series or even verify it with Chess base search on positions. Yes that can be tedious but since I have my repertoire base already established in Bookup, I didn't see the value add of transitioning to Chess base and re-entering all my lines again. I have to pick and choose what I do with my study time carefully.

Besides, Openings is not where I lose most of my games. I'm still tactically deficient despite the seven circles of hell and my continuing spin into further circles. I've learned that openings can provide a false sense of security but once exposed in the middle game, who's your daddy? Topic of a whole other post. Which I may continue... if I have the time.
Posted by BlunderProne at 10:36 AM 8 comments: 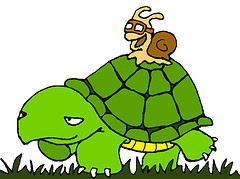 I joined a correspondence chess team through my club and played my first match as part of the Correspondence Chess league of America and a match of our club versus the Greater Worcester club:
I’ve never done snail mail chess or anything like this before. I always feared I’d be playing against someone else’s computer. But I was talked into this match and felt the honor system was worth a shot. In hindsight though... too much ICC blitz made me a bit impatient. So note to self, either tapper off online blitz for a month prior to playing or decline next offer.

My first opponent was against someone who was just as impatient as I was and what transpired was a correspondence version of Blitz. We got email notification of when our opponent moved and what this meant was that both of us were sending move emails back and forth when we discovered we were both logged in at the same time.

We played two games simultaneously with opposite colors. I won my game as white with a Smith Morra and lost as black against a Slavo-Kan hack that I played too passively.


Life in the fast lane.... we were the first board of the match to complete both games. We sit "patiently" waiting and watching as our team-mates progress on move 10.
For those of you in isolated communities, this is a great venue to play some real chess in virtual over the board style. It's worth checking out. For me... I'm not sure I've got the patience for this due to my crippling Blitz addiction on ICC.
Enjoy, BP
Posted by BlunderProne at 6:14 PM 11 comments: 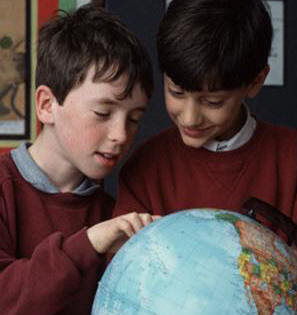 I recall back in middle school snickering over the name of this beautiful lake in Peru. It was because we could say out loud in class not one but two naughty words and not get sent home ( again) with the assignment of writing “ I will not say naughty words in class” 100 times. The reason I bring this blast from the past up is an incident at the club that reminded me of what goes on in the head of a pubescent youth. This past Tuesday, after receiving a highly coveted and hard to come by “ hardcore pawnography” sticker, I decided to place this decal on the back of my clock because it fit…. Oh so nice.

I wanted to proudly display this sticker like a race car driver with sponsor decals all over the vehicle, jacket, and hat. I consider my brainpower being sponsored by all the great chess improvement blogs out there. So naturally, when I received my decal, I immediately slapped it on my clock. Like the way I play tactics all too often, I didn’t give it much more thought because the move “looked so cool”.

Like moths to a flame, one by one, the boys had to come and check out my clock. They’d read it, cover their mouths and snicker like the little school boys that they are. I’d give them the “ What? What’s so funny” Look and they’d shake their heads tap a friend and the next would come up.

An adult, who had not seen the sticker, stopped me in the hall and had to relay a bathroom conversation held by two of the youths:

Hormonally Imbalanced Teen1 “ Did you see Duval’s Clock? That was hilarious!”

Hormonally Imbalanced Teen 2 “ Yeah, it was funny, But I thought it was bit immature.”

Having then told me, my friend realized he needed to see what the raucous was about. Upon seeing the “pretty raunchy clock sticker” ( as described by yet another teen), he grinned, shook his head and walked off. What’s so wrong about “ Hardcore Pawnography”? Even the captain of the Boston Blitz commented “ Can’t put that on the mini van.” If surfing can have “Sex Wax”, a well respected brand for surfboard wax, then I declare, Chess can have this one!

Thank you CL for put the Controversy back in chess! I haven’t seen this much commotion since one GM punched the other at a late night disco over a beautiful WGM.


In the spirit of CL, I played this game with Larry and sac’d a bishop early on like I meant it. ( I wasn’t paying attention and by move 11, after making a rote developing move I was faced with a classic central fork of my minor pieces). So I played it like I meant it…and grabbed a GOOD

pawn and hung on. I whittled my 1700+ opponent down and rode it to the end game like trying to sneak a Harley home after closing time. I rode it hard and put it away wet as I pulled a miracle draw out of my ass. Below is the PGN:

I had Black and played the Slav:

Lord of the Flies 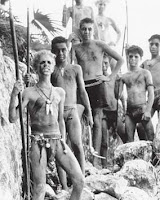 I was surrounded by kids last night. To the left, to the right and even behind me were kids. I felt like the odd uncle who nobody thought to invite for Thanksgiving dinner but decided to show up. I got seated at the kid table. Like the kids in Lord of the Flies, they sure figured out how to hunt a wild ( old rather) bore ( yeah... boar) like me. Once again, directly opposite of my white pieces was none other than my 60 pound nemesis from Whoville.

That seemed cool and it did push her back to d7. But I exchanged down and gave the intiative away

My position was desparate. I played this like a blitz move hoping she'd continue taking my pawns with her pawn. My demise shortly followed.

Posted by BlunderProne at 6:38 PM 5 comments: