Because of the busy schedule, I committed to chess by starting a club at work during lunch time. There are a lot of folks who “play-only-on-chess.com” and were eager to playing someone who played “seriously” or at least, used to. What this means is that there is a mixed bag of competition who’s playing strength is marginally on par with my most rusty capabilities… but I welcome it.
It’s like playing as the top seed in the lowest section of tournament. The expectation is that you’d win EVERY TIME… but reality is I don’t and it’s more embarrassing for me who can “talk a good game” but following through is much different story.  I also know playing up a section in a tournament is always better for improving performance than playing in the top percentile of the lower section.
But I need to take some rust off. So this once a week lunch time chess club is what I have to work with. The “play-only-on-chess.com-players” are also learning to play with real opponents, slowing down, playing with a real clock, and not just blitz and mouse clicks. So, I think I am also providing a service and spreading the enthusiast chess bug around. We play G15 time controls which is quick ( for an old timer like myself), have a club rating system and monthly matches for friendly bragging rights. The time control allows us to get a game in during a lunch break as the corporate world often bookends meetings around lunch breaks.

I use this as a sparring practice. G15 time control forces me to really not dwell to much in the opening and have a plan for the middle game so I can try to capitalize for the point. Problem is that, if I  get thrown a doozy of an opening variant… and I know I should be able to punish my opponent if I had the time, the quick and dirty “play-only-on-chess.com-players” are used to such shenanigans that they once in a while are able to squeak in a point.  I find going back to the database following a defeat sooths the bruised ego and I move on. Tactical training helps me in some of these games as I can see knight forks, discovered attacks and mating nets a little better than this group though that’s changing. As I am learning to adapt to their style of play, they are getting better as well.  So, it’s all good.

One other thing I will mention is how board blindness seems to be a big thing in G15 games for me and a couple of other players.  For myself, it happens when I am short on time and I hyper-focus on a small part of the board.  Others talk about how the clock is a huge distraction… talking about increasing time limits for the game. I’m reluctant, as I think this is good training for us and levels the playing field.  I’m older and rusty. Short time controls give my younger novice players a little more of an advantage as well as forces them to work within the constraints. 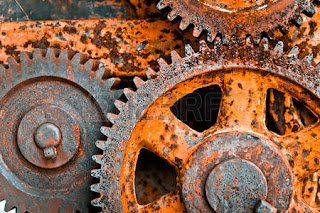 Sparring is good practice no matter at what level. I am using this opportunity to find ways to improve my quick chess skills as this has always been a hindrance for me. I also think if I can improve my ability at these time controls, my abilities at “normal time” will improve especially where I have run into time trouble. Learning how to be flexible with odd openings and players who play “out of the book” on move 2 or 3 is also good practice for me to better understand my repertoire and when mainlines are not played… how to capitalize on them…eventually. Tactics is still my middle name and I practice these as a baseline foundation almost daily. Learning  how to efficiently and consistently defeat players of developing strengths at my “rusty-yet-barely-above-novice-playing-level” is good to keeping my ego at check. I am blunderprone after all.

Who knows, maybe I’ll play in an OTB tournament later in 2018.  See you on the other side of the board.
Posted by BlunderProne at 3:34 PM 2 comments:

Two years slipped by and it feels like yesterday. Let’s see, since my last post more “life stuff” happened. My other parent was in her last chapter, I changed jobs, kids got married, and lots of travel. Since my last real active blogging days 4 or 5 years ago, my priorities have changed dramatically in terms of chess. The time it takes to dedicate to this game is all a matter of perspective and what you really want out of it. Let’s face it, the goal of the 2000 rating is a siren call I see from a lot of us “serious players”.  But it requires constant upkeep of skills, self evaluation, and professional help ( coaches, instructions …well maybe even therapists). Where to fit all that in when life creates tsunamis round you making that chess board the lowest of all priorities.

What bothers me, is that the investment of time I committed to in the past, doesn’t just come back over the board like riding a bicycle.  It’s difficult not to fall into a small bit of self-loathing or pity over the  wasted hours spent learning the game only goes atrophy after months of inactivity. How did I used to play this opening? What are the themes going into the middle game? Does the horsey go next to he tower?  ( well not that bad… but you get my drift.)  It makes it harder to say …”THIS TIME I’M GOING TO JUMP BACK IN”.

How to feed my passion for this game when so many other things are demanding my attention?  I am trying out a path through work. I infected some folks at my new company with the passion for a little competition at work in this century old game.   I have started a weekly club  at work and that’s about all the room I have for it.

Do I want to play in tournaments again?… some day… maybe… just not now.  Moderate weekly sparring at work is OK for now. Don’t  I want to go after that 2000 USCF rating?  Right now, I’d rather spend a few cycles having fun in this game again.

So I wax nostalgically with the new players at work. Since my father passed, I inherited all his old sets and those from the days of the Brunswick Chess Club. I spent some time cleaning up 40 year old vintage club sets from the Drueke Player’s choice series ( weighted) and started bring these in for the company chess club.  I feel like I am playing on home turf as these were the pieces I cut my teeth on and learned this game.  Going back to my roots is always a good thing. 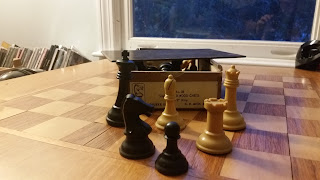 No promises, but I may keep you up to date once in a while.