Despite the 4th round loss...

...I am still ahead by 3-4 rating points! I am on the threshold of 1700 which is fine as I gear up for the World Open. My last round was wild ride against an 1840 player. I was the black side of a Caro-Kann gone wild. ( no comments on the game yet ) I wasn't budging until he does this knight sac on h6. I thought I was going to wiggle out of a ruptured kingside and actually get ahead with a surprise move: 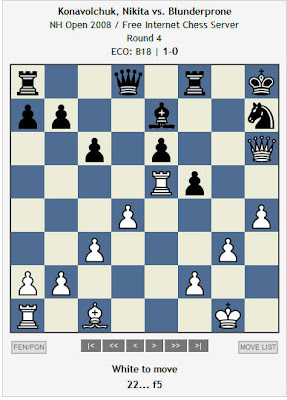 I played 22.. f5 to cut off the communications of the rook and queen on my full frontal King showing. A couple moves later I pulled a Bxh4 as well and almost queened. But at the last moment as my opponent made time control with only a minute to spare I pull a boneheaded move and lost the game. In the words of Maxwell Smart " Missed it by THAT much"

I was hard not to buckle over in pain but I tempered that with the fact that I still gained some rating points plus, had I won, I wouldn't have won any prize fund. Everyone I played was over 1800 except for round three, who was almost 1800 and had a bitching chess tattoo that would impress Chessloser: 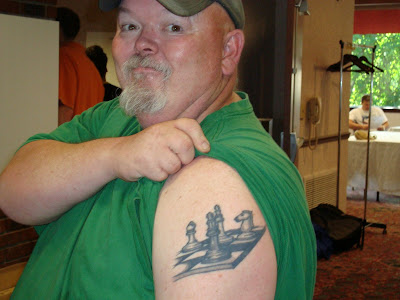 I felt pretty capable holding my own against 1800's. What keeps me where I am at is still not seeing critical tactics despite my tactical training. Overall, the openings held up well and a couple months back I was concerned that this was my weakest link. Well, this week, I'll be sure to do lots of tactical puzzles as a final polishing for the World Open.

Posted by BlunderProne at 8:25 PM

off target but as a fan of double bishop sacs I thought you might enjoy this.

Are you playing in the World Open.

If you are playing I would like to say hi.

I am not sure what your issue is. The table you linked is the result of the NH open. I am listed as number 18 in there in the U1900 section. John Brady in number 9.

What are you asking?