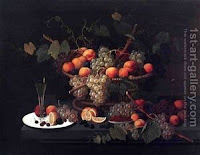 Break out the Champagne and Fruit, we have a winner!


In the final round battle on board one, Anderssen and Wyvill duked it out in the final 7th game of the match to decide the victor. After 5 rounds Anderssen almost had the match sewed up with a score of 3.5. Since draws didn't count and he needed a score of 4, they played on. Wyvill used a rook sac in the position below as white on move 36 Rxc7!

Why this works is it creates a passed pawn that is hard to stop especially with Anderssen's rook trapped on h6.

Anderssen came back with his own rook sac trick in the final game with this position as white on move 17Rxf5!:

Why this rook sac works for Anderssen is that uncontested Bishop on f6 in "scoring position" once the queen is in the end zone the game goes to Anderssen as well as the first place prize fund of 183 British pounds . Wyvill walked home with a total of 55 British Pounds.

Howard Staunton, exhausted and sick as he was battled for eight rounds with Elijah Williams in a close match decided with a final round decided by an attack run dry by Staunton. He lost steam and the initiative and further comments in his manual of " an imbecile defense". I give them both credit in the match for some interesting tactics like William's queen sac in teh first match and Staunton's 7th match draw with a forced three fold repetition after a deflection sacrifice. Williams walks out with 39 pounds and 5 shillings and Staunton in fourth place, recovers a mere 27 of the 500 he invested for the event.

The Captain's ( Kennedy) ship sank against the Hungarian Josef Szen after 5 rounds. The fourth game match was interesting as The Captain almost had Szen. Coming from behind where it appeared that Szen didn't foresee a knight fork against his rook and queen, manages to imobilize the captain's extra pieces and advance a trheatening passed pawn. The Captain gives back the material to stop the advance but its too late and he loses the game. So 4.4 under that one is definitely a must see game. Szen finishing in 5th place takes home 20 pounds and the Captain retains 13 pounds and 15 shillings.

For Horwitz and Mucklow who finished 7th and 8th, a pittance was retained along with a nice ivory chess set. Not a bad prize considering they were handcrafted.

There were additional provincial matches that followed the general tournament where Lowenthal and Bird did get to play but Neither won any of the four cash prizes ( of much lesser value than the general event. Of these " Jousts", in order of finish were (1) Mr. Boden, (2) Mr. Ranken (3) Mr. Hodges and (4) Mr. Brien.

Anderssen was considered the best player at the time but had to earn a living and stopped playing for several years until in 1858 he played the young Paul Morphy and lost. This woke him up out of retirement as he played and won the 1862 London tournament. In his later years ( over 50) more tournaments of round robin style were popping up and he took full advantage of these winning 5 more and place in the top three of most he entered.

Staunton played chess for a couple more years following this event but was clearly past his prime. He hung up the chess board and settled into editing the text of Shakespeare with a local publisher. This edition appeared in parts from 1857 to 1860, and Staunton's work was praised by experts.

Wyvill was an active member of the Parliament in the 1860's but not much is known about his chess career following the London 1851 event.

As for Josef Szen, not much chess was played following this event. The suppression of the Hungarian Revolution of 1848 brought with it a ban on all club activities, including chess clubs. The ban was in effect until 1864.

I am working on cleaning up all the games into one Chessbase file for those interested. These will be complete with my commentary along with fritz analysis. I am looking into setting it up with positional training markers as well but this won't be done for a little while. If you are at all interested in the work I've done here, I don't mind sharing it and would love to email it to interested parties. Contact me by dropping an email at george (dot) duval ( at) comcast (dot) net.

Phew. I'm exhausted with this time travel. However, I am revving up the way back machine for Hastings 1895. Stay tuned if you want.

Mr Peabody,
I will follow your Hasting analysis closer that this last series. 1895 is more my kind of chess Vienna Gambits, King Gambits.
Mieses, Schlechter, Janowski, Chigorin, Blackburne and of course Steinitz Battle of Hasting.

Here the question. it looks like Chigorin get proper compensation for his rook in play . Does it hold up under thorough analysis???

what is the term?
'A labor of love' youve created.
bravo! you are a real true gem blunderpone!
warmest, dk

http://www.chessgames.com/perl/chessgame?gid=1044204
I'll answer my own question. Sorry to jump ahead.

@ tak: jumping ahead? Hey that's what time travel is all about.

In that game, at first glance and in Lasker's comments on the game, Chigorin does get compensation for the AWOL q-rook since Pillsbury's queen rook is not able to free itself. Initiative and attack on a central king is a little too risky for me to deliver at my level.

Staunton invested 500 pounds in the tourney? In 1851, too...that guy must have been rich or something.

I enjoyed this series, and looking forward to Hastings!

back in the day, Thoreau said a dollar a day was a wage for a mans work. dont know how the pound compared to the dollar then, but this was a goodly amount of money indeed, and more to the point, meant that Staunton was NOT imprecunious [Lat. pecunia = cattle, cf. 'peruniary gain']

Great stuff as always, and I look forward to the time travel :)

Thanks for the education. I think you are taking over as the 'PBS of chess bloggers.'