Fear and loathing in the U1900 section at the N.E. Open

Gonzo chessplaying in the class section of the New England Open as reported by a gonzo player. ( warning, long rant of a post hopefully you will find amusing)


The U1900 section at this year's N.E. Open presented a large and diverse group of 34 players. We had good local club representation by both Metrowest Chess and Boylston Chess clubs, as well as some out of staters join in the fun. We had some strong teens like Jessica Wamala, Anabel Bacon, David Yasinovsky, Tim Bromly and Jacob Gillis. At the other end of the spectrum were Harold Dondis and John Hallahan who played all six rounds. The Kids did alright. Kevin Ma tied for second place in the section with 4.5 points. David and Tim tied for third and the under 1700 prize. Top prize in the section went to Dale Lyons of Vermont finishing with 5 points After taking a bye for the last round! Either way, he secured first place ( tie at worst) with the 1/2 point bye since all the others had only 4 points or less.

Somewhere, right smack dab in the middle of the section was where yours truely sat and finished. I've had the summer off from work and devoted the time to chess ( and taking care of a "honey-do" list). Before you ask, no I am not a teacher... just an overworked engineer working for a comapany that offers these things before the employee burns out, goes postal, or ( in my case) the division gets sold.

My goal was to reach 1700 and after the results in Stamford at the Northeast Open, I was almost there. but this is where things drifted south. My poor scores at the Club, the Continental and the Northeast One-day events had my rating doing a freefall. This weekend was going to be my recovery tourney.

First round I was paired with Bruce Stone from NH, we joked because both of us get beaten up on these weekend events. So it was like " let's get this over". I had a fairly easy win after he blundered last and lost the exchange leaving me a rook for a Bishop.

Second round I was paired against Mark Goodwin, an 1800 player who ended up finishing second. I thought I played rather solid against him making sure my thought process was improved over the past month's fiasco. I reached a quiescent point in the game had I exchanged down would have drawn ( Mark told me after the game) ...instead... well... I lost.

Let me digress a bit about the playing conditions. The Sheration Four Points hotel in Leominster is your typical weekend chess warrior hotel with enough banquet halls to host several events. Fortunately, a battle of the bands was not simultaneously scheduled, rather, a wedding party on one day and a car show on another day.

I'll digress some more... it seems like chess tournaments and car shows go hand in hand in New England. It seems like the Continental Open is ALWAYS on the same weekend with the Four

Seasons Rambler club gathering in Sturbridge ( last weekend of July). RAMBLERS! These are classic "family" cars ...not hot rods or "muscle cars" ... RAMBLERS! ( please don't take offence). They usually have a loud PA system with "oldies" music playing. Which makes for an interesting challenge during the Saturday afternoon rounds to concentrate. It's bad enough the voices in my head tell me to make bad moves but when its done to the tune of Roy Orbison's "Runaway" my game tends to go in a direction that wasn't planned. I've learned to bring ear plugs to these tournaments because you never know what stroke of genious the hospitality folks at the hotel have in store.

Now I'll come back to Leominster. It was a much quieter setting. The cars were outside ( about 200 of them. Chevelles, Mustangs, street rods, Cameros and only 3 Ramblers). The PA was buffered by a whole side of the building that soem of the chess players didn't even notice the car show. The wedding party was apropriately buffered by 2 banquet halls between us. The only noise we had to contend with was an annoying fan belt in the HVAC system that sounded like a classic star trek phasor on stun. I was glad to have my ear plugs.

One player was not too thrilled about the oscillations from above and asked ( demanded rather... while pointing to a section in the Official USCF rule book) the TD to be moved to a separate room with less noise. We lost the skittles room as a result.

Rounds three and four were my worst. This is where the "fear and loathing" comes in. Tim Bromly plays at our club and I have beaten him before. His rating has been steadily climbing over the past year and is closing in on mine rather quickly. So the fear factor hit. I knew I needed to beat him or lose another pint of blood from my already depleted rating. Even more interesting was the fact that both of us play the same opening system as White... which was the side of the fence I had.

I decided to take him into 4.dxc5 variation of the london system since I was looking at this obscure sideline for a while. By move 12 or so, I came out of the opening on top with astrategic advantage on the queen side carrying 3 connected passed pawns. Then I took a risk. I calculated what I thought was the only three replies for black and took the calculated risk. Tim played the fourth reply I never considered and I squandered away my strategic advantage as well as the point. 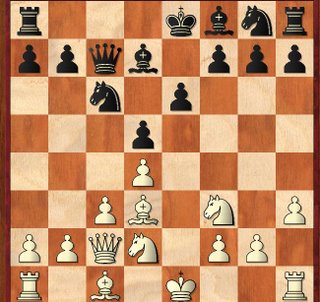 Now, my toxicity level hasn't changed much since 1990 with only caffeine being my indulgence. Nor do I have the legendary Hunter Thompson's code of ethics... but there was a period where I did frequent Greatful Dead concerts and much other misspent youth episodes ...that perhaps a flash back might have caused my next move 9... Nb4?? I swear the bishop on d3 was gone when I lifted the knight and placed it on its square. Blunderprone strikes again. It just looked like such a good move. After the game, Jacob even wondered how he missed that.

I got up and went outside to clear my head. My game had clearly taken a turn for the worse. Outside, the kids mother was having a cigarette. She could see I was not happy. What do you tell the boy's mother? I remarked at how I blundered and cursed myself and ranted a few more times. I went back in and played it out until he clearly had a won position ( mate in two). Later he asked his mother if I was crying. I was too pissed off to cry... I was swearing under my breath...but CRYING? Yeah..inside I was.

My club mates, Mark Kapreilian and Joshua Haunstrap tried to give me some good advice.

"Well, what you have to do is stop losing" says Mark our club president.

I must have had that look about me like I was about to throttle him or something becuase he tried to clarify the statement. " What I mean is that you have to decide not to lose those games with lower rated players and take those risks that you do."

Joshua had a similar take but it was a little more clear. His suggestion was to play more conservative with the lower rated players and take the risks with higher rated ones. Opposite to what I was doing so to speak. " It's better to slip a draw to a lower rated player through conservative play than it is to lose through a risky tactic."

My last two rounds I managed to win and end up with 3 points out of 6 and I lost only 4 rating points altogether. It looked like Mark had a hard time in rounds 4 and 6 taking his own advice.

Posted by BlunderProne at 8:11 PM 5 comments: