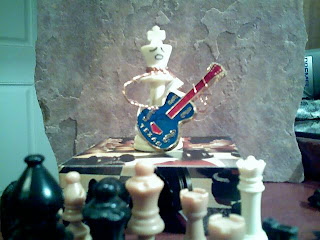 This post is for all you folks out there that makes this game that much more fun.

Because chess does rock on all levels. When you win you feel like a rock star, when you lose you feel ready for rehab. You bounce back from bad gigs. Sometimes you feel like you are on top of the world. It brings young and old together. Chess holds no prejudice. It's pure freedom. It's the love child of art and science.

For those about to rock, we salute you.

Hope you all have a good weekend.

I thought I'd post this win from the Eastern Class last month seeing to how you all seem to appreciate the pawn mate.

I like when I can see a tactical shot in a game a few moves ahead before my opponent can. In this rook and knight endgame, I had active piece play against a passed pawn with even material. When my opponent tried to make a run for the h-pawn, I had the choice of playing defensively and going after it or playing a little more aggressively. After 37.h5 I then saw a nice set up.


Regardless of where he moved the king, Rh4# is such poetic justice for racing the pawn up to h5 blocking his defence.
Posted by BlunderProne at 7:36 PM 6 comments:

I broke another losing streak Tuesday at the Club. I was tired, I thought I was going to be paired with the ever so generous Mr Bye, who grants me a point when I suck wind the first couple rounds and I am the lowest rated player. I showed up for the pre-event group tutoring with David Harris and figured if I didn't get paired, I'd stick around and watch a couple games and call it an early night.

But, No. We had a late entry who was granted access to our section and I was no longer the odd loser out. My opponent is a part time college grad student working full time. His youth could have been a strength, but he was unfamiliar with my lame ass opening and I decided to mix it up 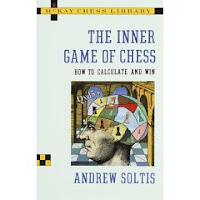 even more and try a bayonet attack like I successfully stabbed out at the Eastern Class a few weeks back. ( It was a win so I didn't blog it).

I've also been reading Andy Soltis' The Inner Game of Chess, How to calculate and Win. This book takes Kotov's, Think like a grandmaster, and spoons it out into patzer sized portions for me to drool down on my bib. Some substance must be starting to make its way in because this game ( as annotated below) had me seeing the position I wanted 3 moves before it happened. It was especially sweet seeing the pawn mate coming up.

Posted by BlunderProne at 7:37 PM 8 comments:

An oddball from Zurich 1953

The match between Najdorf and Kotov in round 11 of the Zurich International Chess Tournament of 1953, was a little odd since most of these games are Queen pawn ( mostly consisting of QGD) games and those that had 1.e4 were Sicilians. But this game in particular was the only Caro-Kann. Bronstein narrates that Najdorf was anticipating Kotov to play into a Sicilian ( Najdorf variation) but was surprised to see the c6 response.


As I traveled back in time, trying to imagine what the eleventh round would have been like at this event, I imagined I was looking over the shoulder of these two players. Early on, I looked at moves like 7.Bd3 and how Kotov DIDN'T exchange the bishops. Something I would have done. Since, its a pain in the ass in C-K and an opportunity to exchange for White's King side Maurader, I always tend to welcome ( to a fault).Rather, A couple moves later, AFTER he castled short, White decides to exchange.

Bronstein commented later that the pawn majority on Kotov's King side versus the Q-side pawn majority of Najdorf's meant a better end game for white and how the queen exchange was not a good plan for black. I have to agree. However, had Black exchanged bishops on move 7 instead of weakening the kingside pawns ( or even by move 10 prior to castling) might the situation had been better. Then the queen exchange might have worked.

I'm open for some ideas on this one.
Posted by BlunderProne at 5:22 PM 2 comments:

To put things in perspective, my week is going much better than a soon to be former Governor of New York, Mr. Eliot Spitzer... who advocated back in 2001 as attorney general for a piece of software for banks to flag the feds when suspicious activity was occurring on bank transactions... had that very same piece of software flag him because he was to flamboyant to use the local hookers.

Have said all that, today's folly is a result of a blunder out of greed. Which also keeps in line with the Vatican's attempt to revamp the seven deadly sins. Though, what I was doing was going after a knight, I don't consider it to " being obscenely rich".

The final position looked like this. I had just played 24. ...Rd6 when white calmly checked me on the square I was no longer protecting. Should have gone 24 ... Ne8 instead...like what I was really thinking... BUT NOOOO... I thought I had that Knight... I was salivating. ( after check white goes to f5 forking my rook and queen... I decided to call it an early night and resigned).

The game in its entire folly is below:

Posted by BlunderProne at 8:20 PM 4 comments:

My Last round loss at the Eastern Class Championship

First, I still haven't figured out the proper formating for chess publisher. I've tried to add the HTML code suggested by LEP and others but kept F*ckin in up. I tried the drag and drop idea of formating as suggested by Polly. I think part of what I am up against is this BLOG has a pre-formatted window size. Since folks have complained about just putting a pgn dump on the page for the user to cut and paste to the pgn viewer on the links, I've decided to leave the chess publisher as is.. and not devote my life to debugging a crappy applet.

This game was against a strong B player who out played my Caro-Kann. At some point I allowed him to come in on my kingside... hindsight, I might have been better off castling Q-side or staying in the center as my h and g file became problematic. I included some of fritz's alternate lines in this post.

My Losses are getting better... and so am I

My last three losses were not due to any horrendous blunder. Merely I've been losing it in the end game and not playing it correctly. I have good tactics, good positions in the middle game but once the position quiets down to the endgame, my soft under belly is exposed.
At least I have a clue as to where I should focus some extra study time. Here is a sample from the weekend of good times with the high octane Chess loser and kindred spirit. We sure had a good time. We'd help center each other prior to the start of each round.
Posted by BlunderProne at 9:04 PM 7 comments:

I just got back from the Eastern Class Championships in Sturbridge. I'm too tired to give a full report ( besides I think I will leave that up to Chessloser who WAS there .... we both had an awesome time).

I finished middle of the pack considering I was coming in at the bottom of the B section. I had two wins and two loses all against higher rated opponents, so I think over all I won't be losing any rating points. The good news is that the losses were not because of any howlers or wild-ass pop shots gone bad.... I was merely outplayed in both instances. The competition was tough but it was fun.

Some time in the near future I will post a couple of these losses.

I will leave you all in suspense about the CL's performance. Be sure to catch his report on Tuesday.
Posted by BlunderProne at 9:20 PM 8 comments: