This is how it went down...

Back on this post, Jon Jacobs ( FM) commented about improving the mental game or as he summarised it, " Fire your coach and HIRE a Shrink." There's much to be said about that. Tonight's game was my quickest loss I can remember. The game lasted 7 moves and ended in mate. A horrible excuse of a class B player since I studied this particular line as white 8 months ago in response to the caro-kann if I had white! Since that was 8 or more months ago, much has been pushed off the stack so to speak.

So in defense of the abysmal game I played.... Here is an attempt at the inner game my shrink will be hearing about.

It was a typical day at work. Filled with 80% of non-fun stuff and 20 % of the stuff I went to school for. 4PM rolls around I pop out of a meeting to call my daughter to see if she has everything she needs to do dinner that she volunteered for. I make a list of things to pick up on way home...to time it so she can cook the main dish, that I can scarf quickly before running off to chess club and make my move as my clock's time will have elapsed. Of course, I was delayed getting out of work because the 700 pound gorilla who's meeting I had to run in his absence was now chasing me for how what happened in his absence. 6:15 I pulled into driveway, threw the spag sauce at my daughter and set the table. Made a feeble attempt to log into work to give the gorilla his update on line... DAMN VPN was down.
DING! dinner! Screw the update... let's eat and go to the chess club. 7:10 rolls around and I dash to the door with set in hand. I pull into the chess club parking lot at 7:35 and run in to find where my board is and who I am playing. My clock is running and my opponent has played 1.e4 ( only five minutes has elapsed on my clock) Sweet. I write down the game data, who I'm playing, take my coat off etc. My opponent is nowhere to be seen. I play 1...c6. ( BTW... IT's only 7 moves try to follow along.... I have a diagram at the end)

My opponent comes back with a coffee. We shake hands, he sits and plays 2. d4 I respond promptly not wanting to waste any more time and get into a similar time scramble like last week 2...d5 3. Nd2.

Final position after 7.Nd6# I have black.

...And the childeren shall lead

Probably the worst classic Star trek episode was the one titled like this post. The premise was the Enterprise reaches a Federation colony where the adults have all killed each other but the children play without care. At the club last night, I felt like I was beamed down to that colony as the pairings had me in the middle of the kid section.
No one noticed I was using one of Reassembler's neurobics and writing three moves right handed and three moves left handed. My score sheet wasn't any less legible mind you but it was interesting to note I was much slower left handed.
I played one of the older kids rated in the 1800s and had a really good game with him except when we were BOTH down to 5 seconds left on the clock my processor wasn't as fast. Beam me up Scotty. I was about as fortunate as a red shirted ensign getting beamed down with the away party for the first time.
Here's the game with comments.
Posted by BlunderProne at 10:48 PM 8 comments:

Perils of straying away from opening principles

This game was played at the club last night. I've been bouncing from Silman's endgame course to Sierawan's Winning openings and also his Strategies book. A nice post holiday study mix.

I knew Mr. H was prepared for a Smith-Morra since last time I had white that's how things went. I decided to switch hit and play 1.d4. The game is below:


I played a Sarrat Attack like my Old school Harlow B Daly Maine Chess champion of a previous generation used to play. It was very much like the London system except the c-pawn goes out to C4.

The problem was at move 10 I should have stuck with opening principles and castled short first then look at locking up the center. I saw the knight coming in to h4 as well. Perhaps even an escape pod for the Bishop with h3 might have been good too. Instead I decided that an additional pawn move was justified because it seemed to cement the position for Black.

I deserved the pawn droppings. But here's the odd thing. I had a nice false sense of confidence walking into the endgame courtesy of all the Silman reading lately. I actually had delusions of possibly being able to draw that game. I bailed out when my opponent pulled a " chicken coop" (outside passer) on me.
Posted by BlunderProne at 9:47 PM 6 comments:

Ice Fishing with Silman and Polgar

Well, Reassembler mentioned about a Total Chess Immersion Unit for Christmas my solution is rather low tech and most likely seasonal. First, you have to wait for the local lake to freeze. Then you haul your bait, auger, tip-it traps and stuff out on the ice. Drill a few holes manually, because the aerobics are good for you and then you pop open one of these things to shelter you from the elements and read a good chess book: 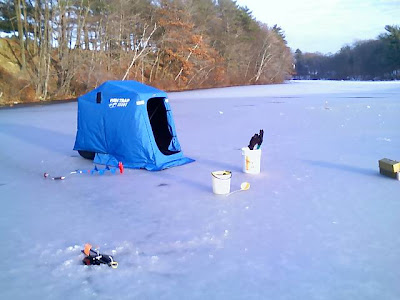 I caught absolutely no fish but enjoyed the solitude. The vibration table and sound system was not installed. I made it through a few chapters of Silman’s Endgame course and quite a few problems of Polgar’s Brick. Without any other distractions, this was the most productive training session on ice. 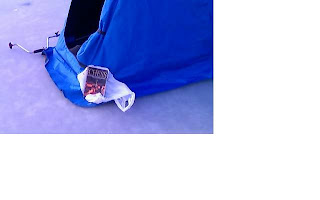 I was going to enter a new video from the Fuzzy collection but then I saw how large I was back in October. My other quest is for a reduction I decided to stay more positive. The Band is getting back together next week and this year we will be doing more recording in my basement studio... so blues will follow...including my original chess blues " I opened with E4...(but then he threw me out of the book)"

So, Huzzah to all knights, Friends and fellow chess addicts. I was at the Metrowest Chess Club the other night and, to use the blog-names, Reassembler, Globular, Harvey and I ( not to forget Steve, who was TD adn doign the pairing in the background) were all around the same table chatting F2f prior to the round. Not one of us were making resolutions as to what we expected to accomplish this year in chess. Smart move.

I wanted to post the game I played. It was interesting... up until move 15 when it looks like a typo in my transcript made an illegal move... but I couldn't figure out if I actually made that move. If I did, my opponent didn't flag the error and the game continued. My daughter ran into a similar situation a year ago at one of the state events. Both her and her opponent had the board set up wrong with queens on opposite colors. Since the game continued beyond 3 moves without either of us recognizing the error, the result was still valid. It's quite possible I did make this odd knight move... and I could have since I was suffering from PTHD ( post Traumatic Holiday Disorder)... I feel a little remorse.
(EDIT: Here is hte game up until the notation gaff... it does have the nice combination mentioned as it was well after move 15)

LEP: I hope this helps the visualization.


I won the game... I had black against a 1700 player and played a Caro-Kan against a King's Indian attack. In the early part of the game I was able to establish a the thematic e5, d5 pawn pair unchallenged. After he fianchetto'd the king bishop, I locked it up with pawns on e5 and d4, and c5 against his at e4 and d3.

This played into his plan which I had no clue. I have, however, been reading Yasser Sierrawan's book on Openings. I was getting a nice expansion on the queenside when I was able to deliver a b5 with the central pawn mass. But I was concerned about the kingside and White's diagonal invasion. Long story short, I put the queenside on hold and played to challenge white's king bishop which he defended and put as much pressure on ripping open his kingside as much as possible. I manged to open the h-file and that's when the scribing error seemed to dominate. Sorry, I can't post this one due to its incompleteness. To make matters worse, as things were in a fragile positional balance on the kingside, I sprung into action on the queenside with a rook forking Knight sacrifice that he didn't accept. Because if he did... his house of cards on the kingside was about to tumble. Instead he attempted to pair down the complications.

The endgame had me with 2 rooks against a bishop and rook with a couple of extra pawns. I was able to exchange the extra rook for the bishop and another pawn leaving me with an easy 3 pawn up endgame with rooks.

Valid or not... It was a nice positional battle ... I hope the descriptive narrative of the melee will suffice in lieu of bad notation.

This year I am going to play more positional games as white. Dusting off the d4 games I used to play except not to be so reliant on the London system this time. The problem I have with e4 is i feel like a fish out of water. Gambits was a nice diversion ( when I could play them) but I found too easily neutralized by the stronger players. But the jury is still out... I have a few tricks ( books) up my sleeve and may pull out a closed positional Sicilian.

In any case, I am back... will probably update the blog on occasion... but the time for me is better spent on studying. I plan to update the blog with more of my learning experiences over the board.
Posted by BlunderProne at 12:38 PM 4 comments: