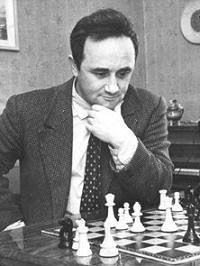 Born in Odessa, in the Ukraine on March 8, 1925, would have made him 28 years old at the time of Zurich. In his youth, he was a fine basketball player and earned a Doctorate in Physical education before turning to chess. World War II delayed his development as a top chess player. It wasn’t until 1947 when he gained recognition by placing 6th at the Ukrainian Championship that his chess career started to climb. By 1949, he was making third place in the USSR championships and won a semi-qualifier. In 1951, he was awarded the title of International Master, followed by International Grandmaster a year later.

This brings us to Zurich 1953, where he qualified at Stockholm in 1952 to play in the candidates match. Geller takes on Najdorf in his familiar turf in round 13. Najdorf plays the Black side of a mainline Sicilian Defense of the variation named after him. Geller takes him into classical territories of the line with a prepared variation that was meant to offset the positional feel of the game and make use of the developmental advantage for White. The prepared line takes control of Black’s light squares and begins a queen side advance. Underestimating it’s potential, Najdorf attempts some tactical ideas of his own but Geller’s play is much deeper. He refuses the gambit pawn offer and uses it as a weakness to get a positional advantage for his knight. After the pieces are traded off, Geller demonstrates how his centralized knight is stronger than the bishop.

Geller is known for making advances in the King Indian’s defense. This is known today, but was only making some ground back in the day of Zurich. Thus, in round 17, against Euwe’s passive treatment of the once benign defense, he is overcome by Geller’s strong positional advantages.

In Round 19, he shows Boleslavsky a variation of the Schevengin that transposes to Dragon like venom as he entices White to expand the pawns on the king side. Opposite side castling allows Boleslavsky to start a king side maraud. Geller decides to open up the c-file with a rook sacrifice. ( shown here) 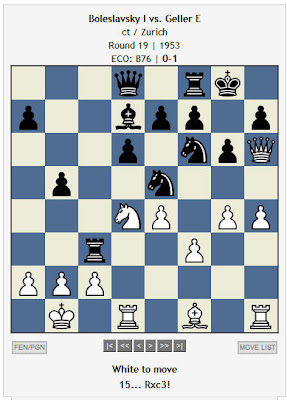 Then he gets a couple pawns towards the endgame and is compensated enough to pull in the point.

Round 25 has Bronstein on the ropes after he admits to passive play. Another instance of opposite side castling which allowed White the opportunity of rapid development. Bronstein miscalculates and advances on the queenside and overlooks the fact that White had a bishop on g3 covering the b8 square. It allows Geller to break through and offer a rook as he gains an advanced passed pawn.

In the next round, He plays Gligoric and demonstrates how to win in an endgame with a strong initiative despite his opponent having two passed pawns. Incredible.

If that isn’t enough, in the following round ( 27), Taimanov attempts to take him down an obscure path of the Ruy Lopez with 3…Bb4. Geller’s opening knowledge and transpositional abilities plays it more like an Evan’s Gambit with tempo. This turns into a tactically sharp mêlée with Geller sacrificing two pieces to open up Black’s camp. The final position is shown here: 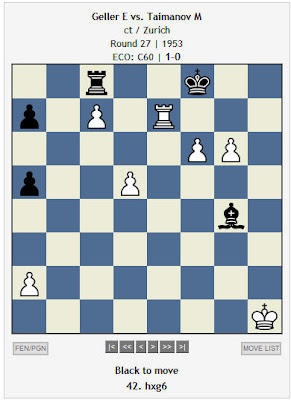 Bronstein’s opening comments on the game:

“ Why is it that today—as compared to ten years ago, let’s say—so few masters will go in for a fierce combinative attacks, with piece sacrifices? More than any other reason, it is because the art of combinative defense these days has reached such a high level that in the heat of the battle it occasionally becomes difficult to determine who is attacking whom.”

His best candidates cycle was in 1962 at the Stockholm Interzonal where he finished second to Bobby Fischer. At the Candidates match he was only a ½ point short of playing for the title at Curacao, tying in second place with Paul Keres. He was known well for his openings expertise pioneering the development of the King’s Indian Defense, new variations in the Sicilian Defense and introducing the Geller Gambit in the Slav. He acted as Boris Spassky’s second for the World Championship match against Fischer in 1972, as well as acting as second for Anatoly Karpov and Tigran Petrosian.

He played strong in senior tournaments up into the 1990’s until the age of 70 where he tied for first place with Smyslov in 1991, and won clear first place in 1992. 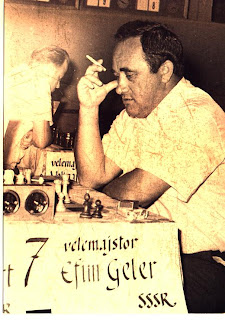 As a side anecdote, One story he tells in his autobiography (Grandmaster Geller at the Chessboard, translated by B Cafferty 1969) is of playing in Belgrade for the Soviets against Yugoslavia. He complained that the Soviets didn't get any applause or credit for their games but in one game he was trying to find his matches in his pocket but couldn't. After a little while it became obvious to the audience what his problem was and out of the audience flew a box of matches, which he caught. That was the best applause he got.

We'll return to our regularly scheduled chess studies after this vacation.
In the meantime, I bring you : 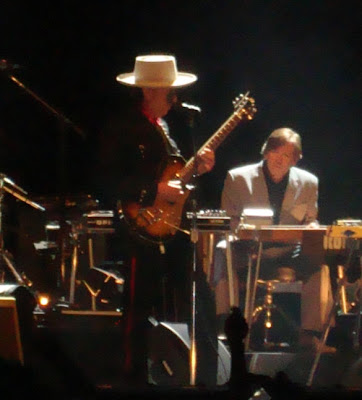 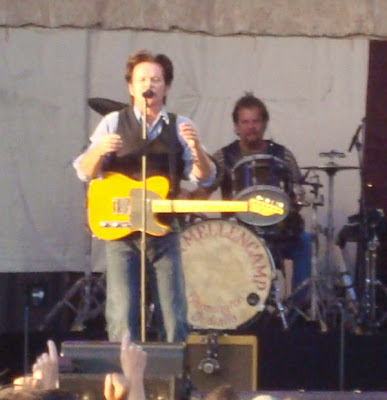 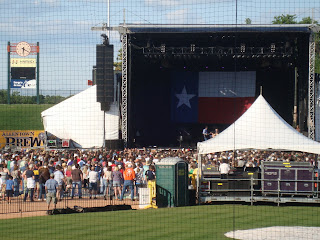 Willie Nelson opened up the act as seen from these crappy seats before I joined the mosh pit.

Meanwhile, I'll be at the beach. 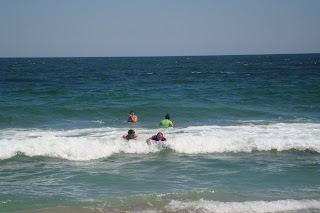 see you all next week. 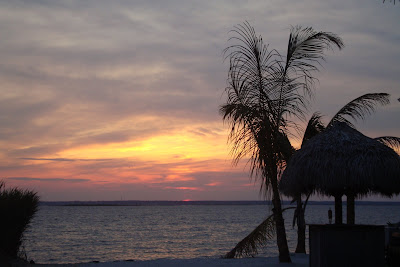 Posted by BlunderProne at 9:36 PM 3 comments: 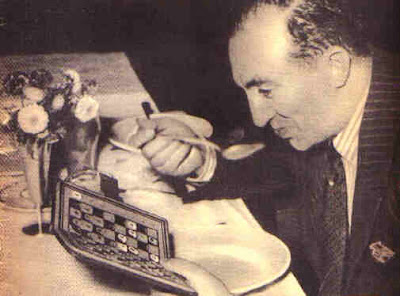 Born near Warsaw Poland on April 15, 1910 would have made him 43 at Zurich. He took lessons from Savielly Tartakower had some early success in Warsaw during the period of 1929-through the mid 1930’s where he won the Warsaw Championship in 1935. He Won a match against his teacher, Tartakower, in the same year. He played in several Chess Olympiads for Poland.

He moved to Argentina in 1939 to escape the holocaust like other players.The Nazi killed Najdorf's whole family, including his parents, wife and little daughter. His second daughter was born in Argentina. He started playing in the Olympiads for Team Argentina. In the 1940’s he started to play in some strong international events winning ahead of some players like Paul Keres and Stahlberg.

He was never considered a chess professional. Outside of chess, Najdorf achieved a similar success in an insurance business and was one of the richest Argentinians after WWII. He owned one of the most presentable sky-scrapers in Buenos Aires.
In 1947-1948 he was ranked as the second strongest chess player but still not invited to the 1948 World Championships following Alekhine’s death. FIDE decided that only those who participated in the 1939 AVRO tournament where the late Alekhine and Capablanca had played qualified for this match.

Let’s look at the his performance at Zurch 1953. In round four, he wins a brilliancy prize against Taimanov. Taimanov had a streak of success against the King’s Indian with a new variation against the mainline that had some circles saying the opening was finally refuted. A little history about this opening that evolved about the hypermodern movement of the 1920’s didn’t start to gain so much popularity until the 1940’s when Bronstein and Boleslavsky found success with making a queen side push with pawns, opening the c-file and targeting the base of Black’s pawn chain on d6. New variations had Black advancing the pawns on the kingside in a race to break things open. Taimanov found a maneuver of his queen’s bishop to favor the solid pawn chain and dance through the dark squared holes. Meanwhile, Najdorf having suffered recent losses with the same line, took upon himself to prepare a relentless pursuit of the king side to settle the argument of the KID being “solved”. He demonstrates great precision and a relentless attack sacrificing first, a pawn then offering a Bishop to keep the initiative and pressure on the White King. 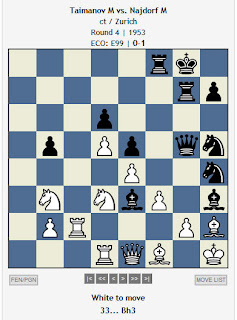 Petrosian in round 6 offers a queen exchange in a materially even position that gives him structural problems. Najdorf picks up the point with a precision.

In round 10, he takes down Stahlberg with an “uncommon Store of positional capital” ( Bronstein quote). This book orthodox QGD has Stahlberg pushing e5 with out enough preparation. Stahlberg was hoping to gradually win through his tactical acumen after exchanging down and simplifying. Najdorf banks the accumulated positional gains and goes into the endgame with: a centralized King, a more active rook, strong bishop and an active knight. There was no hope for Stahlberg.

In round 12, he plays the white side of a main line Caro-Kann against Kotov. Bronstein comments that this was the only time Najdorf played 1.e4 in the tournament, AND the only time Kotov didn’t respond with Najdorf! Perhaps then, the inexperience shows as Kotov allows the Bishop to be captured on the g6 square AFTER he castles which I found a little odd. White focuses on a queen side pawn majority as the basis for his middle game tactics. Black was overly optimistic and tried to make a run with the kingside pawn majority but the structural damage didn’t bode well.

He had a few “GM draws” in this match. One good fight was in round 15 against Paul Keres. He had the black side of a closed Sicilian defense. Keres may have been avoiding the Najdorf variation by playing Ne2 which made for a quiet line with lots of symmetry. Long story short, Najdorf picks up an extra piece towards the end but ends in a draw because of White’s advanced pawn.

Another player who had played Che Guevera. In a wonderful book written by Najdorf's daughter she quotes Najdorf, that this game was not drawn. Najdorf told her that in this game he had offer Che a draw and that he had not accepted it. The game had gone on and Najdorf had won. In fact Najdorf said that Che had reminded him of the other game that they had played in Mar del Plata where Najdorf won. Guevara told him that he wanted to even the score. So according to Najdorf his score against Guevara was 2-0. She goes on to quote about her father’s relationship with Che. "My father was never a communist, but he always admired Che and the Cuban revolution".

Najdorf's lively personality made him a great favorite among chess fans, helped no doubt by his aptitude for witty sayings, taking after his mentor Tartakower. An example: commenting on his opponent at the 1970 USSR-vs-World match, he remarked, 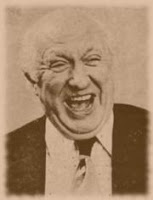 Najdorf remained active in chess right to the end of his life. At age 69, he tied for second place in a very strong field at Buenos Aires 1979, with 8/13, behind winner Bent Larsen (11/13), but ahead of former World Champions Tigran Petrosian and Boris Spassky. At Buenos Aires 1988, he made a very good 8.5/15 for fourth place at age 78. The next year in the 1989 Argentine Championship, with several other GMs in the field, he tied for 4th-6th places, with 10/17. His last national championship was in 1991 at age 81, where he finished with a minus score. Najdorf was an exceptional blitz (five-minute chess) player, keeping his strength into his 80s at the quick pace. He Died on July 4, 1997 at the age of 87.
Posted by BlunderProne at 4:35 PM 2 comments: