Gawd I am FULL

Happy T-day to all you fellow chess players on this side of the Atlantic.

We had all the kids home. I even got a couple games of chess in with my Step son.

I am charging the Delorean's flux capacitor and adjusting the settings to New York 1924. I managed to score an out of print tournament book annotated by Alekhine on ebay. I am psyched.

The teaching gig is over. Chess is back on the front burner. I am going to the Harry Nelson Pillsbury memorial on Sunday November 30th. A fitting event to mark my completion of the Hastings 1895 event.

I have a CD ready to sell at the event in chess base format complete with biographies, annotations, commentary and training positions. I plan on setting up a pay pal thingy in thenear future so my online freinds can get this as well.

Lastly, I may do a blunder-presentation of the hastings series like I did with the London 1851 event. But we'll see.

For now, time to prepare for the tournament.
Posted by BlunderProne at 9:01 PM 8 comments:

Hastings 1895: The rest of the players

In order of last place to 11th ( note: the games are lightly annotated for this post, highlighting only the major theme of the game):

Winning only 2 games and two draws, last place finisher Benjamin Vergani manages to get a favorable endgame against Schlechter in his only memorable win against one of the top ten finishers. This Italian businessman is claimed to have been playing in tournaments for about 30 years prior to Hastings according the Cheshire, the author of the text I reference. Wiki, however, claims he learned the game in 1884 which makes a little more sense since he was born in 1863. In 1892, he finished in 2nd place at the Italian National Tournament in Turin. Torre was the first place finisher. But his lack of experience with other European and Russian counterparts was probably what placed him dead last in a field of strong international competitors. 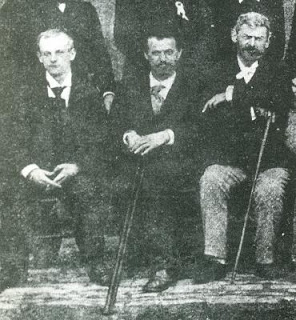 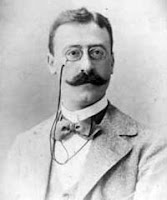 Jacque Mieses, a 30 year old natural historian and composer at the event, he was also a friend Dr. Tarrasch. It is rumored that he allowed the distracting beauties of the town to take his attention away from the tournament. Dr. Tarrash was also known for this distractibility. He beats Blackburne with a discovered attack. He draws his friend and Steinitz. He went on to organize chess tournaments over the years and in the 1930’s escaped Nazi persecution to England. According to wiki, I’ll have you know, that in 1950, at the age of 85, he became the first British grandmaster. But I can’t find a second source, so for now, Tony Miles still holds that claim.

Samuel Tinsley was 48 at the time of the tournament and is claimed to have only taken up chess seriously in his FORTIES! So there! He was one of the first Blitz players with those old clocks. He was a fun loving guy ready with a joke. His attacking style is in true form against Von Barldelben where he makes better use of his bishops.

William Pollock was an Irish–British–American chess Master, and a surgeon. He was 36 at the time of the tournament. A glimpse of his playing style shows that given a chance, he can be a fearless attacker. In the game as Black against Steinitz, he took advantage of a misstep by the elder statesman. With Tarrasch, who was also a classical player cut from the same cloth of Steinitz, Pollock managed to keep the initiative and deliver a power drive up the center .

George Marco was jokingly named “ the strongest chess player in the world” due to his muscular physique. He was reported as a fun loving jovial player like Tinsley. In one of his strongest games, he manages to trap a rook of Blackburnes . Like a lot of these players, he wrote a chess periodical for the local area.

Adolf Albin was another 40 something player at the event ( 47). He learned chess later in life ( 20) and wasn’t until he was well in his 40’s before he played in international events. He came in 2nd place in New York 1893 behind Lasker. His strength can be seen in this come from behind win against Schiffers .

Isidor Gunsberg’s claim to fame was the man behind the Automaton, a fully remote controlled chess playing machine. Unlike the Turk of the late 1700’s and early part of the 1800’s, he didn’t have to sit like a contortionist inside the machine. Rather, he was able to sit in a remote room and the machine copied his movements. He was 40 at the time of Hastings and had a modest record of accomplishments in London that spanned a decade of competitive play. Though he had good matches in earlier competitions with Bird, Steinitz, and Tchigoran, he didn’t fair as well at this event with the same competition. He did show his tenacity by winning a knight and pawn ending that looked drawn against Teichman. Against Blackburne, he took advantage of his opponent’s loss of material.

James Mason was another in his forties at the event ( 45) was declared only a recreational player by the author of the tournament book in the biography section claiming “ He lacks the strength to take the game seriously, while playing for recreation only, and is an extreme illustration of what the English players generally have been accused of- playing while the clocks are ticking and taking no heed otherwise.” In that light, his strongest win was against Tarrasch when, at move 30 for the Doctor, he thought he already made the time limit only to be told by Mason and the arbiter that his time indeed did elapse and therefore the win goes to Mason. 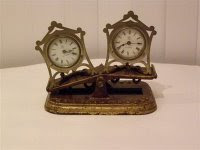 David Janowski was a frequent fixture at the Café Regence. His motto was “ While there are any pieces left there is always a chance!” He was able to beat number 2 Tchigoran in round 20 with a nice sacrifice. He was able to defeat Steinitz with a strong central attack.

Amos Burns was another 40-something ( 46) Englishman playing in this strong event. Making an early livelihood as a merchant and doing well, he took up chess as a simple pastime. He had a dry sense of humor and kept to himself pretty much. He had an overly cautious style of play ( much like his personality). He almost beat Steinitz in round 14 , but despite being down a knight, Steinitz managed to draw the game.

Carl Waldbrodt was born in Amersterdam in 1871 ( 23 at the time of the event) but was educated in Germany where he and his brother owned a stencil and pattern factory in Berlin. In round 1, he beats Teichmann in a tricky R +B+N vs 2R endgame and again shoes his endgame skills beating the other 10 ten finisher, Von Bardelben with an extra pawn. 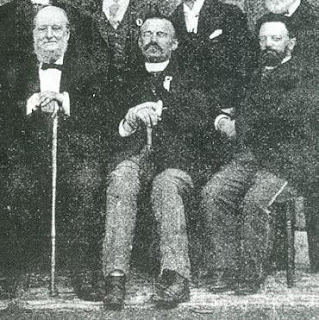 In taking the time to go through these wonderful games following my study of the London 1851 series, I can see an evolutionary trend of the style of play. In the London 1851 tournament sharp tactics ruled the games. The old timers who were exposed to that were more cautious in this tournament. Positional play seemed to debut at Hastings. True, there were some Evan’s gambits and even a King’s gambit or two represented here. The Queens Gambit declined was played as much as the Ruy Lopez. Care was taken for control of the center pawns versus the blatant contempt for central pawns of the romantic age. Pillsbury popularized the QGD with his king side attacks which later became the inspiration for hypermodern defenses. Blackburne and Tchigoran had their innovative approach to openings that added to modern theory. Steinitz’s positional teachings reinforced by Dr. Tarrasch’s dogmatic approach to classical modern play reached the amateurs of the day and formed the basis of the next generation of players to come.

Learning about the players also was a plus as it’s nice to put a story or face behind a name of a player or an opening it’s named after. These stories are easier memory tags for me than a series of alpha-numeric sequence of moves. It adds color and flavor to my study. I hope you all enjoyed this series. 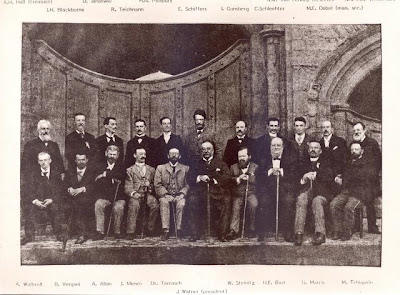 My next jaunt in the time machine is pointing to New York 1924 at the dawn of the hypermodern era. Until then, play the board and don’t forget to hit the clock.
Posted by BlunderProne at 2:27 PM 5 comments: