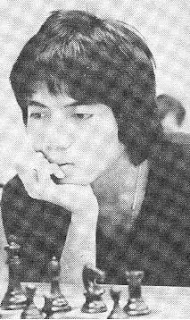 Eugenio Torre, born November 4, 1951, made him 23 at Lone Pine 1975. In 1972 he won over Anatoly Karpov in Skopje, Yugoslavia. In 1974, he became Asia’s first Grandmaster, by winning the silver medal in the World Chess Olympiad held in Nice, France. To this day, he is considered strongest Grandmaster to come of the Philippines.

At LP1975, He didn’t lose any games. Drawing all but two. I would like draw attention to the round 8 game against Venezuela’s GM Pilnik. Torre with black, essays a variant of the Pirc Defense that deploys a q-side pawn push. Pilnik responds lightly to the advance at first as the White pieces attempt to counter advance in the center. The theme “ Best Defense against an attack in the center is a counter attack on the flank” makes a good generalization of this game. Black is allowed an impenetrable pawn chain on a5-b4-c3. White’s best bet is to liquidate the minor pieces and reach an endgame with a better King position. In attempting this, white chose to weaken the king side pawns but once a forced Queen exchange ensued, the advanced pawn chain was too muck for White.

GM Torre has a rich chess career following the 1970’s. Eugene Torre shot to prominence in 1976 as a possible future title challenger after winning a strong four-man tournament in Manila ahead of world champion Anatoly Karpov – thus becoming the first player to finish ahead of Karpov in a tournament since the latter became world champion. The high-point of his career came in the early 1980s when he was ranked world No.17; successfully going on to qualify to be a candidate for the world championship after tying for first with Lajos Portisch during the 1982 Toluca Interzonal.

After losing his quarter-final candidates match to Zoltan Ribli in 1983, Torre became disillusioned with chess and more or less went into semi-retirement. He went on to become a minor celebrity due to his daily one hour TV programme “Chess Today”


He shows up in the 1990’s as one of the only confidants of the recluse Bobby Fischer and even becomes Fischer’s second in preparation for the Spassky Re-match in 1992 and also was involved in 1996 when Fischer Random was launched. One anecdote during this period has it that when Torre and Fischer boarded a taxi in Buenos Aires, the driver immediately recognized Torre as a chess player. As both were about to leave the taxi, the driver, not knowing who the other distinguished passenger was, asked Torre: “Whatever happened to that crazy guy Fischer?” 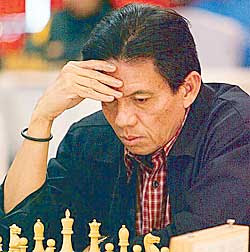 Torre has been playing in several events local since 2002 after becoming National Championship ( Philippines). He’s participated in 19 consecutive Chess Olympiads playing top board until most recently with the rise of some prominent new players like Mark Paragua and Wesley So.

A comment Mr. Torre made about the one of the stars: “It’s time for the new breed of players to take over. I’m confident Mark is up to the challenge,” said Torre.
Posted by BlunderProne at 4:40 PM 9 comments: