This was the position I reached on move 24 in a game at the club against one of the kids at the club ( EDIT 7/5/2007 Needed to take care of my minor's annonymity). It's white to move and win ( I had white) 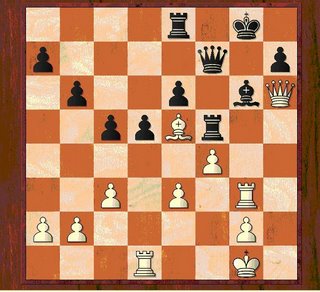 I must add that my opponent was only 13... but he was bragging to to his friends ( and my daughter) that he could beat me.

I looked at the position and saw that his queen was overworked ( his king was cramped, his bishop was pinned, his rook on f5 was stuck... lots of "seeds of tactical distruction" ) . The queen was needed to prevent me from doing Rxg6+ followed by Qh8+ and Qg7# The queen was also needed to stop the looming threat of Qg7#.

Chess Bully at large. A points a point. Huzzah!

As a result of my recent slump... I decided to do an eigth circle of doom with CT-ART. Since I completed the seven circles in May and then STOPPED, my calculation skills seemed to be waning. Starting at ground zero. I hope to reset the bad trend.

The Polgar Brick has been a supplement... but I find it not as fulfilling as the actual interaction of the CT-ART ( or similar) program.

I've been focusing too much on opening preparation this summer with dimminishing returns. As for the quest with Strategy 2.0, I can't seem to find my stride. I've done quite a few problems relating to Pawn structures ( which has the highest number of problems) but since I can't test according to level like CT-ART its hard to get into gear. I may pick up Convetika's end game CD ... later this fall.

The sword's dull, rusty and heavy... need to get back into shape.
Posted by BlunderProne at 10:29 PM 6 comments:

I found out STEVE LEARNS CHESS posted our double queen blunder game on his site here:

of course ...I was the last to blunder.

When bleary eyes deceieve thee. It was a homer moment ( "D'OH!") not a proud one for a Knight who's finsished the circles of death.
Posted by BlunderProne at 4:53 PM No comments:

So close... yet so far. Earlier in the month my rating at USCF was 1698 following the Stamford CT Northeast Open. I was 2 points away from 1700 ( a goal I have set for my self this summer) then.. I played more tournaments.

First, I went to a one day event in Marlboro on Sunday July 23rd. Four G55's had me finished with only 1.5 points. My rating dropped only a few points to 1692 ( playing in the open section has its advantages)... then the monthly tally from the club's tournament kicked me... after another non stellar performance ... I dropped to 1687... AND THEN... I played at the COntinental Open over the past weekend.

It was a 6 round event... after losing my first three games I reentered for more abuse and lost a 4th game. I won 2 games and lost the last round becuase of a blunder in teh end game... handing my won position over to the opponent. I dropped 30 more rating points with that performance.

THEN.. Last night I was playing someone 200 points lower rated than me. In a skirmish of tactics versus tactics... he offered his queen to me ... but I didn't see the offer until AFTER I moved my king... which allowed him to take MY Queen. Grant it, I had lost power the previous night and had little sleep ( Sleep apnea) and found out my wife lost her job that day. Sure I can make excuses ... but I still have friggin blind spots. These losses are going to leave scars.

I felt like my brain went on vacation and forgot to tell me. My non stellar perfromance losing 6 out of the last 8 games played seems to stem from various problems. For one thing, I found myself paired against someone I beat at a previous tournament ... my prepared opening was stale and HE had a sharper line prepared for mine! In other instances ... it was BlunderProne Strikes again. Some were lost due to pure miscalculation in a middle game tactic.

I find that after doing the seven circles I needed to revamp my openings because I kept getting tripped up over move orders and not really having a good understanding of them. Then, as I put more effort into the opening ...my calculations slip on my tactics... last night I purely lost my vision skills... argh! Its like I have only so much brain... and if I study one area the other has to leak.