Round three defeated by a 1790

I had a good run. I was up against a Trompowski. I had the potential of a minority attack with Black but had to keep my king side safe.

I made the wrong plan at this position: 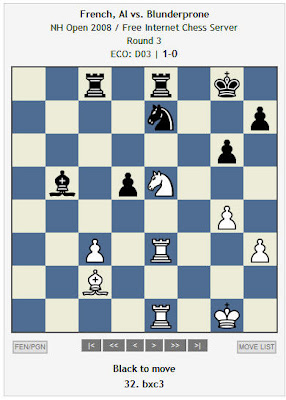 I played 32...d4 when I should have reinfroced my position. I overlooked the in between move with Bb3+. My game unraveld from there.

Oh well, I had a good run so far. Still have nothing to lose as my first two games insured me of that. If I win my next game I still have a chance at an U1750 prize. I'll post the result later tonight when I get I back.

I am blogging from the hotel hallway outside the hall. How sick is that?

Posted by BlunderProne at 1:43 PM

Zwichenzug! Your opponent is really good at spotting those. Both 33.Bb3+ and 46.Be8+ were killer.

I was planning to play at the NH Open. It would have been nice to meet you.

But then other things in life got in the way, like celebrating my daughter's graduation from HS, a farewell party for my boss who recently resigned his position, working on home repairs with an eye toward making it salable, . . .