Going into round 3 with 1.5 points

Last night I played an 1823 player as white again, I played the London. It was a symmetrical position which alloed me to play c4 and Qb3.

The game is here.

The position I botched is here: 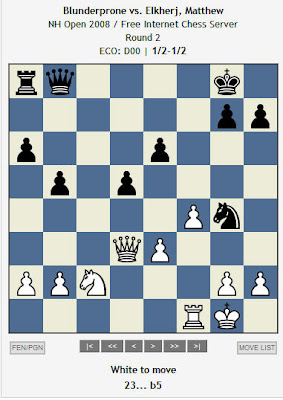 After move 23...b5, I played 24.e4 thinking I could go after the center pawns. I thought I had an advantage thinking his pawns were weaker as Islands. Instead it exposed my king. A couple moves later, I offered a draw which he excepted before I fell further down the hole.

Going into round three and four with 1.5 points against hihger rated opponents means i have nothing to lose as far as rating points go.

Posted by BlunderProne at 7:21 AM

My first instinct was to attack Black's center and open the f-file for the rook with 24. f5. D'oh! What you played was much better. :)

You're making me pine to do some sort of weekend tournament soon. That first game was very aesthetic, almost like a textbook.

Oh, and great job on your performance so far. Just keep asking yourself: WWMD?