First, Happy New Year and best wishes for all my readers in 2009. 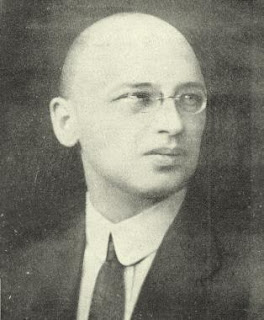 Savielly Tartakower was born on February 22, 1887 in Russia by Austrian parents. How he came to represent France for the New York 1924 event requires a little explanation as he changes citizenship four times in his life. Though his parents were Jewish, he was christened at birth, his parents having adopted Christianity some time earlier. Jews in czarist Russia took that protective step to avoid persecution, but it failed to save Tartakower’s parents, who were murdered in a pogrom in Rostov-on-Don in 1911.

but discovered the crippling addictive powers of chess and started attending chess meetings in various cafés for chess players in Vienna. During World War I, he was recruited by the Austo-Hungary army. After the war, he setttled in Paris. Thus he represents France in New York 1924. Eventually, he accepts citizenship to Poland after they gain their independence.in 1918 and became one of the most prominent honorary ambassadors of Poland abroad.

More on the migration of Dr. Tartakower later, as it was in Paris, where he played most of his chess. He decided to become a chess professional and wrote for many chess related magazines. He published his most famous book, Die Hypermoderne Schachpartie in 1924 and to this day, I wish an english translated version were available on ebay.

The first few rounds at New York 1924 were very strong for Tartakower. He was in first place by round 4 and held on until round 6. Against Bogoljubow in round 1, he plays a Kings gambit with his own variation ( 3.Be2) meant to address Black’s desire to hold on to the pawn. Tartakower enters an IQP game comfortably but allowed him a nice kingside attack giving him the edge in a Rook and pawn endgame.

He draws against Frank Marshall in round 2 despite being down 2 pawns. He exposes Frank’s overworked queen and puts on the pressure to save the game.

In round three he soundly beats Mr. Yates starting with a Bishop sacrifice against an overworked rook in this position. The nuances in this game are quite complex and Alekhine points out where I was over looking. In the game notes, I tried to included these variations as much as possible.

At one point, during an off day, Dr. Tartakower visited the Bronx’s Zoo’s Monkey house.

Aparently, Tartakower walked by the cage where an orangutan was housed. The orangutan, named Susan, moved closer to Tartakower when Tartakower got closer to the cage. Tartakower, in jest, asked the orangutan what opening should he play in the next round, and showed the orangutan a chess set. The orangutan suggested somehow to Tartakower to play 1.b4. Since the climbing movement of the pawn to b4 and then to b5 reminded Tartakower of the climbing movement of the orangutan, he called it the Orangutan, and the name stuck. Thus the original Oragutan opening had its startling debut in international competition in round 4 against an unsuspecting Maroczy. Alekhine comments “ an odd move, the chief drawback of which is the fact that White discloses his intentions before knowing those of his opponent. “ I don’t know, I think it shows some insight to his witty sense of humor. He drew this game.

He continues his undefeated momentum in round 5 drawing against Dr. Lasker in a very conservatively played game playing a Paulsen variation of a Sicilian defense. A rapid liquidation leaves both sides in a neutralized Bishop verus Knight endgame with no hope to break through.


His loss in round 6 agaisnt Capablanca will be covered later but breaks the momentum. He almost beats Alekhine in round 9 as he has a very strong attack. Alekhine had to get resourceful and found a perpetual check opportunity to salvage a draw. 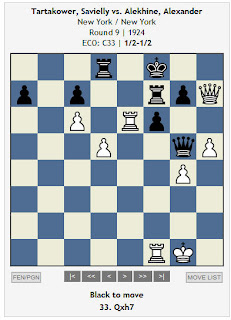 He picks up two more wins as white against Frank Marshall in round 14, and his other France compatriot, Dawid Janoski in round 16. Overall, he finishes in 8th place with 4 wins, 8 draws and 8 losses.

His strongest events were yet to come as he finished in first place at Hastings in 1927 and 1928. He continued to finish in the top tier of other events through 1930. He represented Poland in 9 chess olympiads through the 1930’s. When WWII broke out he joined forces with the Allies and later ended up in Beunos Aries, Aregentina. He returned to Europe after the war and eventually gained citizenship in France. He represented France at the 1950 Chess Olympiad. FIDE instituted the title of International Grandmaster in 1950. He won the French Championship in 1953. He died February 4, 1956. 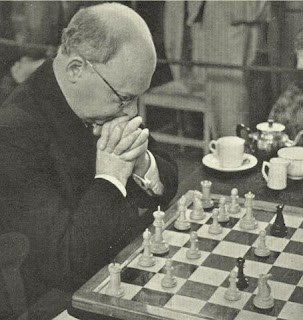 Posted by BlunderProne at 3:54 PM

Thanks again for a wonderfull piece of chess history.

I didn't know Tartakower was such a globetrotter.

Quite interesting.....Tartakower was an astounding man. On an unrelated note, Blunderpron I would like to say how wonderful you article in Chess Horizons was.

Someone actually reads that magazine's articles?

I didn't realize Tartakower was such a bad-ass. It's amazing how many great players' stories are interrupted because they were Jewish and persecuted by various nutball governments. I wish at least one of those stories ended, and he single-handedly ended WWII by taking out Hitler with a sniper rifle in an attack inspired by his pet opening.

I finally figured out how to open the Pillsbury CD. It's pretty great! Now I have a thirst for other(?) CDs you may have put together???!!!

Email me back a horseyman5000@aol.com.

Regarding 9...c5 in Tartakower-Maroczy, you wrote "What if he didn't take". I was going to say that's obvious--10...c4 and Black has the advantage. But your 10.c4 line is interesting. Did you figure it out yet?

@LF: Alekhine saw the line 9...c5 10 bxc6 etc as the stronger line to play. I asked myself ( in the notes) about not taking the pawn. The parenthetic variation with 10.c4 is what I came up with.

I haven't fully played it out. Later I sick the engines on these lines. Where Black gets an extra pawn on the queenside, White has a pawn majority in the center, with better placed bishops. The e6 pawn is blocking the activity of Black's d7 bishop in that line.