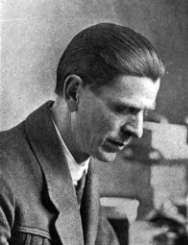 Born in Sveged, Hungary on March 3, 1870, would have made him 54 for this New york event. But this also made him at the prime age for Hastings 1895. Indeed, he played at Hastings and won the minor tournament which was equivalent to winning today’s under 2200 section. At the turn of the last century, he had several successful events between 1902-1908. In 1906, he was to play a match against Emanuel Lasker for a World Championship but political problems in Cuba ( the venue where this was to be played) caused the match to be canceled.

Geza Maroczy was semi-retired from playing in 1908 and returned as a clerk and auditor at the Center of Trade Unions and Social Insurance. At one point, he was the chief auditor at Educational Ministry but that was short lived after the Communist government was overthrown. He had a hard time finding a job and made a return to chess after WW I.

At New York 1924 he came in 6th place with a strong defensive style of play and demonstrating his Queen ending skills. None of the games had his signature “Maroczy Bind” against the Sicilian. I had a hard time sitting still through his games as attacking players seem to make more interesting games. At first his style didn’t make much sense. That’s not to say that Maroczy’s games in NY1924 aren’t’ interesting. Rather, the strong subtle nature of his play can be appreciated. It took me a little while with the first game to wrap my brain around the style of play. But once I did, I grew an appreciation for this style of play.

In reviewing Geza Maroczy’s games, I learned that defensive play doesn’t necessarily mean passive play. In round 6 against an attacking player like Frank Marshall for instance, has White playing a reverse Ruy Lopez style and simplified the position before harsh attacks could surface. The exchange to simplify almost seemed to be a fault though as the game looked drawish after this exchange on move 15. 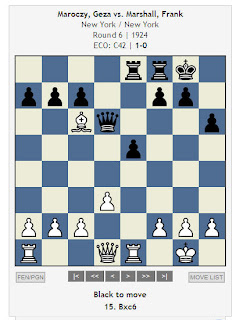 But as the game continues, Maroczy focused on opening up the e-file while Black made action on the King side with his pieces. The defense holds out for White and now he has a pawn majority on the queen side. The sharp play with the queen ending is another subtle strength of this player as he out maneuvers Marshall in the endgame.

In round 9 with the Black pieces against Yates, he allows a structural weakness of pawn islands in the middle game only to be well defended and use as an advantage in the endgame with Queens and Knights. Hitting on White’s defenseless pawns, he creates an endgame that looks like a classic “space invader” situation with 3 passed pawns raining down on Yates.

In round 21, he cramps Bogoljubow’s position with a pawn on e4, again well defended. At one point he offers three pawns for the taking with a crushing forcing sequence of moves that nets a rook. ( Which pawn to take or none? Move 23 for white) 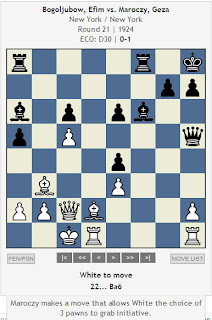 He Draws in a lost position against Alekhine in round 14 after inheriting an IQP position. He has a hard time making the best of c-file and drops the a-pawn in order to gain control of the c-file. His strong queen counter-play drops 2 more pawns but allows a perpetual check much to the chagrin of Alekhine who claims his Alibi is the fact that at a critical moment in the game, he was too focused on the match between Capablanca and Lasker ( to be covered later) and made a hasty move.

His draw with Capablanca in round 8 where Jose Raul Capablanca plays a London System, Maroczy immediately plays to the weakness of the system and targets b2 and e4. It was Capablanca that simplifies first in this game and makes a positional misjudgment on move 14. ( 14 Bg5). Capablanca plays to a safe draw through 3 move repetition in a middle game where neither side was giving up any ground to give the other a favorable endgame.

Overall, the recipe that Maroczy seemed to be most successful was the following:
1) concede a weakness that can be defended if you gain initiative and play
2) A solid defense can cause your opponent to take too many risks
3) Control of e4 as black was a successful strategy
4) Knowing how to control the Queen in the endgame meant knowing which color complex was stronger and targeting your opponent’s weaker squares

After his win at Hasting’s 1895 amateur event, he was titled Master. It wouldn’t be until 1951 when FIDE grants Geza Maroczy with the title of Grand Master. He passed away on May 29, 1952.

Posted by BlunderProne at 2:00 PM

Did he finish 19th?
Not bad for someone 54 years old and competing in this field. I of course just knew of him from the Maroczy bind positions of the Sicilian defense. It makes sense that he was a "positional" player.

Damn you now I'm backed up again. I'm in DC right now for a couple of days so when back to work will read this proper.

So defensive play doesn't have to look ugly and boring. Good to know. Thanks Maroczy!

Pity he couldn't cuddle his GM-title longer. Sad that he died after a year of getting it. I wonder who decided who got such title in Marcozy's time since the rules about norms and such wasn't in place yet.

Two days later, I'm still trying to figure out what to do for White in the three pawns en prise position. This is excellent find.

And how awesome is it to have a badass position named after you? The Moroczy Bind! That's almost as good as the the Blunderprone Bludgeoning!

Thanks you so much for stopping by and commenting on my site.