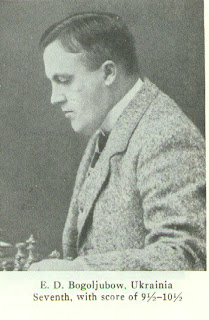 Bogoljubow is endlessly optimistic. He always hopes to find new strength for his creative endeavors deep in his rich natural talent. – Alexander Alekhine

Born in the Ukraine, on April 14,1889, he soon became known as a strong player in Russia after tying for first place in 1911 in Kiev. Since I don’t have any printed biographies on Efim Bogoljubow, I have no further insight on how he began playing chess. Little is available on the internet.

I will say that he was a strong player in the 1920’s and 1930’s showing up at most of the international events. His biggest rival being Alexander Alekhine , but more on this later. He is best known for an opening defense to the Queen’s Gambit Declined, called the Bogo-Indian Defense 1.d4 Nf6 2.c4 e6 3. Nf3 Bb4+ which arises from those wishing to avoid the Nimzo-Indian (1.d4 Nf6 2.c4 e6 3. Nc3 Bb4). To my surprise, no Bogo-Indians were harmed in the making of this tournament.

Mr. Bogoljubow demonstrates a hypermodern aptitude quite eloquently in this event being well rounded with deep calculations that keeps an eye for a favorable endgame.

In round 3 against Frank Marshall, central control of the dark squares becomes a focus in the opening stage after the dark squared bishops are exchanged off the board. Marshall wastes a few moves attempting to get his queen to control these squares that Bogoljubow already controls with a couple pawns. The concession he receives with a doubled pawn is advanced development and eventually e5. He launches a king side attack beginning with Ne5. As Black tries to defend, weakens the King’s cover. Then, Bogoljubow uses the formula of simplification to reveal the weakness and maximize his advantage.

In round 4, Reti falls prey to a similar formula. In a variation of the MacClucheon French defense, Bogoljubow plays 5.Nge2 as a means to gain control of the center. After posting the knight on e4, Reti wastes 3 moves with a Bishop to remove this piece. Ahead in development, initiative and still gets to post a knight on e4! Then, looking ahead, he sees a bishop’s of opposite colors endgame that is actually favorable to his bishop given the semi-closed pawn structure in the center simplifies with a queen trade.

Applying the same formula in Round 5 against Maroczy, he defends a Colle-Zuckertorte by controlling the center. This time his opponent didn’t waste precious opening tempo to usurp any advanced control. Rather, Maroczy begins an attack on the kingside. Bogoljubow sees through the ploy and determines deep down that if if can control the c-file with a flank attack, that he would have a better endgame once he simplifies. His plan works leaving him with an advanced passed pawn into the endgame.

With Yates in round 10, we see the formula again. In hypermodern approach to handling the Ruy Lopez, Bogoljubow allows Yates to over extend a pawn center and quickly hits back with control and weakens Yates’ Queen’s side. The pawns fall and the simplification makes for an easy win.

Against Ed Lasker in round 14, he quickly takes advantage of an opening weakness, controls the center, converts it to an advantage for the endgame.

Tartakower puts up a good fight in round 15 as both hypermodern geniuses wrestle indirectly for the center. The Stonewall pawn formation was chiseled away at the e6 point. Using the law of two weaknesses, Bogo hammers on both the e6 and the weak spots on the Queen’s side. Tartakower holds out for a while. Bogo’s only chance to break through for a win comes in a pawn sacrifice entering the endgame. 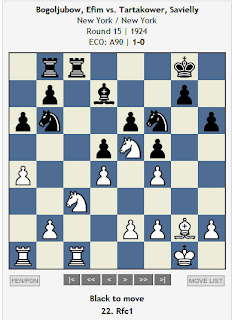 The sacrifice gives him the initiative and control of the c-file for the rook where he can muster some play and penetrate Tartakower’s defense. This was a remarkable game with solid defensive maneuvers by Black only to be broken through by clever tactics and heavy calculations!

Alekhine had trouble securing any full points from Bogoljubow. Both games were drawn. Their second encounter in round 17 had the swords of both attacking players deflecting sparks. This was a remarkable game given the fact that Bogoljubow again employs the 5.Nge2 variation of the MacCucheon French against a very savvy Hypermodern attuned to central control. Surprisingly, Bogo may have missed an opening move pawn advance that would have secured a long term goal in the endgame. Instead he plays a developing move which gave Alekhine a chance to develop a plan to secure the Bishop pair. A bloody middle game exchange leaves the imbalance of Bogo’s
two rooks and a queen to fight off Alekhine’s bishop pair, Rook and queen. As long as the Stonewall pawn formation stayed in tact, Bogo could see he had the more active pieces. Alekhine fought hard to break through but White simplified down trying for a win as well. The draw came exhaustively after 85 moves with no hopes of penetration from either side barring a three move repetition. 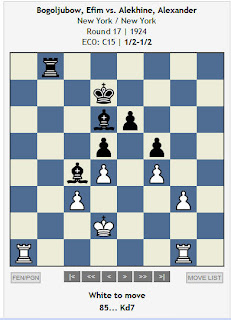 After studying Efim Bogoljubow’s games in the New York 1924 tournament, I am left with inspiration of how to turn a temporary advantage like initiative into a permanent one of material or positional for an endgame. This is exactly what Silman tries to cover in HTRYC. How to win a game is purely made simple by the demonstrations of this man’s formula of the following boiled down steps ( not to oversimplify)

Efim Bogoljubow was living in Germany at the time of New York 1924 since World War I. He went back to Russia for a couple years and twice won the Soviet Championships, Breslau 1925 and finished ahead of Dr. Emanual Lasker and Jose Raul Capablanca at the Moscow 1925 chess Tournament. In 1926 he emigrated back to Germany and beat Rubinstein in Berlin 1926. Alekhine and Bogoljubow sparred for the World Championship in 1929 and again in 1934 losing in both instances. 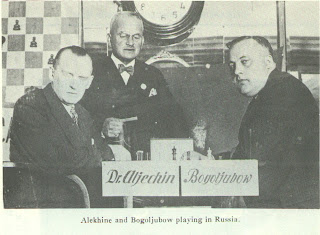 He continued to play in competitions through the 1930’s and 40’s finally drawing a min-match against his friendly adversary Alekhine in Warsaw 1943. In 1951, the World Chess Federation (FIDE) awarded him the title of International Grandmaster. One year later he died on June 18, 1952

Editor's note: Please don't razz me for some formating issue on this post. Blogspot seemed to have had a cold today and I had extreme trouble with the formatting for some reason on this post. It was randomly cutting off sentences and inserting new lines though the edit window shows no such thing. I wasn't about to retype the entire post.

Posted by BlunderProne at 2:07 PM

I thought I knew a bunch about him. My impression is that he was kind of a plodder, but you talk about a very different Bogo in this post.

Awesome. I didn't know anything about this guy and this gave a good flavor. He beat some pretty heavy competition, quite the bad-ass.

Please no more for a while, I'm now backlogged in going over these games.

BDK: No worries if you backlog, you can always buy the ChessBase CD when it comes out. ( like the Hastings 1895... through a donation)

I really dig the pictures you always have with your posts. For some reason it gives the games a little more flavor when I go over them.

Always found this guy's name a tongue breaker, or tied in a knot,
when trying to pronounce the name correcty.

Efim wasn't so famous, well atleast i havent heard much about him. So thanks for giving me more info about this guy.

Happy Birthday! Give us a shout!

I saw you there, you were blue, did you want to post something?

The thing I learned from Bogolyubov that made him so great is that he was a master at switching his attack from one side of the board to the next.

He could expand on the Q-side, then suddenly drop it, once the opponent defended over there, and then be all over the K-side. He seemed to do that consistently, funny how I can hardly manage to ever do that.

At the end, his opponent would be pinned down on kingside, queenside, and center!

Look at move 34... Tartokower is winning by a pawn, but you can see that he loses his patience for the endgame.

IMHO, Tartakower was probably often the stronger middle-game player, but you can see that Bogolyubov comes at him with the complete game.

If you want to see someone that was crazy-good next to his contemporaries, it was Rubinstein. I don't recall that he played sharp openings, though, as far as getting an advantage against the other superGMs of his era.