We interrupt our regularly scheduled posting of New York 1924 tournament analysis to bring you this blunderful report from the trenches of club tournament games.

I haven’t posted about any of my games in a while. Rather than showcase the win I had last night that was full of central control with activity on both wings that finished with a double threat on a queen and mate threat, I’d rather walk you through one of my recent losses against a person I will nick name “Count Draw-cula” to keep his identity anonymous for this demonstration. Besides the kid I beat last night was 200 points lower rated. As satisfying as it may be to play dynamic chess and create combinations that confuse the tactically challenged, I’d rather go over this loss where both players were more equally matched. 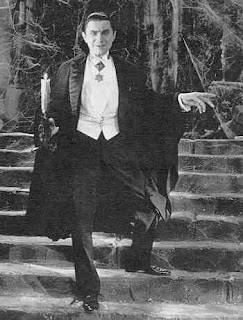 MCC January Swiss (4), This was a Queen's Indian: ( E12 as the ECO books would have it) and Rybka blasts me right away with “Unusual White 4th moves”, Whether its my games or one I am studying from the time machine, After I analyze the game I give it a “headline” and a few key points to provide a memory marker as well as grab the reader’s interest.. which is typically only me…and being easily distracted, I find this method effective in catching my attention as I multitask my way to chess improvement. ( Curse You ICC)
So the headline for this folly reads:

I out line the key points to set the mood and what to watch for:
1) White gains space on the Queen's side and Black attempts space on the King's side weakening the safety
2) An piece sacrifice was decided over a passive game.
3) The knight sacrifice was sound due to the fact that Black's King's side was weak and his queen's bishop was hemmed in.
4) When behind in pieces hold on to your material to keep the attack. 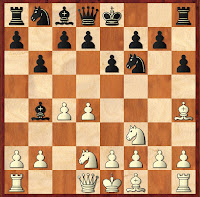 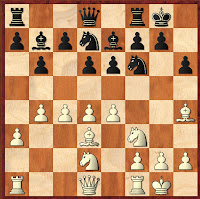 I'll consider this in future outings of this opening. I realize now that the long term prospects of holding the pin at this point is useless as will be seen later that my bishop gets displaced. Truer to Pillsbury, Focusing on e5 is more thematic. Though at Hastings, Pillsbury was faced with a bishop on e7. 6...0–0 7.a3.Be7 8.e4 Expanding in the center seemed like a good plan. [8.e3 c5=] 8...Bb7 9.Bd3 d6 10.0–0 Nbd7 11.b4
(see Diagram to right)

I was looking at advancing d5 and really didn't want him to get a knight on c5 11...e5 12.d5 Kh8 A waiting move! I had the start of a Queen's side space advantage. I felt it was time to pull in a little reinforcement. Rybka sees 12...a5 13.Qc2= as equalizing for Black. 13.Rc1 Rg8 It seemed Black was preparing a King side push to open the game. But looking at the pawn formations now, I can see where he could come up with that conclusion. I wanted to limit his knight from g5 and looked at pushing g4 next so I played:14.h3 g5 15.Bg3 Nf8 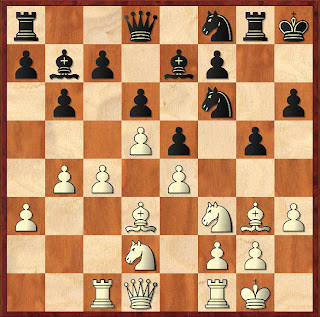 This was the position I reached when I looked at the game and decided to do a piece sacrifice with 16.Nxe5 Faced with further passive action of my King's side encampment, after 20 minutes of deep thought, I decided to take this risk and play a piece sacrifice. The adrenaline was pumping through my veins as the excitement of even considering such a move. Rybka was a lot more conservative and suggests [16.c5!?±] but I was surprised that the evaluation for Black after the recapture was equality. 16...dxe5= This lead me to believe that the sacrifice was sound. 17.Bxe5 Black wins a piece but I have two bishops on key diagonals and much more active pieces. Black’s Queen’s bishop is out of play. If this were Hockey, I would have what is called a “power play” on the King’s side. 17...Ng6 18.Bc3 Nf4 19.Bb1 Ng6 20.Qh5 White has a mate threat. Yes as Fritz points out there is a mating threat. I have strong control of the diagonals and a good attack. But I screw it up. 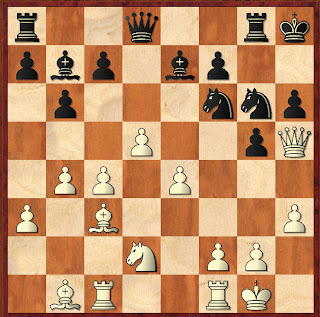 I felt it was better to take that risk and play the piece sacrifice against a strong player, over the passive position I was about to inherit. How else am I going to learn to play difficult positions like this than a true OTB experience. I learned that my instincts were dead on! I just didn’t have the right technique when I went for the simplification on move 21. Had I played 21Qf3, the game would have been just as instructional but in a way, I think I learned more from the fall. Besides, Draw-cula only suck a total of 8 rating points after everything was done. I had some previously good rounds with nothing to lose really.

Next week I continue with the American, Frank Marshall at the New York 1924 event. I hope you didn’t might this diversion. I wanted to show you how my game is doing these days as a result of this study.
Editor's Note: Corrected the use of the term exchange sacrifice to just piece sacrifice per clarification in comments.
Posted by BlunderProne at 8:44 PM

The only drawback of 6.Bh4 is that White risks falling into an old trap: 6...Bb7 7.e3?? g5! 8.Bg3 g4 and if the knight moves, 9...Ne4 wins a piece. (Ironically, in the first game where this happened, Tarrasch still managed to win as White against Bogoljubov!)
14.h3? was just asking for trouble: 14...g5! and Black would've cracked open the g-file with a later ...g4 had he not blundered with 15...Nf8, unguarding c5 and e5. Instead something like 15...h5 threatening 16...g4 or 16...h4 followed by 17...g4 looks nice for Black. You shouldn't push pawns on the side where you're weaker.
The sac was a nice idea. I wonder how Rybka suggested Black should defend - maybe 18...Bd6 intending 19...Be5. On general principles 21.Bxf6 is poor because you shouldn't trade when you're attacking.
A minor quibble: an "exchange sac" only refers to sacrificing a rook for a minor piece.
Interesting game!

Yep, 21. Bxf6 is a mistake since it releases the tension on the board. With the move you actually gave up all that you carefully build up for 20 moves.

I guess you saw your queen was attacked after 20. ... Kh7 and started to panic. Instead of searching some ways to add extra tension to black's position with the queen you only looked for a way to kill the attack on your queen.

@Aziridine: I agree with the Bh4 risks you outline. I find bringing it to f4 or exchanging is a lot better. I do tend to play e3. As for 14.h3, in hindsight it is too slow. My energy was really on teh q-side and I should have played as such. That's for correcting me on the terminology.

@CT: You are correct. I saw my queen as being vulnerable in the corner with the knights adn didn't fully think that through. Psychologically, I reacted to the position in a negative way in fear of losing the queen rather than with a clear head of putting pressure on the Black King.

But this is what happens in OTB events. We are put in situations where we have to adjust to the position. There were many lessons I was able to walk away from with this game that will make me all that much stronger in my next round.

I can't wait to hear about Frank Marshall!

After 16.Nxe5 dxe5 17.Bxe5 how did you plan to proceed? The f6-knight seems too well-protected for piling up on it to be fruitful. I think my plan would be 18.Bb2 with the threat of e4-e5-e6 when White's two bishops would be murderous on the a1-h8 and b1-h7 diagonals.

It's a shame you played Bxf6 and tossed it away... as you say, I think this is the way to learn and get better, no? Hopefully I will remember what you learned here but usually I have to suffer my own painful defeat for the lessons to sink in.

@BDK: I'm glad you like this approach. It works for me.

@LF: Instead of Bxf6, with Qf3 I was looking at pushing the e-pawn to get the Black knights moving and set up soem double attacks. But fear got hte best of me and I totally patzered the position. It left a scar, that will heal... and make me stronger!

Good piece sacrifice! I wouldn't have seen it OTB. However, it looks like 20 Qh5 was the 1st mistake, e5! or even an earlier Qf3 look stronger.

The question is why am I analyzing your games when I don't even analyze many of mine? ;)