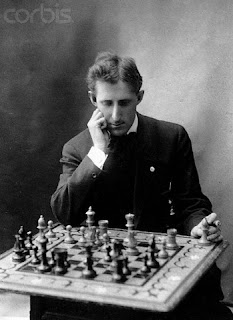 Born August 10, 1877 lived in Montreal in his formative years. He learned how to play chess at age 10 and was one of the leading players in Montreal by 1890. He didn’t make it to Hastings 1895 though he would have been 18. I think this is because he didn’t have enough international exposure despite giving William Steinitz a run for his money during an simultaneous exhibition in 1893 who remarked: “had never met an amateur of his age who had given him so much trouble,” adding also a prediction of “a brilliant future for him if he continues to play chess.”

His family moved back to New York in 1895. We really don’t see his rise until the turn of the century when he won the US championship in 1904 but never accepted the title because the defending champion, Harry Nelson Pillsbury, didn’t compete ( due to illness). In 1906 Pillsbury died and Marshall again refused the championship title until he won it in competition in 1909.

He took some thrashings from Capablanca and Dr. Lasker during this period but I think it only made him stronger. He came back strong in 1914 at St. Petersburg finishing fifth ahead of players like Nimzovitch, Janowski, and Rubenstein.

He filled a void in American Chess after Pillsbury death. He started the Marshall Chess Club in 1915.

He got a reputation as a Swindler for several come from behind wins. I always like an underdog story because it rings close to home. At New York 1924, his reputation made his stronger opponents more cautious. Take his draws against Alekhine in rounds 7 and Round 20. Alekhine comes out and admits to being cautious in round 20 and “not accepting a Grecian gift” and later giving back material after Marshall’s positional sacrifice in the game. Alekhine’s only salvage was to provide a perpetual check.

He draws Capablanca twice in rounds 10 and 16 with the former champion. Marshall demonstrates he’s an equal match in the Capablanca’s endgame especially in the game in round 10 where, despite being down a pawn in the endgame, Marshall is able to hold on for the draw.

The game I want to go into detail is the one that gave him a Brilliancy prize at the event in the round 18 Marshall versus Bogoljubow game. ( Note: AA means remarks by alexander Alekhine from the tournament book)
(89) Marshall,F - Bogoljubow,E [D52]
New York New York (18), 03.1924

Key Points:
1) The Spirit of Pillsbury is in this game
2) Bogoljubow appeared to not play well cooredinated.
3) Marshall plays a strong central attack and aggressively goes after the weakened King's side
4) Offering both his rooks, Marshall's Queen and Bishop prove deadly on the weak king.
1.d4 Nf6 2.Nf3 e6 3.Bg5 Marshall plays in the spirit of Pillsbury. 3...d5 4.e3 Nbd7 5.c4 c6 Bogoljubow plays a Slav-Meran defense. The c6 move actually prepares movement for the Queen to attack White's vulnerable b-pawn and Queen's side. 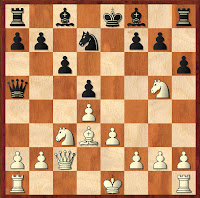 But Bogoljubow appears to want to hold on to a bishop pair.AA: Why not Bd6? 12.0–0 0–0 13.a3 Qd8 14.Rae1 This was hard to see. Why does Marshall play the Queen's rook here and not on the semi-open c-file or set up a minority attack with Rab1? He's preparing to push the f-pawn and wants rooks on both e- and f-files.

14...a5 Looks like a little preventative for the possible Minority attack. But Alekhine says " Loss of tempo, no nee 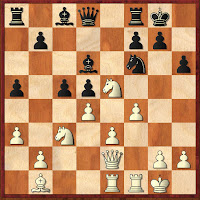 He has all the makings for a Pillsbury attack and plays this preventative move to keep the pressure on the diagonal. 18...Bd7 19.Qc2 Bc6 20.dxc5 Bxc5 21.Kh1 When the f-pawn is advanced, moving the king off the a7-g1 diagonal is wise. Alekhine sees a doubel threat of e4 adn Ng4 21...Re8 (Big diagram) 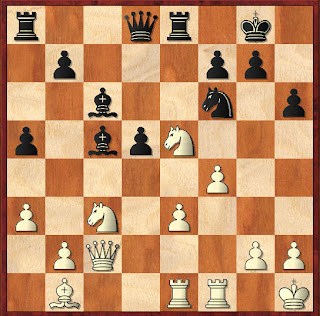 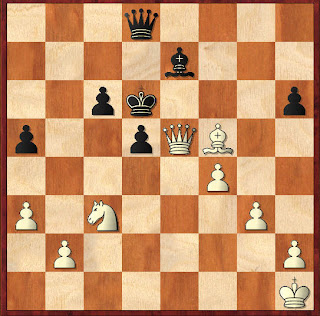 He draws Dr. Em Lasker in round 9 with a very dynamic game as he sacs a rook to create dynamics. Lasker gets resourceful and returns the material at the right moment.
In round 15, against Reti, he drops two pawns for a killer king side attack. I could go on about this attacking player who sets up these swindles but this post is already rather long.

Epilogue:
He held on to his US chess Champion title for 29 years until 1936 when he handed it over to Samuel Rechevsky. He was captain of the American chess teams at the first 5 Chess Olympiads. In his later years, he wrote a couple books ( MY fifty Years of Chess) and played bridge and Bingo.

On November 9, 1944, Marshall was returning home from Jersey City where he had gone for an evening of bingo. He collapsed while walking on Van Vorst Street and died. Three-hundred people attended his funeral at the Greenwich Presbyterian Church on November 13. His friend Napier said, “It seems to me that an epoch began with this man.”
Posted by BlunderProne at 12:45 AM

Great stuff! To hold his own like that against Capablanca in an endgame? This dude was not just a swindler!

I love this at the end:
In his later years, he wrote a couple books...and played bridge and Bingo.

Bingo? Bingo?!! Are you kidding? That is hilarious.

Never thought that Marshall was a swindler only a very decent, briliant, chess player.

I wonder if he was an example for Fischer, his playing style i mean.

@BDK: Yes, Bingo, and this is what seemed to do him in.

@CT: Another book he wrote was titled " Marshall's Chess Swindles". I was merely trying to bring that in to the discussion.

@Anon: Duh! What do you expect from a chess player? My doctor keeps reminding me of that very obvious fact you just made. I have yet to find it a hinderence to my chess playing. When I am ready, I will focus on my physical aspect of this game.

With popularity comes the delightful trolls.

Well, I guess the good news is my blog has reached this level of popularity to inherit a troll! The bad news is I will probably have to start moderating my comments to take out the garbage.

I have to say though, BDK does resemble Jared of Subway. The dude is an inspiration... lost a lot of weight but it wasn't all with sandwiches either.

Dear Anon troll, Such inflamatory remarks is only an reflection on your personal psyche. I feel sorry for you that you have to put others done in order to feel better about yourself. Learn to like yourself a little more.

If I were Marshall, I'd suffer from the "not-good-enough" syndrome...everyone knows I'm good, but also knows I'm only almost good enough to be the best. Very annoying.