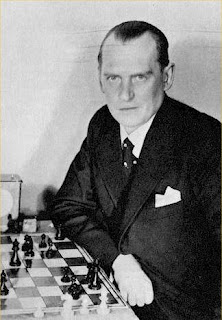 Born in Moscow on Halloween ( October 31) 1892, he learned to play chess by his mother, an older brother Alexei, and older sister Barbara. He played at Moscow’s chess club as a youngster with some positive results at age 15 tying 11th -13th in the club’s autumn tournament. His older brother finished 4th-6th place. But I think sibling challenge boosted him to come back and win the event in the spring of 1908 at the age of 16 ( some argue he was only 14 but the exact date of Alekhine’s birthday seems to be 1892).

I don’t wish to re-hash his entire biography in this post since I really want to focus on the New York 1924 event. This event took place 3 years prior to his title championship as 4th World Championship which was currently being held by Capablanca at this event. He holds up well against the World Champion in rounds 4 and 12 when he draws both rounds. I have to admit, I had a hard time finding inspiration in either of these games. Round 4 was a transposition to a French defense that I felt Capablanca missed an opportunity to pick up a pinned piece. 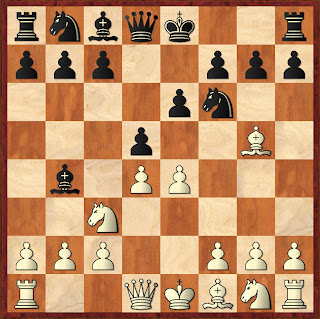 Capablanca plays 5. exd4 . I have a question to all you French Defenders: What not simply play 5.e5 where it seems like it picks up a piece? Alekhine mentions nothing in the Book and I don't see a refutation.

Round 12 was even less inspiring as this Quiet handling of the Slav defense lead to early exchanges and a bishops of opposite colors game.

In all, Alexander Alekhine had 12 draws in this event. I still have to overcome my urge to over look drawn games and value the balance in the positions and look for the inner struggles that neutralized over time. It left me felling anxious to move on. Sorry. I was hoping to see more of the attacking style of this master but instead I could not help feel that because he was commissioned to write the tournament book, perhaps his focus was too much on documenting the other events.

I do see some sparks in his rather short order wins against Yates and Janowski. In round 1, Yates ignores a natural looking bishop move in the Ruy Lopez that becomes the cornerstone of exploiting the very weakness of the position on His King’s side. In round 6 he eats up material from Janowski diffusing the power of his two bishops.

Maroczy in round 2 must have been just off that game because when Alekhine plays his signature defense, he proves how not going after his knight leaves Black with a nice attack.

Reti in round 8 was off his game as he losses a tempo allowing Alekhine too strong of a position. A weakness was created on d6 became the focus of a middle game attack that further weakened his Queenside. A King’s side pawn majority in the end game traps Reti’s rook. 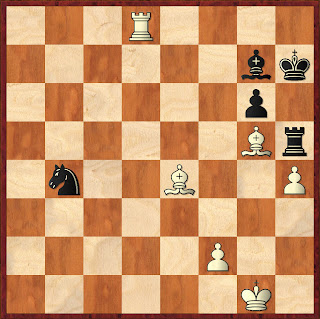 Position after Alekhine plays 42. Bg5
I already covered Reti’s revenge round which was the only other loss suffered by Alekhine aside from Dr. Emanual Lasker which I will cover in the last post of this series.

Epilogue and the Nazi controversy:

What’s a chess blog without a controversy once in a while? Ok, there has been a lot written about Alekhine’s anti-Semitic remarks during world war II. In short, there were a series of articles that appeared under Alekhine’s name in the Pariser Zeitung, a German paper published in Paris as a propaganda by the occupying forces from Germany. Among other things these articles said that Jews had a great talent for exploiting chess but showed no signs of chess artistry. He goes on to site the hypermodern theories of Aaron Nimzovitch and Reti as a “cheap bluff and shameless publicity” and that his win against Max Euwe was a “triumph agaisnt the jewish conspiracy”. 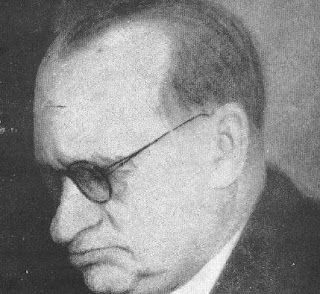 After Paris was liberated, Alekhine publicly stated that he was forced to write these in order to grant him an exit visa. He claimed to have written purely scientific artlicles evaluating the hypermodern chess movement but they were re-written by the Germans. Ken Wylde looked into the authenticity of the articles and felt there were non conclusive evidence of the authenticity of the articles. In 1958, Jacques Le Monnier claimed to have seen the first article handwritten in a notebook provided by his wife after Alekhine’s death. Ed Winter, a british chess historian makes an observation of the misspellings of the masters referenced in these articles as an indication of a possible foregery or an attempt by Alekhine to signal he was being forced to write these articles. In reading “ The Book of the New York International Chess Tournament of 1924”, there is clearly no evidence of any anit-Semiticism as he references Dr. Em. Lasker with much respect and reverence. In any case, in January 1, 2017, under current French Copy right laws, Alekhine’s notebooks will become public domain. Perhaps then, this debate will finally be settled.
Posted by BlunderProne at 4:31 PM

I don't play the French but in these sorts of positions I thought Black usually just plays 5...h6, and it looks like it works here too.

Alekhine is always describe as the best calculator of the game so it doesn't surprise me that his nickname was King of the Attack.

Aziridine shows how one plays if white plays e5.

Cool beans--I love the historical aside at the end. Interesting point about his draws. Perhaps as you suggest he was struggling so hard to make no mistakes he ended up not taking enough risks. Nice to see those games in modern dress.

"What not simply play 5.e5 where it seems like it picks up a piece?"

But you know, there have been some interesting games in the 6.exf6 hxg5 7.fxg7 line so maybe White has more options than meets the eye. :)

this series is awesome. looking forward to Capablanca, who is sort of my ultimate chess hero. keep it up and thx for sharing..

After e5 I use my super duper chess vision to look a whole 1 ply ahead and noticed h6.

All, yes its obvious the correct reply is h6 after e5. I don't encounter the french all too often and when I was looking at this ... tired and amateur like that I usually am... I didn't see the correct response and I couldn't find it anywhere in my immediate resources... though admittedly, I didn't look all that hard.

Oh well you get what what you pay for. Thanks for the lessons.

Anon sorry that your balls hurt. I didn't mean to kick that hard.

Anonymous said...
This comment has been removed by a blog administrator.
5:13 PM

I have a pet troll!

Anon's mission in life is to feel big by taking pot shots at a my amateur chess blog. How sad is that?

-sigh- I've now had to enable comment moderation. sorry for the inconvenience. You can thank the Dick heads like Anon.