Whisky clears my brain and improves my chessplay 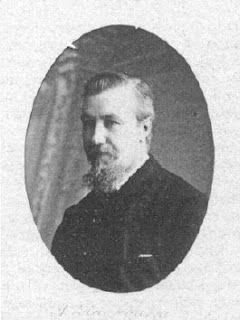 Joseph Henry Blackburne was 52 at the time of Hastings and was notorious for his drinking prowess and the preceding quote was a claim he made while interviewed for a liquor industry publication. There is even a story that part of the prize fund at Hastings 1895 was paid in advance, and for Blackburne the "currency" was a case of Scotch. Mr. Blackburne finished the case of Scotch during the first six rounds. I couldn't find a second point of reference to back this up but it might explain some of the style of play in the first few rounds.

This post covers mostly his wins that earned him his tenth place finish. I collected these games at my games cache at chess.com for rounds 1,2,5,7,10 and 11 here while the rest of the games in rounds 12,14,18,20,21 are here. In round one he almost loses to Janowsky as black but in this position finds a way to capture his far advanced passer. 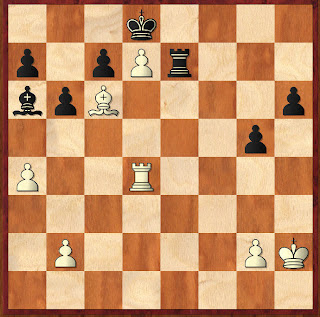 Blackburne was called "The Black Death" since he was known to fair well playing the black pieces. He was also a strong endgame tactician. The position is from round 1 after move 48.Bc6. Blackburne sees an opportunity to grab the pawn and finally make fruition of his pawn material advantage. He plays 48...Re6 49. Bf3 Rd6.

In the second round he loses to Mieses of all players. Mieses placed second to last with Blackburne being his only other win aside from Albin. It wasn't one of Blackburne's better games as the pieces themselves looked scattered and drunk. This almost supports the claim of the drunken master made earlier.

In several games to the lesser known players Balckburne, plays unorthodox openings! He seemed to be versatile in that sense and was always willing to mix things up. Against Schlechter in round 5 for instance he plays 1.d3! ( ends in a boring draw) and in round 7 against Albin, plays 1.e4 e5 2.Be2! which leads to a 122 move endgame battle where he carefully avoids threefold repetition by choreographing his rooks to swap places so as NOT to fall into threefold. Albin, finally cracks and messes up at move 87 and allows Blackburne to tighten the noose.

He wins against Amos Burn in round 10 with a move order variation of the French as white. 1.e4 e6 2.Nc3 d5 3. d4 ... truly showcasing his flare for style and ability to transpose into games he's comfortable with.

In round 11 as white against Von Bardeleben and Round 12 as Black against Teichmann, back to back rounds he seems to deliver back to back rook sacs in seemingly similar positions with colors reversed: 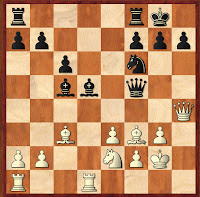 24, Rxd5! (Here on the left) and 48...Rxe4! on the right. In both cases he had material pawn advantages and without his opponent's bishop pair, he had a favorable endgame.

His wins against Vergani ( last place finisher) and Pollock in rounds 14 and 18 are not that spectacular. Against Vergani, the "Black death" plays a gambit and jumps ahead right away. With Pollock he plays the Philador's defense and wins a Knight versus Bishop endgame.

The Lasker game is the one to watch. Blackburne offers his knight on h2 which rips opens this young master's ( and third place finisher) king side. 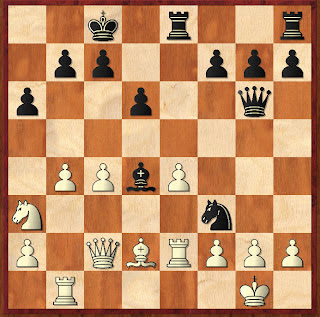 20 ...Nxh2!
In the last round as white against Tinsley, he plays against the French with a rapid fire deployment of his pieces that allowed him a central break for the final point.
Joseph Henry Blackburne was inspired by Paul Morphy after playing in a blindfold simul against the late prodigy. A couple years later, he was performing his own blindfold exhibitions demonstrating his great memory agility. His peak performance was in mid to late 18880's where he place in first, second or third place in most events he participated in. At Hastings 1895, he was still a strong player but a little past his prime. I think, had he not taken the risks of playing the odd openings against his contemporaries, he might have scored better. Against his known stronger opponents, he demonstrated a more conservative approach.

He died in 1924 at the age of 82 and played chess almost to the end. It is estimated that Blackburne played 100,000 games in his career, more than any other professional chess-player. 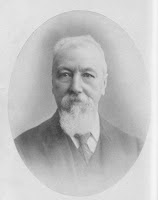 Posted by BlunderProne at 5:19 PM

I'm at work so I couldn't read the whole article yet, but good job on what I did get to read! Playing chess while finishing a case of Scotch?? Unreal! I've tried to play chess in an altered state of mind once (against a computer) and I truly sucked.

Moves like his amazing Knight sac on h2 still seem so unnatural to me! As a novice I'm so stuck in a materialistic mindset. I can't wait to go over that game in particular!

Thanks for all your hard work bringing us these posts!

Of course, you had to know Blackburne-Albin would be the one I chose to play through after you got me all worked up about a well-played rook ending!

I think you mean queenside.

It was really nice how Blackburne kept up the pressure for so long and then chose the right moment to strike. However, his victory is marred by 89.Bxe5??. I guess such things happen in such long games.

@RT_solo: Yeah... altered state chess playing... Had my run with OTB back in the 80's when I attempted a couple "M" rated events ( Think five finger leafy thingies). I wondered why my rating was so low back then. Never quite found hte clarity that Blackburne stated.

@LF: Chesire commented at the begining of the chapter for round 7 that after many sittings and 14 hours of play this 123 move battle was one of endurance. They were also bumping up against time controls every 15 moves and at Move 90 ( Time control) Albin misses the mate by moving the wrong rook. Oh and yes, I meant queenside... lots of commentary... sorry for some inaccruacies... but my services are offered for a non existing fee. :)

Hehe. It is spectacular commentary for the price. In fact, if you wrote a book filled with commentary like this I bet you would be able to sell quite a few copies!

Ahh, so time control was at move 90, now that oversight makes even more sense. And it's not like modern super-GMs don't make similar errors in extended endgames. :)

wonderful. in art history, what is it called, the Quatrochento? but here, in 2008, we now have BlunderChentro!

just added to my dk-base. thanks, dk

One other anecdote of Blackburne's drinking and chess playing. He was good at giving simultaneous blindfold exhinitions and made a pretty good living doing this. During a simultaneous exhibition at Cambridge University, the students thought they would gain an advantage by placing 2 bottles of whisky near the boards. ( I could see this happening in today's culture on American campuses) Blackburne won all his games very quickly and finished off both bottles of whisky before the exhibition was over.

Once again friend excellent work on this stuff. Truly magnificent, your passion really shows through on theses posts.

Blackburne should have gone with rum. Get a little Captain in him.

(There's gotta be a chess-related Captain Morgan ad in there somewhere...)