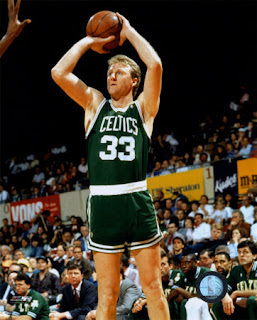 It is rumored at Bill Wall's website on famous people who play chess, that Larry Bird was a chess player. Further rumored at the Boston Globe, Larry's favorite opening was , of course, the Bird.

Henry Bird played this opening 4 times at the Hastings 1895 event and score +1 =2 -1. Which Isn't all that bad considering it's an opening designed to gain some control of the center but doesn't help the development at all. Henry Bird also played the Dutch a couple times as Black as seen last post and did rather well. It goes without saying that Mr. Bird liked the pawn structure and seemed to favor the king side attacking potential that arose from such positions.

The games for rounds 11-15 are here while the remaining 16-21 rounds are here as a reference to the rest of this post. He entered round 11 with 7 points and in the second half of the tournament only managed to gain 2 more points. His play is odd. He favors moves like Kf8 over castling in Round 11 against Mason, round 17 against Tarrasch ( where he really strays and plays an odd looking closed Sicilian where he was typically playing French Defenses) and in Round 20 against Gubsberg whom he finally won a game with this order of play. He wasn't completely off his rocker, he just chose to have this setup and open the h-file for the rook in his games. His younger opponents just seemed to know how to attack the uncastled King and rip open the center before Bird went "bowling" with the h-pawn.

He was an old dog not with too many new tricks in the second half of his games. He had a 115 move draw against Janowsky in Round 16 where in Move 87 he could have won as seen here: 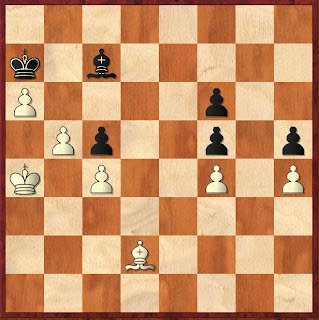 Bird has white and had he advanced the b-pawn followed by Kb5 he would have had a won position. Instead, they were under time pressure and a rapid fire dance of the bishops followed when a position was reached for the third time a draw was called.

Pillsbury, who was the hero in the event had a most fascinating approach to Bird's lethal Evan's Gambit. He took on the challenge of f7: 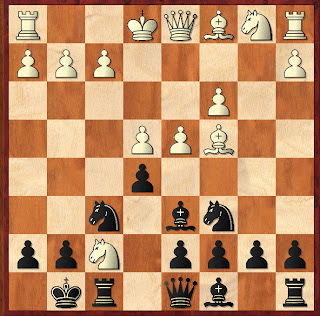 Schiffer's comments on the game that the Pillsbury's handling of the gambit with Bd6 is taken from the days of Anderssen, Mayet and Keiseritzky. Which means, Pillsbury was well read on the masters of his time in preparation to this event. If there is one game to watch, its round 14 Bird vs Pillsbury.

Overall, it seemed Mr. Bird was passed his prime indeed as it showed up in his end game play and the fact that he seemed to be a predictable attacker that the new blood could adapt to. I still admire his play given his age and he still had a couple jabs at the young folks. His love for the game made this accountant a good contender none the less despite his 15th place finish in this event.

Next up will be Blackburne as I will cover the top 10 finishers in this event. The "Black death" finished 10th but was colorful in the spirit of his partying. Perhaps Blackburne is to Chessloser as Keiseritzky was to Blunderprone? Stay tuned ( if this doesn't bore you)

Posted by BlunderProne at 4:51 PM

I put the Bird-Janowsky position from this post into Shredder and it came up with the following:

Did you see a shorter way to get a pawn promoted? Just curious. Good work as always.

That is awesome!! That is hilarious about Larry Bird.

Dude I have my lunch hour fun cut out for me now. You do a wonderful job with these. You should be a chess coach!

The internet is great, as I don't think you could recreate the fun or usefulness of these games in book form. You could publish a series of tournaments and sell it in a DVD.

I'll have some specifics as the next couple of weeks roll on and I peruse these properly.

Tommy, thanks for Shredding. I couldn't find a shorter path to Queening. I might have challenged the opposing Bishop with 3. Ba5 to gain control of that diagonal.

BDK! I've actually coached Scholastics players in the past. I also coach beginners through our church. A local GM Igor Foygal has approached me to help him with some scholastic players. It's a time constraint though and I can't devote too much time on this at the moment.

I have been given lots of support in this series. I am doign this mainly for my benefit and curiousity adding my own twisted flare and commentary. I decided to go "blog" on this series as I felt others might find it beneficial or at least entertaining as well. Learning about the personalities behind the names takes chess to a whole new level of appreciation for me for some reason. I am finding that there are some out there who are not too different than myself or others I've met along the way.

Blunderprone: sorry for the slow reply regarding our tournament game. I just left a comment on LEP's blog too - I was on vacation last week and forgot to give you a heads-up. How is either Wednesday or Thursday 7 PM PST / 10 PM EST for you?

Did you see all these pictures?

Blunder Prone, thanks for your awesome comment on "The Brain and Chess", and your cool historical shorts, they're fun to read!
I wanted to let you know I got my first two wins on FICS today and posted them, they're really short but I'd love any feedback. Thanks again!

I was curious how you are going about analyzing these games. Are you using a computer? Doing it yourself?

I had a lesson with my chess coach today who chided me on how I have been annotating my own games. He wants me to use MUCH LESS computer analysis and also wants me to use the same process for analyzing master games.

Have a good one,

The method I use is two fold. First, I attempt my own analysis with a "raw" game. Then I cross it with the book I have " Hasitings 1895 centenial edition" since this entire tournament was annotated by all the players. I will run Fritz on occasion for good measure espeically if i see a line I think is worth persuing.

For the London 1851 series, I did a similar thing and used Staunton's tournament book and annotations as a guide ONLY AFTER I struggled through the variation.

I also looked up the history and origin of certain openings used via wiki as a reference.

I agree with your coach. I advocate that you are better off attempting to annotate raw games since its the same process. As I have done a few hundred games now, I find my first pass is I set the game in motion to get a first feel of how the action goes. The I take it one move at a time. If its an opening I don't know, I dig deeper and take a stab at understanding it. Middle game ideas seem to come about from various sources ( silman, Nimzovitch, Lev Albert) as my memory tries to metaboloze these ideas from various books. I find master game studies like this is a wonderful way to see how well I recall these concepts.

Thanks for the advice! I think am going to start with a couple of Morphy games, since they aren't too murky. And I am going to try and use the same process when I analyze my own games.

Dude, awesome job on these.

Despite being still in my 20's, it's heartening to hear about the old guy who can still mix it up with the whippersnappers.

I have recently begun a chess blog devoted to the Sicilian Defense and looking for some people to trade links with. Would you be interested in linking to each other. You can check out my site athttp://www.thesiciliandefense.com

If you are interested I will add you to the blogroll on my homepage.