AND my cat pissed on my Chess gear

(we interrupt our regularly scheduled Hastings 1895 documentary for this rant) 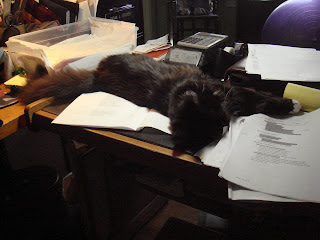 My how the mighty have fallen. My goal to exceed the 1700 threshold was reached at the world open when I peaked to 1737. My goal to sustain the 1700's for more than a month was shattered this month at the club with a four game losing streak.
The good news is that almost everyone I played was higher rated except for the kid tonight. In all my games I reached a comfortable position out of the opening. One game I lost because I didn't see a stronger, more forcing move in an even position. Had I done that, I would have had a chance to win. Another I dropped a pawn in the middle game but blew my drawn R+P end game because I failed to exchange rooks ( forced) at the wrong time. Another, I managed to get a strong attack in the center...but failed to take into account King safety.
Tonight, after I meticulously reviewed my previous gaffs and challenged myself on not making the same mistakes with the previous games registered in my data base, I still messed up a perfectly good game. I had the opening won, noted with advanced development and complete control of the center. My opponent got greedy with a b-pawn grab with the queen while I used my bishops like boa AFTER getting my king to safety mind you ( I learned that). BUT I failed to underestimate my opponent's counter play as I tightened the noose on his queen. The exchange netted him 2 pieces and a rook for a queen... I totally misplayed it and after the dust settled he was developed and suckered a bishop off me.

Next month, as planned, I will still play up in the top section. Back when I was stuck in the lower mid section, I found it hard to advance because of the kids. Now that I am in the upper mid section, I am running into the same issues. I gained ground when I first did the leap of faith. Playing stronger opponent's has its merits if you don't mind losing. I'm used to it... it sucks but I try to look at it philosophically and the big picture perspective.
My game is improving, just not as good as the kids. It's tough keep up with those rascals. Some tournaments you're on a roll...others, well... sometimes the cat just pisses all over your stuff. 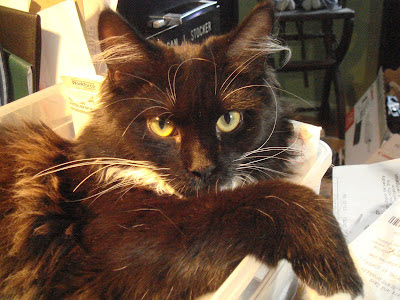 Posted by BlunderProne at 9:29 PM

Yikes! But You're doing the right things study wise and you're still 100 elo over where you were a year ago. So this is more like the scene in the Karate Kid where Daniel-san gets beaten up before winning the championship than a tragic ending. ;)

You know those lolcats? This would be awesome. "I r pissing al ovah ur ches gere."

Hey, at least your rating is up there. I don't play nearly enough rated OTB to make any dents in my USCF rating... not that it really matters.

Mischievous, Yes! Afterall is she is MY cat.

The opposite is happening here. I gain ground in local events only to shed them in big ones.

I can relate to the rating thing. It seems like every time I gain a bunch of points, and then piss them away at the next tournament. Some how I can't string 3-4 good results in a row. I try not to worry about it, otherwise I make myself nuts.

PS Sorry I forgot about trying to play you before I left for Canada. Pretty forgetful on my part, eh? Actually in this part of Canada they would just say "elle est tres stupide".

Hi
Nice blog the main thing is your chess is improving. We have the same problem here in England you find yourself sitting across the board looking at a pumped and primed spotty faced kid.
His grading says lower but you know hes going to smash you up.
They seem to play about 50 grading points above their grading.
Let us know in postings how the cat is!!!

Thanks for all the support. ChessX, welcome and the cat still lives her evil life.

Soon to post on Schlecter, the draw master at Hastings 1895. stay tuned.

Schlecter was he the one who drew a world championship with lasker, by losing the last game when he was 1 up.
I think he had to win by 2 points out of the 10 games.
So people think schlecter just lost his head under pressure in the last game when a draw would of been enough.
But nobody knew of the 2 point rule at the time.

LMAO@the cat...I had to call the wife in to read this post's title and see the pictures.