( we return to our regularly scheduled program... the cat still lives) 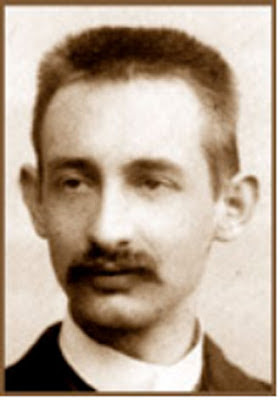 Carl Schechter, was only 21 at the time of Hastings. He only learned chess 5 years prior to this event and only became serious at playing in competitions three years prior to this event. He finishes in ninth place after a phenomenal record of 12 draws and 5 wins. He beats Pillsbury in round 18 as he was virtually undefeated with the exception to one loss up to that point! However, his formula was rather dull.

I collected some of the twelve draws here. There are a couple of Petroffs that rapidly dissolve into draws after early queen exchanges. I already covered his draws with Bird and Blackburne . His play against the stronger players seemed to be formula driven with develop then rapidly exchange major pieces.

The exception is his draw against Steinitz. Steinitz offers a Bishop to prevent Schlecter from castling, an interesting maneuver by the older master. Then he misplays the middle game and creates an opportunity for a Rook and Queen Skewer by Schlechter. He fights back, down in material, with a mobile pawn force in a last ditch effort and pulls a dubious combination: 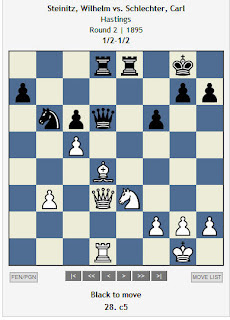 Play 28.c5 ?!, Calmly, Schlechter responds with 28...Qe6 29. cxb6 then 29...c5! The game still ends in a draw as the younger Autrian appears the weaker player in the end game and can't quite seal the deal. Steinitz wipes the beads of sweat off his forehead after a threefold repetitive dance. This is the game to watch I think.

I've had to overcome my personal avoidance of watching over drawn games. Psychologically I want to see how an player CRUSHES his opponent. But the thing that draws teach us is that exact play can show how to play against strong lines in openings. That was not entirely the case here in reviewing Schlechter's games, he was a formula man that seemed to deliberately play for a draw and on occasion win a good game.

About his five wins, against Burns in round 12, he hits upon a classic CT-ART geographical level 10 Motif ( odd how I refer to a modern piece of software as classic in reference to a game that was played over 110 years ago) : 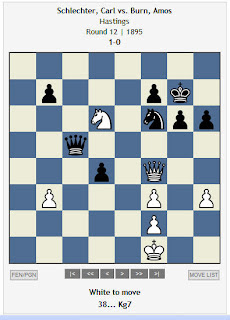 With Tinsley in round 14, he simply has the more active rooks in the endgame. He Beats Schiffers with two "hungry pigs" ( double rooks on the 7th) and against Mason in round 20, he executes an eloquent Rook, Queen and Knight mating net on the exposed king.

The commentary in the book about round 18 and the leader, Pillsbury, suggests Schlechter was a force to be feared. He ends up winning the game as Pillsbury trips up the endgame and ends up in a lost R+P ending: 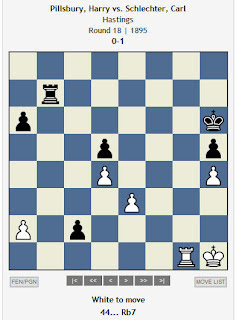 There was talk that Pillsbury's first place positioning was now in extreme jeopardy but the way the next round played out, it put him back on top. Schlechter's wins secured him a place in the top 10 and some handsome prize money of 13 pounds!

One thing is for sure, where London 1851 had mutton chops, Hastings 1895 had the extreme mustaches! 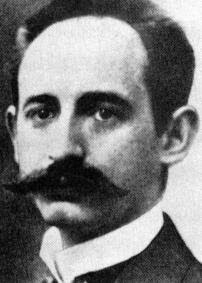 Up next: Richard Teichmann.

I hope you enjoyed this.

Posted by BlunderProne at 4:41 PM

Just in case those who are not in the know: http://en.wikipedia.org/wiki/World_Chess_Championship_1910_%28Lasker-Schlechter%29
In 1910, Schlecter was the main contender against Lasker's 16 year reign as a World Champion and almost won in the final round. After missing a win then a draw, the match ended 5 and 5 which favored the defending champion, LAsker.
There is debate on whether the 2-point ruled was necessary to defeat the former champion. More can be read at the link provided.

You know, I am the same way about going over drawn games even though I know there's stuff to be learned.

To me it seems kind of wimpy to aggresively try for a draw all the time with rapid development and exchanging of major pieces early. Shouldn't there be a fighting spirit in chess? An eagerness for battle? I still like the "whiskey guy" (Blackburne, was it?)

It took me a moment to figure out why Qxf6+ was a good move...then it hit me...setting up a family fork (royal fork?).

Take it easy man, keep up the good work!

Extreme mustaches > muttonchops. Although it would be hilarious if muttonchops made a comeback.

There's something to be said for talent and hard work.

I love these posts, especially since I am making a cursory read through of the same tournament book right now!

I just got done my first big analysis of one of my own games using the method my coach has given me. It is fun and VERY enlightening! He wants me to use the same method on master games once I have a few of my own games under my belt.

Thanks for the posts on the Hastings Tournament!

I described the analysis method my teacher recommends in response to your question as a comment on my blog for that same post. It was quite a lengthy answer and I didn't want to take up too much space here on your blog.

Now I am on to analyzing game 2 of that tournament!

Have a good one,