45 years old at Hastings 1895, the Russian, Emanuel Schiffers, scored a total of 12 points ( 9 wins, 6 draws and only 6 losses) to place 6th at the event earning him 30 pounds. This was to be his best performance in his chess career given the strength of this international event. Prior to this event, Schiffers held the title of Russian champion for 10 years before finally being defeated by his student, Mikhail Chigorin, in 1880.

Schiffers was known as "Russia's Chess Teacher". In 1889, Schiffers gave the first public lectures on chess theory in Russia, at the St Petersburg Chess Association and in other cities. He wrote the chess textbook Samouchitel shakhmatnoi igry (Chess Self Taught, published 1906).

In round one, he demonstrates how tactically sharp he can be against Gunsburg and offers knight to his opponent. The position below is with White (Schiffers) to move 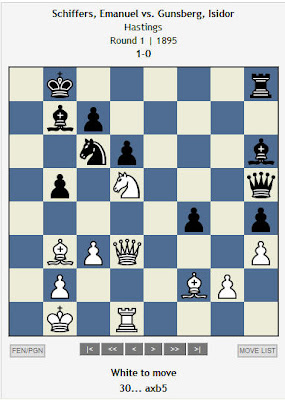 Rounds 2 and 3 are draws with Tiechmann and Burn, Round 4 is Teacher versus Student and is the game to watch. He again out plays tactically against the second place winner in the event by taking Mikhail down a very sharp line of the Scotch and by move 18 he plays Ne4! which creates a double threat on the position: 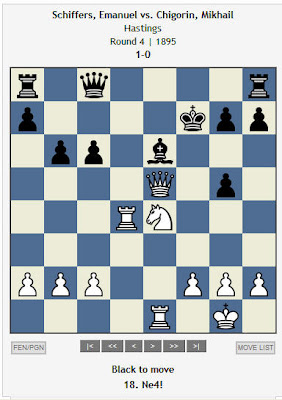 Round 6 is a draw against Meises but he takes out the Drunken Master, Blackburne in round 6 with an early adoptation of what later became known as the Rubenstein Variation of the French.
Round 9 is his next win against Tinsley ( after losing to Tarrasch and Pillsbury in rounds 7 and 8 respectively). The timid play by his opponent allowed him to dominate the opening and the game. The selected games of Schiffers first batch of wins in Rounds 1,4,6 and 9 can be found here.

In round 10, Verganni attempts a tactical shot with Nf3 but fails. 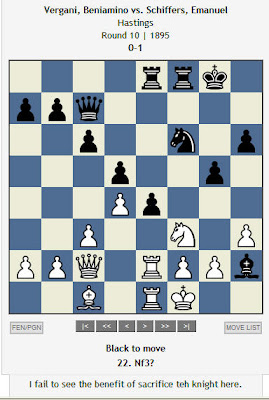 He loses to Steinitz ( he’s up next) in round 11, draws to George Marco in 12 and loses to Adolf Albion in Round 13. He comes up for air with a win against Janowsky who drops a queen early on in the game in round 14.

Against Mason he draws in round 15 and loses to Lasker and Schlechter in rounds 16 and 17. Drawing in round 18 to Von Bardeleben finishes a long stretch of matches that he doesn’t close with a full point.

Finally, in the last three rounds, agianst Bird ( already covered here), Walbrodt and Pollock, he scores 3 points. In Pollocks game, he makes use of his knowledge of pawn formations as Pollock tries to take him into an early endgame with queens off the board. The games of round 10, 14, 20 and 21 can be found here.

What struck me about Emanuel Schiffers in these games was his ability to play sharp tactical lines that were also part of the classical theme of the Steinitz/ Tarrasch era of positional play. He knew how to exploit a developmental advantage, central control and how to play to his opponent’s weaknesses in an endgame, often creating more weaknesses. This chess teacher from St. Petersburg had a great performance agaisnt the elite players of his time.

I hope you find this useful or entertaining at least.
Note: I chose NOT to play in the NE open this year after my past two years craptacular appearances here in 2006 and then again last year.
Posted by BlunderProne at 8:16 PM

Interesting story. His combinations now can be used to teach, nice stuff.

beautiful in every way.

I thought that chess was lectured more far away in the past. Didn't know Schiffers was the first to do so. Intresting fact.

Just when you thought it was safe to read superficially, Blunderprone provides more amazing game studies.

Inspired by your series, I've begun studying games by masters, games in my opening repertoires. I'm going like I usually do, slowly so I can soak in the information.

I wish I had two of me, one to work at work, the other to work at chess. The finitude of life can be depressing.

I really have enjoyed the the games from the Hastings tournament. I was not familiar with some of the chess personalities that played there (I never even heard of some of them). Good reading. Thanks for taking your time to post the games!

I actually had a half way decent NYS Championship for a change. I've written part one. Part two to follow in a day or two.

Unfortunately my hard drive crashed while I was at the tournament which really sucks because I lost a lot of pictures.