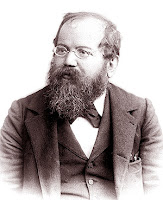 Wilhelm Steinitz was a 59 year old veteran at Hastings placing fifth in a field of 22 top contenders. Much has been written about this Austrian born chess player who later was an early Architect for the American Chess Congress that Frank Marshall later became known for.

After reviewing most of his wins, I wanted to label him either “Rumplestiltskin”, King Midas, or simply “the Alchemist” for his ability to turn crappy positions to wins or draws.
For instance, in a game against Teichman, which I mentioned previously and thanks for your patience, ( 3rd game down in this post ) , Steinitz is behind 2 pawns in this endgame and he manages to successfully force a draw against a tough tactician. 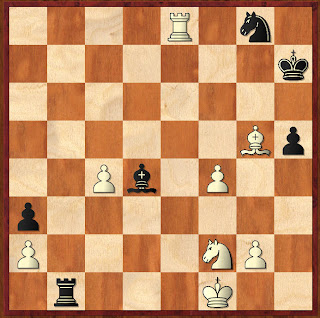 Teichman has to block with the rook in which case, Black ( Steinitz) moves Rb2.


In the game against Chigoran ( Game of the week with an Evan’s Gambit) , he has a lousy position in the middle game. We all have experienced that at some point in our chess career, I’m sure. As Black In the position here: 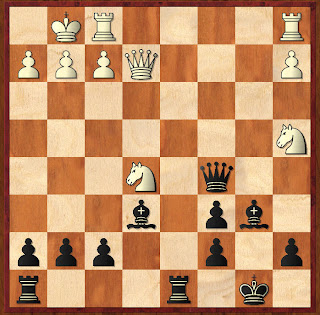 He plays 20…Qb5 and offers a Q exchange knowing that White will further reduce the forces by a series of exchanges. Ultimately this works for Steinitz, he does have a couple extra pawns for compensation of a weak and cramped queen side. Chigoran knows that the dual bishops will win over the dual Knights. After exchanging queens and a knight for a bishop, Chigoran still has a knight fork if he continues the exchange. But Wilhelm Steinitz sees through all this and places his bets on the imbalanced 2R versus R+B+2P endgame which he wins effortlessly.

Back in a day, he was labeled the first World Champion. Steinitz won every serious match he played from 1862 until 1892 inclusive, sometimes by wide margins. In the period of 1862 -1872 he played in the “Romantic” attack-at-all-costs style of play like Anderssen and Morphy.
It was after that period where he developed a more positional style which debuted in the 1873 Vienna tournament and was to become the basis of modern chess. His style of play later became the cornerstone of the turn of the last century and promted a new era several decades later known as Hypermodern. This is why I found "father of positional play" more of a fitting label in the title.

Sure enough, his games in this match were mostly positional in style, but his handling of Classic Evan’s gambits against Gunsberg had him showing his Romantic roots blended with his positional style rather nicely while keeping the game closed and held on to the pawn until his opponent cracked and dropped a piece. With Blackburne ( drunken master) trying to throw a King’s Gambit at him, he goes for rapid development and attacks at two weaknesses.

He gets the first Brilliancy prize for his game against Von Berdeleben in this CT-ART like position with a double attack and a “take my rook, please” series of moves that followed. ( Ok another game to watch posted in part 1 here ) 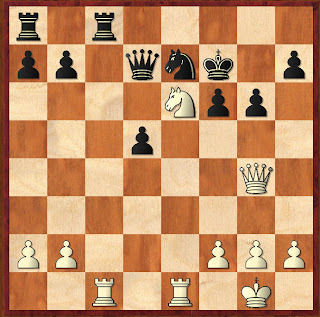 He died in 1900, in poverty. He was not one to manage his finances wisesly depite being World champion, chess writer and architect of the modern era of positional play. Rather he was a man of honor, and willing to play for a title for no fee at all because of his passion for this game. It’s truly sad that such genious ( and many in that period) ended their lives in such disposition to their status in the chess world.

At least he is post humously honored in Praque at his place of birth. 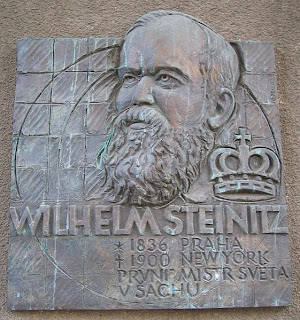 Posted by BlunderProne at 7:34 PM

wonderful. thank you very much. you bring joy and calm to the chess.blogosphere for sure. warmly, dk

Great work as always. It is interesting how a lot of the early chess players died young and/or in dire economic conditions. Not to mention the fairly high occurrence of mental illness. This is yet another factor that leads me to draw conclusions to chess and jazz. Many of the early jazz pioneers found themselves in the same sort of predicaments. Sometimes genius does have a price I guess.

Thanks again for writing these posts!

Have a good one!

You especially piqued my interest in the Chigorin-Steinitz game (Evans Gambit!) but it is not in your chess.com posts (or am I confused?).

So, I looked it up and played over it and yes, he made that endgame look easy.

It should be there but I am finding that as i post 5 games in one chess.com blog, it sometimes doesn't load.

I think I will resort back to one or two games per chess.com post since it has a hard time on the loading for some reason.

Sorry to make you have to work for that one.

I remember studying that game Steinitz-Bardeleben many years ago.
I still consider it one of the best games in the history of chess. Didn't know Steinitz was 59 year old at that time - he calculated his brilliant idea 14 moves deep with variations!

Ah, playing for honor and not for the lucre!

You have to remember that in those days the idea of being a "professional" chess player or athlete was looked down upon by aristocrats and polite society. Morphy was always quick to deny allegations that he was a "professional" player.

When the Olympics were revived in 1896, the whole idea of limiting participation to "amateur" athletes was to keep 'working class' folk out, to reserve it for 'gentlemen.'

My guess is that a professional chess player in the 19th century would have been thought of in much the same way professional gamblers and pool sharks were looked upon (until fairly recently, that is).

Steinitz - Bardeleben, wow what a combination. I wonder if Steinitz saw it from a to z when he played the first move that triggered this combination. Truly impressive.

Btw, thanks for this series. It's always nice to get information about the (old) greatest players who shaped the game of chess to what it is today.

Wassup Blunder! Just stopping by for a quick read and saying hi.

I really want to watch the movie they made out of the novel The Luzhin Defense...it stars that guy John Turturro, but blockbuster or hollywood video don't have it, so I'd have to order it from Amazon. ANYWAY, keep up the good work!

Steinitz should have grown a bigger beard, IMO.