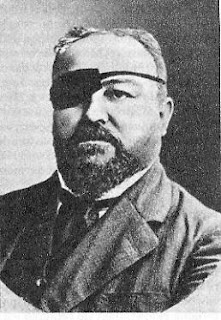 The picture on the left is what he looked like at Hastings. The other picture is what he was better known for looking like with the trademark patch over the eye. During the London 1899 he had to withdraw after 4 rounds because of eye trouble. He lost the use of his right eye due to an illness and from then on wore an eye patch. So he grew a beard and wore a patch and returned to chess in 1902. The moniker, "Richard the fifth" came about because he tended to finish in fifth place in a lot of events around the turn of the last century.
It is argued that he was born on the exact same day as Emanuel Lasker, December 24, 1868 but there are conflicting reports that it may have been December 23, 1868 as listed in his obituary in Germany. In 1890 he was a student of modern languages (becoming fluent in several of them) and studied in Berlin where he also improved his chess. He moved to England in 1892 as a language teacher and resided there for a number of years.
26 at the time of the event in Hastings he tied in 7th place with Von Bardelben. His games against Bird( win), Blackburne(loss) and Schlecter(draw) are covered in previous posts. In this post I will comment on his other victories and draws with the folks in the top 10. Rounds 2, 4, 9,10 and 15 are in part one, while rounds 16, 17, 19-21 are covered in part two .
His draw with Schiffers in round was rather dull with a rapid exchange of pieces in the style of Schlecter. In Round 4 against Vergani, he wins with a knight sac that opens up the king side. He effectively uses the rule of two weaknesses in his win with Marco in round 9. The game with Tarrasch in round 10 reached a time pressure in this position: 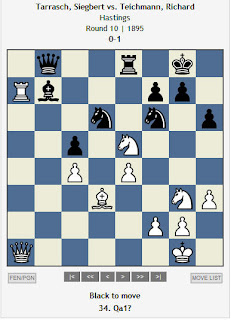 Tarrasch plays 34. Qa1 which loses a piece. He would have been better playing 34.Ra5 with a decent game. By move 42 Tarrasch exceeded his time and lost.
Steinitz, at 59 in this event, shows he still has what it takes by pulling off a draw against this young German in round 15 while being down 2 pawns in a hopeless endgame: 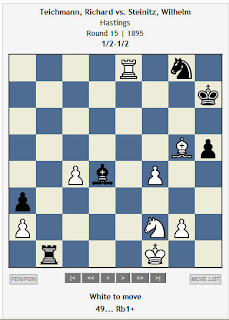 In round 16, he plays a phenomenal game with Meises while down in material. I think this is the game of the post to watch if you want to pick only one. He plays Bishop versus rook in a middle game battle with an advanced passed pawn and doesn't let up.

His win with Tinsley in 17 is achieved with all the big guns requiring both rooks, queen and bishop to mate an exposed king. In round 19, a queen sac leading up to a mate in three combination is a nice finish showcasing his tactical skills.

Isolated queen pawns were looked down upon in this era of chess. Teichmann showcases effectively how to defend with one and draws with Von Bardeleben in round 20 and the win with Tinsley( round 17) also showcases his ability to use an IQP as a middlegame weapon.

In the last round against Mason, he demonstrates his ability to maintain a solid pawn structure and more active rook in an endgame to bring home the point and close in 7th place with a prize of 14 pounds and 15 shillings.

His best tournament successes was finishing in first place at Carlsbad in 1911 defeating top players like Rubinstein, Alekhine and Nimzovitch.
Posted by BlunderProne at 3:48 PM

Good post, I like the "Patch guy". Does your Hastings book come with all these cool pictures and facts about the players? Now I want to get a tournament book too!

do you look like them, or do they look like you? ZZ Top goes to GM chess? these were high brain dudes!

@RT_solo: The tournament book, Hastings 1895 centential edition, is a great book with details about the tournament and brief bio on each player. Embedded in the chapters is Cheshire's ( original author) commentary on each round. It gives insight to the time scrambles and even the social event the participants agreed to attend.

Not many pictures though. for that, I let google be my co-pilot. wikipedia has a lot of info as well as batgirl ( chess.com/batgirl), mark weeks and others out there on the chess history bandwagon. I go fishing for info, collect here to try to bring one closer to the event. It's a feature I've added to my time machine ;)

@transformation: I look more like Steinitz as i reported back in 2006 here : http://blunderprone.blogspot.com/2006/03/i-took-test-steinitz.html

Frank, Billy and Dusty... seen them live ( I won't say when)... nice beards... but I think there's a threshold when they get that long it becomes a distraction when you can't see your own king.

Great posts informative as ever.

Great stuff. I love the Mieses game, what an exciting finish!

Have you started analyzing the games of Pillsbury or Tchigorin from Hastings, 1895 yet? I just got done going over the games of those two players from the same tournament. I am not analyzing them yet. I am still honing my analysis process on my own games first. But I am getting ready to try it out on a Capablanca game.

Have a good weekend!

Hi! can we xlink with my chess blog which features daily chess updates and news? just let me know and i'll add you..thank you.

Fine wrote in 1942, "Thirty years ago, Teichmann said that chess is 99% tactics. And despite the enormous strides of chess theory since then, his percentage can only be reduced a few points."

That is such a good quote! Hence my discontinued study of strategy and sole focus on tactics!

@tommy G: I am saving Chigoran and Pillsbury for last. What I ma doing is the top 10 count down ( plus Bird who was my corss over). Hang in there. I will get to them soon.

@Chess Addict: I added you to my growing list of friends

@LF: Thanks for the Teichmann quote!

@RT, Chess X, and Chessaholic, Glad you are amused and enjoy this series.