...and now, we return to our regularly scheduled program. 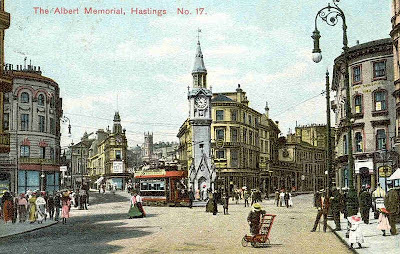 I've had the flux capacitor fully charged while I was in Philly and I set the time machine to the period of August 5 - September 2 of 1895 to the location of the seaside town of Hastings in East Sussex England. It was here the famous super tournament known as Hastings 1895 was played.

To set the period, electricity was starting to take hold in America with Westinghouse generators pumping out Tesla's AC versus Edison's DC since the late 1880's. This meant that lighting for the chess event's evening sessions may very well have been through electric means. For Chessloser, bicycle manufacturer Schwinn, was launched in Germany in this year. On the political front, France's President Casimir-Perier resigned in disgust on January 17 and was succeeded by Félix Faure. As the new government took office, the former premier Alexandre Ribot resumed his position as minister of finance, but after a financial scandal, he was forced into resignation once again.

Hasting's history can claim fame through its connection with the Norman conquest of England; and also because it became one of the medieval Cinque Ports. Hastings was, for centuries, an 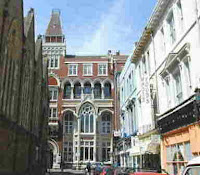 important fishing port; although much reduced, it has the largest beach-based fishing fleet in England. As with many other such places, the town became a watering place in the 1760s, and then, with the coming of the railway, a seaside resort.

In 1895, the Brassey Institute was place where the 22 participants battled for top prize of 150 British pounds. Players lodged in the Queen’s Hotel, except for Pillsbury. He explained: "I want to be quiet. I mean to win this tournament!"

Eighteen of the 22 players were pictured here:

In the rules of the event, the schedule included playing on Mondays-Wednesdays and Fridays and Saturdays. Thursdays were left for adjournments. The games began at 1PM in the afternoon, taking a two our break from 5-7PM. The games were to conclude by 10PM with no adjournment until 60 moves were reached in this round robin structure.

Time limits were 30 moves in two hours with subsequent time controls being 15 moves per hour. This led me to wonder what the the clocks may have looked like. I found the pictures below on the web of chess clocks of the 1890-1895 period.

My coverage of the games will begin on the next post. I decided to highlight a player per post covering the top half. Since Henry Edward Bird is the oldest of the contestants, at age 69, as well as being a young participant in the London 1851 event ( at the age of 25), I felt he'd be a good starting point to bridge the two events as I begin this summer series.
I hope you enjoy.
Editorial note: Bird is actually 65 in this event as he was only 21 at the London 1851 since his birthdate is July 14, 1830. I got age 69 from the Hastings 1895, centennial Edition as reported by the original Author, Horace F. Cheshire in the biography section of the book.
Posted by BlunderProne at 5:23 PM

Sweet! Looking forward to it.

I am very excited as well. I just received my copy of the Hastings 1895 tournament book in the mail. I want to study some Steinitz and Pillsbury games. It will be fun to see your reports.

Any knights errant thinking of playing Hastings and looking for others to go? I'm interested (not a knight though).

Hi, I just created a chess blog and posted a couple of my games (I'm an amateur). I'd appreciate if anyone has the time to maybe analyze and leave feedback about my play or my blog. Thanks.
chessandstuff.blogspot.com