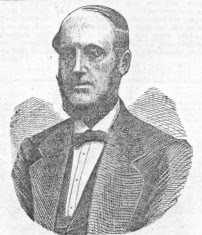 Born on July 14, 1830, Henry Edward Bird was the oldest participant at this event in Hastings of 1895. Since his birthday is tomorrow and he is my cross over player from the London 1851 series I covered, I want to cover his games this week.

First, a little background is in order about this proper English Gentleman whose main occupation was that of an accountant. His passion for chess emerged following the London 1851 event. Where prior he was a regular at the St. George's club with the likes of Staunton and Williams. He was a talker and it has been said that he "lived for chess, and would play anybody anywhere, any time, under any conditions."

During the 44 years between these two events, his successes included a few first place finishes in London's British Chess Association events held at the Simpson's in 1889 and 1890. A writer of chess history, his book is available online here .
Despite being considered the " Grand Old Man of Chess" at the event, a titled he relished, he still managed to finish with 9 points out of 21 placing him 15th. In this post, I review his first 10 rounds which shows this old lion still has some teeth.
I posted the first five rounds here following the rounds 6-10 here . I ask for your patience in allowing these to load in chess.com. I provided my commentary along with the pointed annotations form the text " Hastings 1895, Grand International Chess Congress"
In round 1 as Black against Albin, he plays this brilliant move on 34 leaving his bishop on b7 hanging! The ensuing Kingside attack is too much for his opponent. 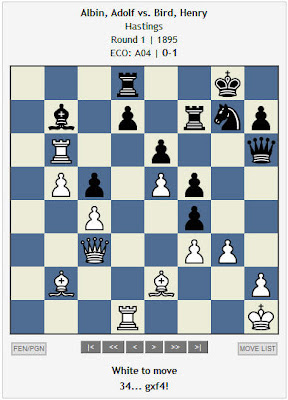 He draws the next couple of rounds against Walbrodt and von Bardelben in which both annotators remark less than stellar accomplishments by both parties. Bird had a remarkable opening and middlegame against Walbrodt but didn't follow through in the endgame.
In Round four against Blackburne, he plays a 71 move slug fest with no adjournment. The game swung in favor of either side at various points in the game starting with Blackburne's 13...g5! move beginning a nice combination. They approached an endgame where Bird had a material advantage with a pawn but due to the poor pawn structure had a hard time converting to a full point. Blackburne comes back as a tired Bird allows him to snatch up a couple pawns. But this old Lion still had some teeth as he created an outside passed pawn with threats. Both agreed to a draw.
Against Lasker in round 5 he fell into a queen trap as seen here on move 29 : 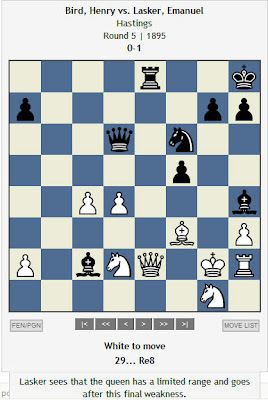 In round 6, with a mate threat on his heels, Marco saves his game with a three-fold repetition draw from Bird. Bird fires back in round 7 with a victory against Vergani by finding a very resourceful move in this complicated position netting a passed pawn: 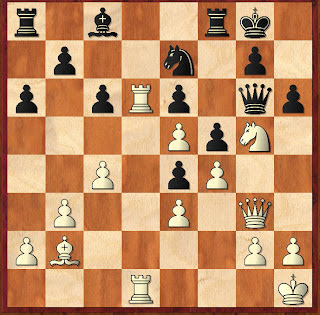 Round 8 was the clash of the two ( older) titans, pitting Steinitz against Bird in an epoch battle. It appeared that Steinitz's time had passed had he been more aggressive with the white pieces. Bird was allowed to establish a knight on an advanced rank that rivaled a rook. If you are going to review only one game, this one is worth the merit.

Rounds 9 was a draw against Schlecter and Round 10, playing an Evans Gambit against the powerful Chigorin, Bird manages a threefold repetition to save a gambit gone flat. ( that's another game worth looking at).

After the first ten rounds, Henry Bird has scored 6 of the 9 points he will finish with in this event. Not a bad showing for a non-professional of the era.

In the second part, he Plays Pillsbury , Tarrasch, and Janowski along with some of the others. I'll let you digest these for a few days until I wrap up Bird in the next post.

Posted by BlunderProne at 12:34 PM

Interesting. I love those old guys
playing, like Korchnoi being 77 years old.
I remember many years ago reading about Bird's Defense in Ruy Lopez (1.e4 e5 2.Nf3 Nc6 3.Bb5 Nd4), never actually tried it, probably should at least online. Also would be fun to try his defense 1. f4. Both things are sound, but rare.

I was just playing over Albin - Bird. What a fascinating game! This guy playing chess 100 years ago was sharper at 65 than most of us are at 20.

On move 21, Bird passed up trading off his d-pawn with 21...d5!?. Perhaps he knew he was better than Albin in the middlegame and wanted to avoid an open file which would allow White to trade off the rooks and give him few chances to express his tactical superiority?

Strategically, Albin seemed to be winning at points but he couldn't find a way to break through.