I’ll have a Benoni Samisch on a light Rye.

Playing the Queen’s Gambit as white opens the door to lots of responses from Black. The more popular defenses I encounter at the club against 1.d4 are the King’s Indian, the Benoni, Grunfeld and Nimzo-Indian. As a continuation from my last post I thought I’d split this into two parts and take a look at Benoni and King’s Indian pawn formations because I think they are related. 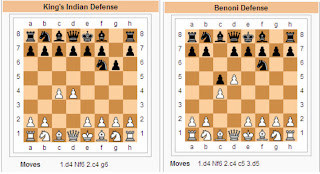 A look at the Pawn structure after the first couple of moves reveals the hypermodern theme of daring white an expanded pawn center. Black immediately takes a stance on slowing the advance of white’s e4 with the Nf6 move. The concept of these first few moves is all centered around control of e4 and d4. White wishes to accomplish this with pawns while Black will use indirect methods.

For the King’s Indian Defense,

both King side minor pieces are influencing the central squares while White gets a chance to get c4 d4 and e4 filled with pawns and a Nc3 for support. This opening shows up in 1922 by Reti with a Win against Samisch. Yates and Euwe popularized it as well in that decade where it showed up in Karlsbad, Leeds and Liverpool. At first, this defense was suspect because a lot of these earlier games seemed to give White a considerable amount of freedom.

I mention this historic introduction because this is Black’s first challenge in the pawn formation. How does he compensate for a slightly cramped position? If black holds back too long on either …c5 or …e5 to open the position, White will be able to enjoy the space advantage. Thus, after white grabs the center with 1.d4 Nf6 2.c4 g6 3.Nc3 Bg7 4.e4 Black’s first objective is to deal with the center. The two choices are then either to castle or to begin playing pawns in the center with the supporting …d6.
The Modern games have …d6 favored over 0-0 since it opens the possibilities for a Bg4 and a place for Blsck’s Q-Knight to go in support of the center and the e5 push.

After d5 or 0-0, White has several options including the Main line with 5Nf3, the Fianchetto variation 5.g3 or the one I like 5.f3, the Samisch variation.

Black Follows with 0-0 or immediately with e5 and white advances to d5. At some point the following Pawn structure is reached after about 7 moves: 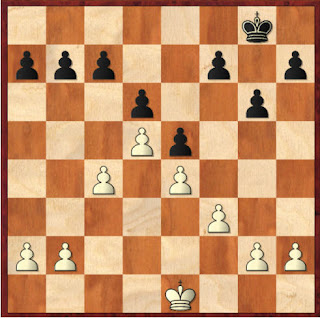 Right away, if this were an endgame, White’s King is positioned to march over to the Queenside and advance the troops. The essence of this pawn formation is that of the d5-pawn chain:


The theme is a race for a breakthrough on opposite flanks - Black must try to whip up a kingside attack before White's heavy pieces penetrate with devastating effect on the c file. Opposite side castling is common with a pawn push by white on the King side. The position was thought to strongly favour White until a seminal game (Taimanov-Najdorf 1953) where Black introduced the maneuver Rf8-f7 (After f5 is played of course), Bg7-f8 ( to keep the watch on the weak d6 base for Black), Rf7-g7 as a strong defense agaisnt the marauding white pawns and pieces. Play is much slower with tempo being of little value and featuring piece maneuvering by both sides, Black focusing on the c7-c6 break and White often trying to play on the kingside with the f4 break.


Understanding this makes looking at a variation for the Benoni a little easier. Historically, the “Sorrow Child” was named as such from the studies of a Jewish Scholar, Aaron Reinganum who suffered from depression and sought relief on the chess board. Black’s pawn on d6 becomes rather sad if not handled correctly.

The benoni was originally thought to be a newer upgrade to the King’s Indian since it advanced one of the freeing moves right away. White wants to support the e4 advance with 4.Nc3. Black will fianchetto and have similar aspirations for King side attacks, timely and freeing central pawn breaks, while avoiding cramped positions. 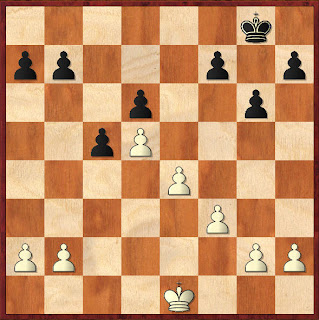 The same ideas from the d5-pawn chain are relevant here too. Black’s weakness on d6 is pronounced. The breaking move f7-f5 is important. White will continue to advance f3-f4 and push e4-e5 if needed. Castling Q-side is common for White and then after sliding the king over to the b-file, action on the c-file with the major pieces is not uncommon. Black needs to wait on the king side attack and redirect efforts to queenside.

In the Samisch, White will play the g1 knight to e2, the pawn on f3 prevents Black from intruding on g4 with a Knight or a Bishop. Bishops on e3 and d3 ( though in the benoni formation if the Bishop can go to c4 that might actually be stronger) with the Queen on d2 creating a battery on the c1-h6 diagonal are typical as this sets up a nice advance of pawns on the kingside ( h2-h4, g2-g4, h4-h5 etc)

Here is a recent game I played at the club. It’s not perfect play but you can see I was able to be flexible with the understanding of the d5-pawn chain formation and actually gained a pawn at one point. The game ended in a draw as my concentration was distracted by outside influences part way through the game.


Next post, pawn formations from the Grunfeld will be discussed along with the Nimzo-Indian. With the Black’s pawn on d5, I elected a different approach.

I hope this information is helpful considering its from the understanding of an amateur such as myself. This is how I process the information overload of too many variations. I try to find themes I can identify through the pawns.
Posted by BlunderProne at 9:57 AM

This was a brilliant game by both sides, very instructive, but I can't help but think that White didn't have a winning chance in the endgame based on one idea.

Did you consider sacking the d5 pawn? I may have even played Bxg6, when Re7 seems the only safe reply for Black, but your move looked good too, taking the pawn on c4.

The thing is, IMHO, you want to find a way to sack that d-pawn and open up the position for your bishops. Not finding winning chances in the position will probably hold back your rating some, IMHO, because it was a lot of work to get there and getting to that point justified your opening strategy.

Black played some marvelous defensive moves in the opening, but I can't help but think that White still got what should have been wanted.

I've heard the term "son of sorrow" applied to the Benoni, but didn't realize that that was the actual Hebrew translation of the word Benoni. But then again, isn't 'ben' - son(?)

This opening type is almost all I ever play nowadays, and after reading this, I actually have an improved understanding of some of the stuff that's going on.

This pawn structure should be an excellent series.

i see you still at it, the irrepressible blunderprone. bravo! 'not inextensive' is the phrase that comes to mind!