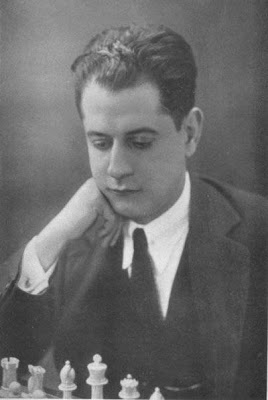 Born November 19, 1888, much has already been written about this Cuban national’s prodigious beginnings. The short story is that he learned chess by watching his father at the age of 4, ( picture on right is Capablanca at age 10)

pointed out an illegal move, then beat him twice. Being a mere hack of chess history, I will not even attempt a lame paraphrased lengthy bio about this grand champion. A player of this caliper deserves much greater articulation of the English language than an engineer as myself can only begin to scratch the surface.

What I will focus on, is what I learned about his reputation prior to New York 1924. Jose Raul Capablanca was on a roll. He entered the New York International event undefeated for 63 consecutive games spanning a period from February 10, 1916 to his one and only loss in the fifth round with another child prodigy, Richard Reti ( covered in this previous post with the game here) on March 21, 1924. As an Adult, he lost only 35 serious games, TOTAL! I lose that many in one year. Given his stellar reputation, it wasn’t any wonder that he was favored to be the winner of this event.

I’d like to take a short note about opening preparation at this event. With the eleven competitors, for the first half of the event, several seemed to have a prepared line. Most notably was Richard Reti and his Hypermodern style of none other than the Reti-opening. Capablanca however, held on to his positional style of play. A style which gets its roots from Steinitz and Tarrasch looking for incremental advantages but taking also being tactically sharp in open positions.

He didn’t prepare any special lines for this event. That is not to say he wasn’t prepared. Several of the top masters knew there was going to be a Hypermodern flavor to the event and tended to keep the cards close in the first half. During the 2 week break before the second half of the tournament resumed, the players had a chance to “reflect” on the games.

That is why we see Capablanca with a a rather cautious score of 5 draws three wins and 1 loss ( to Reti in round 5 if you recall).. His Draw to Alekhine in Round 4 was a quiet game that transposed to a French Defense from a 1.d4 beginning ending in an equal R+2P endgame.
Waking up after round 5’s reality check from Reti, he hits the ground running against Tartakower in round 6 where he turns a seemingly drawn game upside down in the endgame, sacrificing pawns to take advantage of a vicious R+P endgame with a mobile pawn mass.

In round 9, against Bogoljubow, he finds the one weakness of the Colle-Zuckertorte system and latches on right from the start. He piles up the pieces on the c-file and pulls this Knight Sacrifice to rip open the file and win the game: 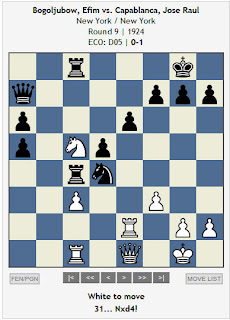 The Most interesting game was his victory against Dr. Emanuel Lasker in round 14. Capablanca exchanges a knight for 3 pawns and the initiative during a strong attack. (Diagram 26.Nxd5!) 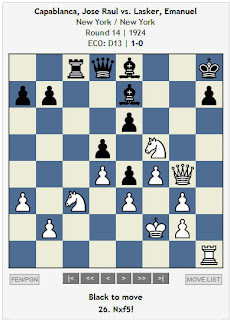 Capablanca’s “grudge match against Reti comes in round 21. A seemingly drawn endgame played conservatively by Reti gets blown away as Capablanca shows the power of having control of the center in the middle game as it transitions to an endgame advantage. Using distant opposition, Capablanca makes his one advantage, a passed pawn, his biggest priority.

Part of Capablanca’s reign had to do with the “London Rule” he established in 1922 following the London 1922 event. Amongst other things, one of the conditions proposed by Capablanca was that the challenger would have to raise at least ten thousand dollars for the prize money There was an increasing number of strong chess players and it was felt that the world champion should not be able to evade challenges to his title, as had been done in the past. At this tournament, some of the leading players of the time, including Alexander Alekhine, Efim Bogoljubov, Geza Maroczy, Richard Reti, Akiba Rubinstein, Savielly Tartakower and Milan Vidmar, met to discuss rules for the conduct of future world championships.

Rubinstein and Nimzovitch both challenged Capablanca but were unable to raise the funds. Alekhine’s 1927 challenge was backed by a group of businessmen from Argentina as well as the president of Argentina! There was a sense of rivalry at this time between the two titans. In New York 1927, he beat Alekhine quite easily in a quadruple round robin event as well as Nimzivotch and Spielmann.
Later that year, the Argentinian funded World title match between him and Alekhine would have made Capablanca the safe bet. However, Alekhine, who was never able to defeat Capablanca prior, was well prepared and beat the champion in the first game. Capablanca came back and won games 3 and 7 but Alekhine held on in Buenos Aires and beat the champion in rounds 11 and 12 and three more time after a long series of draws ( for a total of 25 in the entire event).

Alekhine was quoted as saying:


How did it happen that he lost to me? I must confess that even now I cannot answer that question with certainty, since in 1927 I did not believe that I was superior to him. Perhaps the chief reason for his defeat was his over-estimation of his own powers arising out of his overwhelming victory at New York 1927, and his underestimation of mine.

Alekhine refused to play a rematch despite the precondition of the match.

He decided to insist on the same London Rules of 1927. By then the collapse of the financial markets came in 1929 and Capablanca had a difficult time satisfying this condition. Contrary to the conditions, Alekhine did accept challenges by Bogoljubow twice. Throughout Alekhine's first tenure as champion (1927-1935), he refused to play in the same tournaments as Capablanca, and indeed was able to prevent Capablanca's participation in events which Alekhine himself wanted to play.
Despite Alekhine’s “shunning”, Capablanca continued to play strong in tournaments from 1928 to 1931 with several first place finishes and not one placing lower than third. Between 1931 -1934 he took a brief hiatus to serious chess, only playing at the Manhattan Chess Club and Simuls. He started playing seriously again in 1934 and placed fourth at Hastings 1934-35. It wouldn’t be until Nottingham 1936, tying with Botvinik for first place, that he played in a match with Alekhine.

This was Capablanca's first game with Alekhine since their great match, and the Cuban did not miss his chance to avenge that defeat. He had the worse position, but caught Alekhine in such a deep trap, luring him into giving up three pieces for two rooks. Their feud was still intense, so they were never seen seated together at the board for more than a few seconds. Each man made his move and then got up and walked around. 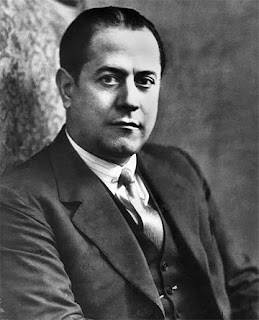 In 1938, his health took a turn for the worst as he suffered a stroke during the AVRO tournament. He ended up with the worst result of his career placing seventh out of eight. He seemed to bounce back in 1939 at Margate where he tied 2nd and 3rd place. His last tournament was the 1939 Chess Olympiad where he made the best score on the top board for Cuba.
On 7 March 1942, he was happily kibitzing a skittles game at the Manhattan Chess Club in New York when he collapsed from a stroke. He was taken to Mount Sinai hospital, where he died the next morning. The autopsy showed that there were numerous hemorrhages in his heart tissue related to the stroke. Remarkably, the Cuban's great rival, German-born Emanuel Lasker, had died in that very hospital only a year earlier.
Posted by BlunderProne at 10:19 PM

Capablanca was a great player.

Btw, nowhere in your post you touch the subject that got Capablanca the title of being a lazy player. What do you know about that?

@CT: Well at one point I read that he didn't prepare any openings and only relied on his experience going into this tournament, but I lost the link ( didn't save) and couldn't find it again. But after reading the chess cafe archived articles on teh openings of NY1924, I decided that, true, he probably wasn't in true form in the first four rounds ( drawing to Janowski was a hint) that he did "wake up" after Reti's game in round 5.

He is probably most famous for doing little to no studying. It is hard to imagine the kind of giant he could have been had he been more prepared.

Great stuff BP!!! I got caught up in the excitement of the battle between he and Alekhine it was a great description.

Look what he did just with natural talent,just think what he could have done if he studied as much as Alekhine.

He was one of the all time chess greats.
His games are full of gems.

Blunder, this series is awesome and this article is a gem. I have enormous admiration for Capablanca the champion and Capablanca the man. I spent an afternoon once on Edward Winter's website reading all articles relating to Capablanca. Botvinnik said something like Capa was the greatest genius he ever met, and that Capa would need 6 months to learn modern theory and then could come back and dominate in the early 1980s. Reuben Fine said he could almost break even with Alekhine in blitz but Capa blew him away!! What a genius and a gentleman. He married hot actresses too.

nice post !
I would just like to let you know that saying Reti was a child prodigy is not quite close to being accurate. He had to work a lot before he started getting acknowledged as a good player.