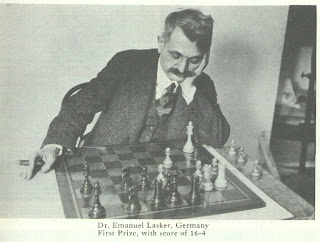 When I reported his third place finish at Hastings 1895 I included a lengthy biography about this highly educated and well versed player. So I will elect not to rehash his early biography here. Back in Hastings, at the age of 26, he showed the potential of a World Class Champion. In the period between Hastings 1895 and New York 1924, he became the second World Champion following William Steinitz. He held the title from 1894 to 1921 ( 27 years).

By the time New York 1924 rolled around, at 55, a veteran of world class competition and a form world champion, some thought he was a little passed his prime entering this event. Given the rise of Capablanca’s reign as new World Champion and the rise of the Hyper-moderns only fueled the speculation. His calm demeanor, poise and steady hand at the chess board had him enter the last round already closing the first place prize regardless of the outcome as he finished with 16 points ( 13+ 1- 6 =) a full point and a ½ ahead of Capablanca.

Lasker in his prime, was known to pull some miraculous victories from seemingly difficult if not lost positions. He was about as solid a positional player as they come. His only loss was to Capablanca in round 14 being given a dose of his own tactical medicine. Lasker first drew his strongest rival in round 2 in a quick game of only 30 moves and offering an early queen exchange. In studying Andrew Soltis’ book “Turning Advantage into Victory” he talks about the conditions surrounding a queen exchange to consider:

1) Who is ahead in material?
2) What positional assets are there?
3) Is there a sense of urgency or counterplay ( what is the "mood")?
4) How willthe possible piece exchange alter your plans?
5) Is there a concrete winning plan or a general plan for improvement? 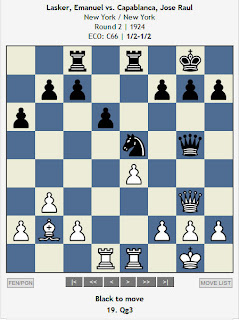 In the game against Capablanca, the material was even, the only assets Lasker really had was a knight centrally located. Both sides had pawn majorities on opposing wings. There were not any good counter measures or urgent threats. Once the pieces got exchanged down, the semi open d-file would not be an issue. Meaning this game was doomed to a draw once the queens left the board.

In round 3, he defeats Alekhine rather soundly with an exchange Slav. Here, white starts with an initiative and development advantage. In building a King’s side attack, Lasker’s defense closes the temporal disadvantages and makes Alekhine a little impatient as he tries to force the issue. Alekhine ends up allowing Lasker to counter attack whick exposes the weakness in his own kingside and turns the table.

He delivers a very instructive R+N versus R+B end game against Bogoljubow in round 8. Dr. Lasker uses the “Berlin Wall” defense of the Ruy Lopez. He is well versed in this variation and has a plus score against white offsetting the databases that score this as a rather drawish game for Black ( and white). In the hands of a skilled craftsman like Lasker, an opportunity to create long term weaknesses in White’s structure is typical of his style. Then playing to a favorable endgame is his priority. Bogoljubow gives up the bishop pair and the fight begins. Dr. Lasker drops a pawn to allow his rook an active roll and that is enough to over come the drawish look of this endgame 71 moves later.
He takes on Richard Reti’s MacCutcheon Variation of the french in round 10. Reti plays a little too passively which allows Lasker to target the uncastled king through a central attack and a battery on the d-file. Then, using the f-pawn like a battering ram, he obliterates any defense the black pieces have and finishes with a nice combination. 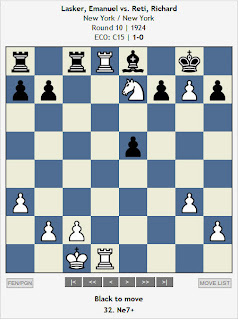 Despite the last round being a moot point for first place, he plays Marshall in full force. Marshall offers Dr. Lasker a gambit in the exchange Ruy Lopez after the former champion skirts the Marshall attack variation. With the extra pawn, Lasker makes every move count towards the endgame, nurturing the baby queen advancing on the e-file. Lasker even willingly drops a couple pawns to keep this advance going forward. The advance e-pawn is too much for the American to stop.

Dr. Emanuel Lasker was a proponent for using Algebraic notation. Richard Reti followed his lead and recorded their games at this event using this new universal system. After winning the New York 1924 chess tournament and finishing second at Moscow in 1925 (1½ points behind Efim Bogoljubow, ½ point ahead of Capablanca), he effectively retired from serious chess. Oddly enough, he and his brother, Berthold, had written a drama, Vom Menschen die Geschichte ("History of Mankind"). During the Moscow Match in 1925, he received a telegram that the drama had been accepted for performance at the Lessing theatre in Berlin. The play was not a success.
In 1927, he went on to write , Lasker’s Manual of Chess. He wrote Books about other games like “Encyclopedia of Games ( 1929) and Das verständige Kartenspiel (means "Sensible Card Play"; 1929. He wrote about other board games and Bridge in the 1930’s. Lasker became an expert Bridge player, representing Germany in international events in the early 1930’s.

Lasker and his wife left Germany in the mid 1930s ( fleeing Hitler’s discrimination against Jews) and settled in Moscow. However, Stalin’s “great Purge” started about the time they arrived. In 1937, he and his wife moved to the United states ( first in Chicago and then In New York) . He tried to support himself by giving chess and bridge lectures but was too old for any real serious competition. He dies of a kidney infection in new York on January 11, 1941 at the age of 72.
Posted by BlunderProne at 5:22 PM

Nailed it. Great ending to a great tournament. Lasker is just the freaking man. I have a book by Soltis 'Why Lasker Matters' that you've inspired me to polish off perhaps take a look :)

A great player but his brother Berthold was the better writer of the two. Nevertheless he brought the chess world many fantastique games.