We interrupt our regularly scheduled New York 1924 History tour to bring you the following ramblings of a sleep deprived chess addict.

It’s Tuesday, I must play chess!

Despite being on a business trip in Aalborg, Denmark, I woke up this morning in a cold sweat, craving chess. Like the junkie I am, I managed to discover the Aalborg Skakforening ( Aalborg Chess Club) which was a short walk from my Hotel. 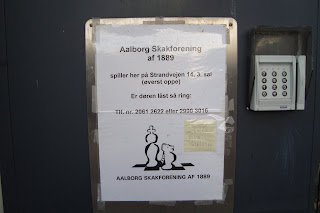 Frist, I’d like to digress about this trip. I determined my trip this far is a bad exercise in sleep depravation supplemented by strong coffee. I flew out Saturday and determined that I was up for 32 hours straight including the Day Light Saving Time warp back home. Sunday I crashed for 5 hours woke up at 1:30 AM and finally fell back asleep at 4:30 only to wake up at 6. I must have drank an entire pot of coffee during the course of the day. But I am not talking about your average coffee maker size carafe, rather the volume of coffee was equivalent to what is found in church basements and AA meetings. I still felt like I had too much blood in the caffeine system as my head was in a cloud.

Speaking of which, I’ve determined that the weather this time of year here is varying shades of gray. Today started out dark gray with rain, followed by light gray with clearing, then a snap down pour of a bluish gray with hale ending with some sun. I hear in the summer it stays light until 11PM. Depsite being located on the 57 degree Latitude in the Northern Hemisphere, the grass was green, but the trees were bare still. No Snow! 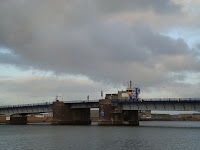 I’m also in the land of Ikea because everywhere I look, the furnishings could probably be tracked to some isle number and bin location of the Swedish furniture chain. Hotel furnishings, the office furniture of the company I am visiting, even the sushi restaurant ( Hey, Denmark has good fish… this was a safe bet) all have that blond wood industrial décor. I’ll bet if I look hard enough I’ll find Swedish meatballs with that cranberry sauce.

So back to the chess adventure, the chess venue is part of the Aalborg University and right on the Fjord. I follow some older duffer into the building and say “ chess?” I was wearing my universal chess tee shirt. He looks at me, “yes”. I was pleased to see he spoke some English and proceeded to tell him I was ditching my colleagues for an exciting evening of chess. He looked at me puzzled, “ People don’t normally refer to chess as exciting.” I told him that’s Ok , I’m not normal. 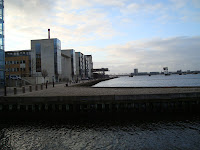 I met the Club chairman who welcomed me. I was not to play in the regular serious event but allowed to hang out in the “social” area for a casual game. The club furnished wooden chess sets and boards with the Danish Skak Union logo on it. Nobody was speaking English. That was OK, I wanted to experience the club.

Chess is universal in my tired eyes. Several people were gathered around a board kibitzing about a game. I followed along and laughed when they did, nodded when it looked like a serious move and basically tried to blend in. Then I got ahead of myself. I thought I saw a better move. But with my tired sleep deprived eyes, I didn’t see the check I was walking into. More laughter, at least I brought some brevity with me. Man was I tired.

Then I here some muttering of the word “amerikaner” and pointing. I smile and gesture to a set. One guy wearing a NY Yankees shirt comes over. I gesture to his shirt and comment that it should read Boston Red Sox. I give a thumbs down and say “ Yankees”. He laughs, shakes his head no, and gives a thumbs up. He wanted to play some blitz, I really didn’t I wanted a much slower game. But I soldiered on. The game didn’t last all that long. I lost on time.

I played another person who was evenly matched. I missed his blunder which would have given me an even endgame if the clock didn’t run out. The next game he blundered again and I saw

it…. And knew it was a blunder, he shrugged knowingly it was a bad move and commented I would probably win. I said, in my condition I wouldn’t count on me finding the right plan. Sure enough I missed a better move but still had enough of an attack to clean up on the king side and win before the flag fell. I realized I was just too damn tired to play. I checked out a few more games and headed back to my hole.

I’ll say this, unlike my club, there were no sign of children once the games really began. Apparently they were there an hour earlier and left soon after the adults games began. Then I realized why this was the Social chess club room. Once the last minor left the premises,

a case of beer came up. For a few Krones, folks were playing and drinking beer. I should have had an advantage since I don’t drink, but being jet lagged I was evenly matched.

I recommend the Aalborg Skakfoerning for some fun chess if you are traveling in these parts. I wish I could have understood them a little but they sure made me feel like it was Tuesday night. Chess is universal on the 64 squares.
Posted by BlunderProne at 4:39 PM

Due to your plight I'll take today off from trolling the chess blogs.

A wonderfull evening was had by you, i am jealous

Hope the jetlag is over now otherwise Aalborg needs to buy some extra tons of coffee during your stay. ;-)

you are INTERNATIONAL!!! that is awesome right there!

George was awarded the IP title at the recent FIDE meeting in Turkey...

@Globular, I am honored and will wear that title well.

Sweet, I've always thought that chess was universal, now that you've expericnced it makes me feel good that chess nerds are chess nerds no matter where you go.

So did you play?

@Brenan: Yes... but I only played G5 games. I was really hoping to have played something a little more serious as I was not up to playing any speed chess. I only won one game. I played DCF rated players in the 1700-1800 range ( FIDE sort of) so I was about evenly matched.