Self Analysis: Or Why I still SUCK at chess 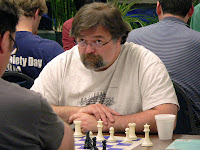 Before I dive into round 2 at the London 1851 time machine, I decided to do some much needed analysis on my most recent losses. Mr. Jacobs, the MDLM cult Naysayer, did have some sound advice about looking over the most recent loses to get a hint of where you need to improve. But his idea isn't all that original, in fact, You'll find the likes of Dan Heisman and my friend Rolf Wetzell ( of Chess Master at any Age).

In a modernization approach and following advice from a source I can't remember where found ( so if you recognize this method and its you... sorry for not shouting out and linking to original post), I make use of a data base to achieve my goals. 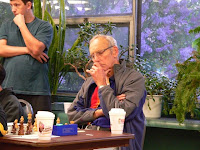 First the idea: Wetzel suggests to create flash cards of critical positions in your recent games to help you move the ideas to a more permanent memory. Modernizing this is to use a data base to catalog these critical positions.

I picked my last 10 losses at the club and evaluated each one on my own first adding my thoughts, fears, misconceptions I had at each point in the game.

Then I fritzed ( saving my annotations) doing a group analysis of the sorry lot by going into Data base mode for Fritz, selecting the games to evaluate and running the tool over night.

After the analysis was complete, I painstakingly went through each game to see where I sucked. I created a "critical position" and tactical training ( right click on move and select special annotation to get to the menu). I can later go back and do tactical puzzles in MDLM style if I so wish to BURN into my brain what to do RIGHT next time.

I now have a growing database of sucky games I played! What patterns did this reveal to me as weaknesses to work on?

1) ROTE VERSUS SHARP : I tend to play openings really sucky. I play rote " natural" moves rather than recognize a weakness on my opponents and play according to what the position dictates.

2)ENDGAME PRECOGNITION: In the early middle games, I am not in tuned with pawn structures and how to use them to my advantage for when the game shifts to endgame tactics.

3) PREMATURE ATTACKS: A lot of my losses are due to a premature attack that fizzles out when king safety or shoring up weaker posts first make better sense.

4) TACTICAL NEGLIGENCE: I can see tactics for ME... but I fail to properly evaluate my opponent's ability to inflict tactical pain on me.

My plan as I prepare for the World Open will continue with studying master games ( Old Timey chess in particular as well as Master Games of the openings I play to get an understanding of nuances and types of pawn structures and how to play them in the early and middle games.

As for the endgame precognition, I think this site from the Exeter Chess Club on Pawn Formations will be helpful. It has a nice overview of every pawn formation imaginable and plans for both Black and White. I want to know the pawn formations I encounter most down cold! It presents a whole new level to pattern recognition.

Premature attack prevention will have to be a result of diligent awareness over the board as experience is the best teacher.

Tactics.... back to the circles for a refresher but add to it the new tactical training from my Sucky database.

As for Blunder-daughter, she's coming with me to the World Open as well and prepares for the U900 trophy. But finishing eigth grade is her number one priority. 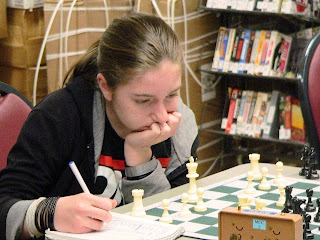 Posted by BlunderProne at 3:00 PM

I think that is a great idea! When I have a few more games under my belt I will undertake the same mission of creating a working date base of greatest bad moments.

Have you ever done much in the way of using "Solitaire Chess" as part of a study program? I have seen it recommended quite a bit, so I am trying it using the Guess the Move feature at Chessgames.com

By the way, what does Old-timey chess mean? Does that refer to a particular era or style of chess?

Thanks for the always insightful blog!

@DK:Thnaks for the vite of confidence!

@TommyG: Old Timey chess does refer to studying old master games of a particulkar period like how I've been covering the London 1851 games ( scroll down a little and also check my archives and the games I post and comment on at chess.com search on blunderprone if interested)

gosh dang man, this is not a vote. you think that this is a stupid vote? no. it is enshrined as a absolute eulidian fact. you must learn.

Hmmm .... certainly good to get a handle on your shortcomings ... but ... if you are not spending over 50% of your chess training at a real chess board practicing chess thinking, knowing thyself will have limited value.

Here is my secret to chess improvement: turn of your computer, turn off your TV.

Also getting an eight grade education is probably not that important either.

This is a fitting post to be reading have gotten home from the chess club early. Why am I home early? Because I played like a total moron and on my 18th move had the choice of getting mated or losing a rook and probably some pawns and still have a crappy position. Somtimes I really hate this game.

in the picture you have that "are you kidding me with that move?" look. awesome.

Interesting method. (I'm too lazy to try, but it would be interesting to track rating vs length of time using the method).

One thing that is always scary reviewing our own games is that something really, really significant gets overlooked. Not tactics, 'cause Fritz will pic that up, but the "this square/rank/piece/diagonal is the heart of this type position".

Something like that Pawn formation page helps. But besides getting a strong human player to review, it always feels like the analysis is not complete enough. But it probably can't be helped much.

Re: the first picture. Did you also manage to get a pic of the woman you were ogling there?

@My: I hope you are not asuming I not playing OTB games on a regular basis. This analysis is due to the games I played over the last 3 months alone. I do mix about 50/50 between the club and on line. Oh... and we don't TV much at all... especially Blunderdaughter. But thanks for ponting that out. It's obvious to some of us.

@Polly: It sounds like a wacky wednesday entry ready for the maiking.

@( you other rascals): The picture of me with the "bird who caught the canary" pose was a candid shot as I saw the club photographer. Though there is a hot chess mom who helps out at times... that was not a case of me "adjusting to my bifocals" ...this time. My daughter, on the other hand, saw the photographer coming... and made like she was in deep concentration...even though it wasn't her move adn a "kicking" song was on her MP3 player.

The World Open sounds like fun! What section will you be entering?

Blunderprone: I have seen your OTB games, so I am aware you use a real chessboard :-) What I meant was that the time you spend training for these OTB games is best spent at a physical chessboard. Of course analyzing your weaknesses, charting your performance rating from an opening tabiya, these are useful. If you can solve problems blindfold, then you can spend less time at a board!

Solving from a book is also acceptable, probably more valuable than from a computer screen. Some strong players just read chess books without using a board!

A technique I suggest: set up a position of interest, set the chess clock for 15 minutes. Press the clock. Move whenever you are ready.

A variation on this is to write down the analysis tree before you decide on your move.

If the position is from a book, followed by some analysis, you can compare your analyses.

But it is all about the journey, not the destination.

Mr. Harris .. as Blunder-daughter calls you,
My study session does include a real board. I learned a while back ( doing the circles of hell) that I have a hard time going from 2D world to 3D world and seeing the same patterns. So I DO incorporate a board more often now.
While i am doing the London 1851 studies and other GM game studies, I use a board, but I still enter my tree analysis in CB as I want a better method of documentation and retainment in my computer.

I also push myself to go over games without a board but with a book that at least has 2-3 diagrams per game. I am at the point where I can follow game rather well and now i can even visualize the variations in the text and still see the position correctly.

On occasion I use the clock while doing "solataire" chess. But lately I've been concentrating mostly on going over games of the London 1851 event, reviewing my own craptacular games and master games of the openings I play.

Blunderdaughter on the other hand... views studying chess like she does her homework...something to avoid and waits until we are all asleep before sneaking down to watch TV. Oh to be a rebellious 14 year old again.

It sounds like a sound approach to me! I agree it's a great pic of you in the middle of the game.