( Back to our regularly scheduled program. I'm glad you all liked my Knight's errant Promotional Video)

The other matches I wanted to touch on in this historic event, are Karl Mayet versus Captain Hugh Alexander Kennedy; Elijah Williams (aka the "British Sloth) versus Johan Lowenthal and the terribly lopsided match between Jozsef Szen and Samuel Newham.
The single elimination knock out round one had some powerful players paired off fro 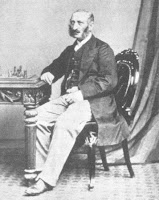 m the start only to get eliminated. Johan Lowenthal represented Hungary despite having fled to America following his participation in the failed Hungarian Revolution of 1848. He briefly established himself in business while residing in America but following the London 1851 tournament, he established a permanent residence in England. Later, in 1857, he defeated Anderssen to win first place in the Manchester Tournament. Later, he became a somewhat of a mentor to an up and coming Paul Morphy when he traveled to New Orleans to play this phenom. So it's little sad that he got knocked off in the first round by a student of Howard Staunton's, Elijah Williams.

In their first encounter ( More game commentary here) , Lowenthal does a misstep in the position below on Move 26 and plays 26. Qe7 which allows the sloth to do a deflection tactic netting a minor piece. I think Lowenthal might have been frazzled by his opponent's notoriously long decisions ( on average, it was reported that he took two and a half hours PER MOVE!) 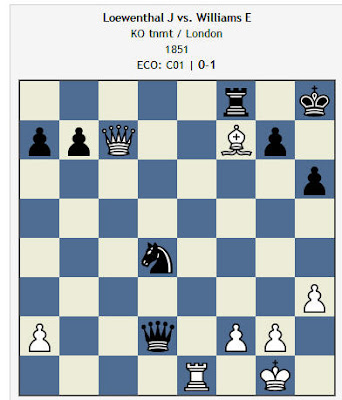 During the second match , Lowenthal made a tremendous comeback and applied the strategic principle of multiple weaknesses, overworking William's defenses and breaking through. The final match turned a bishop pair into a an imprisoned bishop as the Sloth got the upper hand in the best of three match.
Former British army captain and leading London chess player, Captain Hugh Alexander Kennedy, was paired against Carl Mayet and knocked him out in two games. The first match was also a case where the laws of two weaknesses prevailed. The second match was a rather dull mirrored English opening. It looked like Mayet threw away the endgame in this position 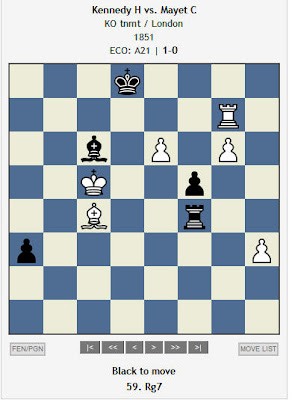 Jozsef Szen was an endgame madman from Hungary. In the first game against the second tiered fill-in Samuel Newham, he makes use of the power of 2 connected passed pawns on the 6th rank versus a Rook! In the second game he eyes the endgame by move 7 and plays accordingly. He makes use of the bishop pair in a semi open game which proves to be not a match to Newham's passive play with knights. Then his outside passed pawn is becomes a strategic advantage.
The exercise of going through all these first round matches in this first International Event was worthwhile. Even the "bad games" had some lessons as to how to win against a weaker opponent. I have it done to myself all too often but there are times I don't know how to make use of an advantage given my opponent's playing strength or passive middle game. All these games I find very instructive. Forcing myself to understand them on my terms first has left a longer impression other than the read and nod approach of the past.
In the commentaries to my games collection at my chess.com blog ; Likesforest commented that for the Romantic Period of chess ( 1851 was prime time for this period), quite a few of these games were more of the Scientific or even Hypermodern style. I have to agree, I was watching these games hoping to see more swashbuckling gambits. Instead, positional themes developed like IQP, and the law law of weaknesses.
I plan to cover the next 4 rounds but not all the matches. Rather I will focus on the matches of Anderssen, Wyvill, Williams and Staunton through the next few rounds as these were the first through fourth place winners of this event and should prove some merit. I hope to have my commentary done on this event by the end of the month. Then I will spin the time machine to Hastings 1895 as a Warm-up for the World Open.

Posted by BlunderProne at 6:05 PM

I am relatively new to chess and chess blogging. I enjoyed this post. I enjoy the history of the game a lot. Anyway, I just wanted to say and make your acquaintance.

Thanks Tommy. did you see my other video on the history of this event?

I just watched your video on the tournament! Great stuff, much better than Ken Burns' Jazz Documentary!!

Seriously I dug it...I didn't know that the "Immortal Game" was a casual game during that tournament. I also didn't know how time controls came into being!

after reading your erudite study, i've come to the conclusion that *REAL* chess is played by men with beards, and if you wanna throw down real chess, you need a beard...

chessloser, that's hilarious... I'm gonna try to grow a beard before my next tourney.

Beards and MUTTON CHOPS...like Staunton! I know it improved my rating by at least 100 points.