How I won my section at the Porstmouth Open

I cleared first place at the Portsmouth open ( U1750 section)!

I think my slump is over. I went to the Portsmouth open with the intent of just playing some decent chess and not like a caveman with my hair on fire. I didn’t want to get caught up in memory games with “prepared openings” and I also didn’t want to underestimate my lower rated opponent. I just wanted to play chess one move at a time… and that I did. 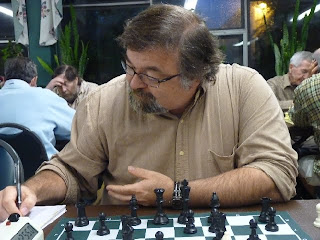 My first round had me paired as White with someone 200 points lower rated than myself. I didn’t take this for granted as he fired off the Chigoran Defense. This is the one line of pawn formations I didn’t prepare for but I decided to just play the position. My opponent made the mistake of launching a premature attack, though I had trouble capitalizing on it, I did have momentum through the middle game. Despite not making the exact best moves, I just played sound moves and looked to an endgame that I could play. I ended up outplaying him in the end game.

Next up was a solid Class C player. We started in on an exchange Caro-kann. He missed a middle game tactic that allowed me to fork his queen and rook. When you win material, it’s a totally different game. I regrouped the forces and systematically put the squeeze on him.

Next opponent was one underrated Class C player who was slashing through the top players in the section like a Ghinzu knife through paper. He had been taking some serious lessons from Dan Heisman and it was showing. OK, I had a chance to get a free lesson from DH as well earlier in the year so I kind of knew what he was teaching him and decided to not freak out. When my opponent launched into the London System, I was somewhat relieved because I once played this opening quite regularly and knew what I didn’t like about it. I caught an early c5 in and began to hassle his queenside before he could counter with an attack on the King side. I pulled a small tactic that got me a key central pawn and strategically placing my queen in the center of the board versus his uncastled king. I was able to throw a noose around him with a knight and Queen snare.

My last opponent was all jacked up. He was the top seed in the section and needed the win to salvage points. He was prepping 10 minutes before our match, I was meditating in the fresh air and enjoying the sun despite the 32 degree weather. I had white and met his Nimzo-indian with a Rubenstein. He countered with the Fisher variation but I knew about this scheme and just played the position. I made it through the opening and had started an attack on the Kingside while my opponent’s pieces were corralled off to the queenside. At one point I had a nice Queen sacrifice and had he taken it, it was mate. Here’s the game.

The big take away for me was practicing a real basic thought process. During the opening I was making sure my pieces were as active as possible, my king was as safe as possible and made it a point to see what my opponent wanted after each of his moves. I didn’t take any unnecessary chances. Even though I didn’t make the best moves for each game, I made sure I was at least as developed as my opponent and had as much if not more freedom of movement of my pieces. I paid attention to both sides of the board and didn't get stuck thinking I had to play ONLY on the side I made a plan for. I stayed flexible and it worked. Even when I had my hands around my opponent’s neck ( figuratively of course), I regrouped or was prepared to do so in case of counter play. Often, I got up to clear my head when the game got tense and focused on something other than the board. Doing so allowed me to come back refreshed.

As far as skill preparation , all I was doing to prepare for this event was tactics. I won the endgame in the first game because of a tactic I could calculate when the time was right. The second and third game presented tactical opportunities as well and when the fruit was ripe, I was the first to pluck it. My last game was a real sweet deal as my opponent missed a classic CT-ART style Bishop and Rook mate allowing me to clean up and expose his King. I still missed more eloquent ways to finish off the last guy but I played it safer.

Posted by BlunderProne at 8:52 PM

Congratulations! I know that when I am playing well I find that I am concentrating on just developing my pieces, getting them all into a good position before lashing out without any tactics. It sounds like you had a similar experience.

Great win! Great tournament performance, ahead of 17 others.

Now can you see how studying those tournament books helped you out?

Your opponent played positional mistakes, and it looked like you had a quicker win after his ..f6? with ..Nxh7. I am going to say ..Nd7, ..Nf8 was best for Black, without looking at a computer (giving up the h-pawn).

Then your opponent plays ..Qa6 and ..Qxa2. I mean, this was as much a positional win as it was a tactical win, and it was a very tactical execution.

Still, I think you were right to study just tactics as you have the positional skills from books and your earlier games with prior experience in those openings.

All you needed to put it all together was composure, and this time you had exactly that. Congrats! :-)

Congratulations on winning. The only thing I can see is this handy pawn promotion trick that you should see next time you have such a position
28. Qg7+ Ke8 29. f7+ Kd7 30. f8=Q+ Kc6 31. Qxa3/Qxa8/Qf3+. The attack was played slowly but with confidence, black didn't make much of an effort defending in the meantime: winning that pawn on a2 took way too much time that could have been spent defending. Easy to say afterwards as your Qxg6+ was well spotted in advance

Nice to hear of your success. Study of Openings,Middlegame, Endgame, Tactics and Calculation all coming together to play properly in the moment. No major flaws in one area to hold you back.

It must of been very enjoyable to play in this balanced way.

I was thinking about playing in this event. Could've given you more competition for the prize (assuming I were playing up to speed, which can't be assumed).

You see, if one doesn't think about the result but just play the game the stress is less and one plays more fun games.

Well done with this new thought proces you have. Seems like you have taken the next step in your improvement.

Nice job and nice game to show, George! After finally ending my losing streak with an unexpectedly quick win in the last round, I lit out and caught a movie, so didn't see the tournament's conclusion.

I hope you enjoyed the Dinnerhorn restaurant. I have a "quasi-chess" question for you, related to future tournaments at this site. Did you get lunch at the Roundabout Diner next to the site? I had an odd tactical blind spot for that place, probably partly because I was always pressed for time to eat before each day's 2nd round, and I knew of McDonald's just past Dinnerhorn, so raced there each time and wolfed the food down. If you went to the Roundabout, is their service fast enough if you had, say, only 15-20 minutes to eat?

@ken: Actually I found myself at the Bread Box and getting a quick specialty sub there. It was closer than MD's and they even served Moxie! I was in and out within 20 minutes both days.

Congratulations Blunder. Playing those Class C kids can be challenging, as they never seem to stay class c very long...and let's face it that happens at someone's expense.

Good to see that your simplification of the thought process is working for you.

Congats on the tournament and well played final game.

I thought a good example of good chess.

Seemed you had a critical advantage in Space pretty much the whole game.

Seems to add up to an excellent win!

Hi George,
Nice win in the last round.

Great job! See, it didn't take so long to get back your "sea legs"!

He was prepping 10 minutes before our match, I was meditating in the fresh air and enjoying the sun despite the 32 degree weather.

This is the way to do it. I've always believed there's rarely improvement with "cramming". Being in a relaxed mental state is much more important.

You might want to check out this book. 10+ pages of analysis per game.

I saw a glowing review of this book that I can't seem to find .... It mentioned that it was a remarkable undertaking despite some editing issues.

Too advanced for me but if you had a year to study it. It could prove interesting 8)

Well judging from the picture -- it's obvious that you had help. You had the ubiquitous John Curdo whispering to you over your shoulder. So all you have to do is make sure you play with John sitting behind you, and good things will follow.