What would Anderssen do? 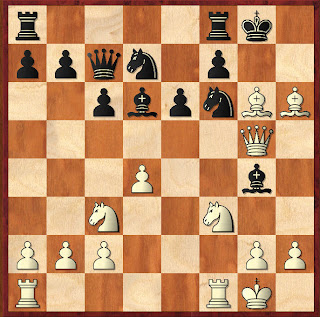 I was black this week at the club and happened upon this horrible position that had White's bishops coming down on my kingside like a meteor shower. I was impressed with the Lasker like Bishop sacs to open my position which was reached via a Blackmere gambit gone wildly like a Caro-Kan:

I was in a tight spot and by rights I should have given him the point. But being who I am and the tenacious personality in a seemingly lost position... I played:

Kh8 15.Bh7 Nh5 This was a hard one to see but I figured exchanging the bishops was necessary. Time to liquidate the forces and bear down for a endgame with a rook versus minor piece.... I hoped. 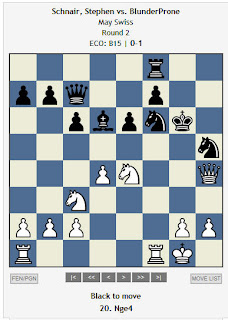 I thought about this awful predicament I got myself into knowing my opponent was 200 points lower rated than I but tactically sharp and more awake than I.
I bucked up and figured what the hell, " What would Anderssen DO?" I could liquidate even more but at the cost of a bishop and be a whole rook down. However, my opponent's second rook isn't active yet and I would have my minor pieces all over on the exposed king. He may have some tactical acuity, but I had TIME and calculation skills that were this shy of mediocre. ( duelling patzers). I played the following moves:

Ilya Krasik of the Boston Blitz, during post game analysis, humbled me by saying " What are you so excited for? You are down a rook and should lose! All White should do is Play Kg1. Otherwise he loses."

A wild ride indeed. As ugly as this duckling was... here was the swan that got me the point: 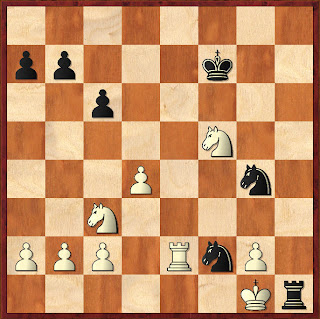 Posted by BlunderProne at 5:50 PM

Hehe, I agree with Ilya, but it was a nice idea in spite of this. You don't have much going for you in that position.