Blunder's Wrap up at the World.

Steve gave a good account of the facilities at this post so I will not duplicate. ( as well as a report on his scoring) 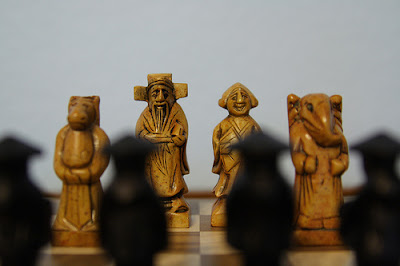 My last round was lost because I was "trying something" again. You'd think I have had enough negative reinforcement so I'd stop doing this. But I guess I had a problem stopping myself. I saw a fianchetto'd bishop and thought I'd go after it agressively following some pointers from a 14 year old the previous day about handling the pirc. Now, this was NOT the pirc, rather it was a Queen Pawn game and I just felt like experiementing. I had nothing to lose. I accomplished my goal rather quickly but it left my queen in an awkward spot, lost a tempo then started dropping pawns. Oh well.

Then I participated in 10 rounds of sheer madness... BLITZ! I love it. I prepared with several rounds on ICC and a can of redbull. At 11:45PM the first pairings went up. By 2:30AM it was all over.... in a blurr. The excitement was hot. At one point, Nakamura on the top board was fighting it out with someone when at 3 seconds to go, his opponent hits the clock so hard, the clock went blank! OF COURSE NAKAMURA still one...despite the GIANT coors can someone gave him ... Hmm is he of age? Well, his father was looking the other way.

Yes, I had TONS of fun. I watched many great games. I re-connected with folks I met last year and made many more new friends this year. I even got to personally congratulate Mr. Nakamura on the 9 way tie for first ( resolved with a single). He smiled at my shirt ( I wasn't wearing a chess shirt...instead my maxwell's equations shirt that starts with "and god staid"
Posted by BlunderProne at 7:47 PM

its way too late, wrote the LONG dialogue with BDK about Chess Relearner, and played, shucks, 36 bullet games today (not the 1/0 variety, but 0/4) so many games 6 to 7 min, some actually 8 when go to an endgame...

It was nice meeting you at the tournament! I did see your shirt the next day - very nice! I only scored 4.5/9. Maybe next year.

like i said on atomic patzer's blog, sounds like you had a blast. ok, next year, i'm going to that tournament, i'll see you guys there..

congrats on your finish! if i were half as good as you, i'd be way better than i am now....

I'm in. I'm there next year, muthas, and I'm gonna win the open section!!!

:) Only if my Monroi helps me.

We should start a blogosphere pool to put in money so Tempo can come out for the World Open. That would be a trip.