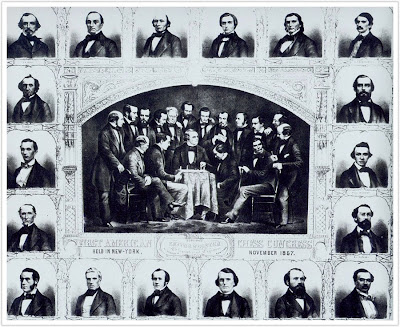 New York has a rich chess history of Super tournaments. Back in 1857, The first American Chess Congress was held. Paul Morphy won the event but refused the hefty prize of $300 ( estimated worth about $7000 today). Instead, he accepted a silver service consisting of a pitcher, four goblets and a tray! The event invited the top 16 American players shown below in the lithograph. Louis Paulsen was one of the players who came in second behind Morphy.

The Fifth (held in 1880 won by George Henry Mackenzie) and sixth ( held in 1889 and tied for first place by Mikhail Chigoran and Max Weiss,) American Chess Congresses were also held in New York Where this later event seemed to be the first to open the invitations to the greater International community. Gunsburg, Blackburne and Amos Burns finished 3-5th in the cross table. The top American , Lipschutz, game in sixth place. Because of such strong players at the sixth congress, challenges were made to then World Champion, Steinitz. Steinitz supported the idea that once a clear winner was determined that he must face a challenge from the second or third place competitor within a Month. IN a playoff match, Max Weiss and Chigoran remained tied. Weiss was not interested in playing a championship match. Ginsburg, however, challenged Chigoran and drew a match with him in 1890. 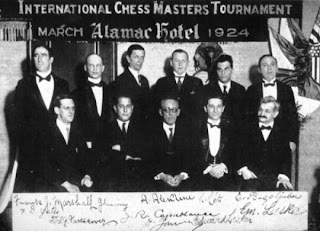 Fast forward 34 years and in 1924, we see ANOTHER great super tournament. This time at the site of the Alamac Hotel from March 6 to April 18th, we see an event organized by the Manhattan Chess Club ( A friendly rival to the Marshall Chess Club). This invited another group of strong international players. I mentioned in my last post that Dr. Em Lasker, at age 54, wins first place in this event and $1500 (worth $19,000 in today’s dollars). Richard Reti was one who broke Capablanca’s winning streak incidentally. ( I did a whole series on this event a couple years ago). The top American was Frank Marshall. He came in fourth.

Funny I should mention, Frank Marshall. Inspired by the great coffee houses of the past that supported this great game, like Café De La Regence and Simpsons in the strand, he decided to form a chess club that rivaled the Manhatten Chess Club (no longer in existence since 2002). His objective was to establish a meeting place for chess lovers and provide instruction for young players.

So with this long winded somewhat historical thread, I present the next big New York strong tournament. The 4th Annual New York International will be held on June 17th-21st. Top prize is $5000 in the open, and $4000 in the top B and C section ( U2200 and U1800). If you win, you could do what Morphy did and demand a silver set instead of the cash! Maybe you can throw the gloves down and challenge a World Champion. One thing is for certain, there will be opportunities for IM and GM norms because of such a strong event. The main event will be held at St. John’s University. You can register on line at the Marshall CC : http://www.marshallchessclub.org

So if you are in the spirit of playing in a historic chess town, in a strong event sponsored by a historic chess club, you owe it to yourself to come on down to New York in couple weeks and get your game on.

Foot note: alright, guys at Brooklyn 64, if this gets you the Blunderprone Bump you seek… all I ask for in return is a Marshall CC tee-shirt in return ;)
Posted by BlunderProne at 10:25 AM