Gearing up for the World Open.

When I tell my co-workers what I am about to do for vacation next week, the common response I get “ You call that a vacation?” For the uninformed, the American chess scene that lacks sponsorships like our European cou

nter parts, attracting the masses of amateurs with a hefty prize does draw a crowd. However, the time table is a grueling 6 hours per game at 2 games a day during the peak. So when they hear I am signing up for 12 hours a day while holding my head as if I am in agony staring at 64 squares and a few little wooden pieces scattered about, they tend to go “ I you say so”. I call that fun. 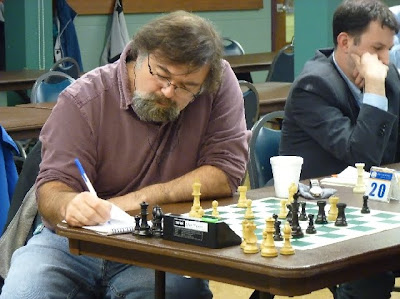 I’ve been ramping up my preparations for this event. Because I am not a big named GM nor am I any way near the level of play of a GM, I have no “second” helping me train. Rather, my “second” is of the silicon base and add to it a very good chess club that has strong players who I can get a “lesson” from when I play against them. I’ve shared some of those lessons recently.

What I’d like to share about is how I am using my “silicon second”. Years ago, I signed up for pieces of software called Bookup, spent the money they Mike Leahy updated the software on several occasions almost to the point where it annoyed me as the next version always meant “ for a little more money” . At one point I emailed him back and told him flat out “ look, I paid for this earlier version and I use it, I don’t want to have to pay more for something that does the same thing.”

Mike was very receptive to this feedback and provided me with the registration code for the new stuff with no strings attached. That was two years ago. I finally got over myself and installed the new version called Chess Opening Wizard.

First, I must say that I used to use it purely as a memory drill exercise putting the tool in “training” mode where I would select an opening and play through variation after variation without thinking too much. Problem with this is that I have a horrible memory to retain such rote responses. I needed to augment the learning experience by verbal queues. This led me to barking at my computer screen cursory positional values but it was somewhat successful. The problem was that the database I used would drill each variation down to the last move of the game before cycling to the next branch causing me to start and stop the training at various points.

Then, I discovered the feature of “speed learning” . The COW tool will take a starting position of your choice in your database and create a set of flash card like problems from that line. You can select how far down the rabbit hole you want to go, select whose side to move for the positions and voila! You have a canned batch of exercises specifically out of your repertoire! I can’t tell you how excited I am about this. I’ve been trying to do this with ChessBase but its so cumbersome. Mind you CB has its merits …much for another post later.

Mike Leahy has a nice chess improvement tool out there and he’s been doing this for quite a while. http://www.bookup.com/ It’s worth checking out the “light” versions to get an idea.

Posted by BlunderProne at 1:39 PM

Good luck at the World Open. I will have to play around with the speed learning in COW.

That bookup site feels like a maze to me.

It's amazing how little time I've spent on openings during the last few months where I've had my best results, virtually no openings study.

Under 1800, openings are not so meaningful because opponents miss so many good moves that it becomes more important to know how to punish bad moves.

I was just looking at a friend's Bb5 Sicilian which he won. I can learn nothing from the opening part of that game because his opponent played ..d6 and then ..d5 and there was zero reason I could see for not playing ..d5 in one go (among countless such mistakes to follow). This stuff happens all the time, or they will play dubious, too aggressive, and you have to refute it. Again, almost zero openings value to me. MDLM was right, other methods fail!! :-D

If there is one good thing about opening's study it will be if it gets you to focus on the squares. See as much "blindfold chess" as possible and one will have fewer problems OTB, IMHO.

It's good that you are studying for it, and then hopefully still not over-chessed come game day. It's a long tournament, and sprinkling in a couple draws between the load of games usually gives me a great chance of staying in the thick of things. I say go for the win, call their bluff, but if you do happen to get a draw or two, then that's not bad, it usually means one's next opponent won't be like + or - 400 points ratings difference, and it will be an interesting game.

There are free alternatives to bookup:
Chess Position Trainer: http://www.chesspositiontrainer.com/
and what i use:
Chess Hero
http://innokuo.altervista.org/chesshero.html

To be able to use chesshero as opening trainer you need to be able to create your opening-lessons by your self as pgn, that might be difficult but its a wonderful trainingstool