Baffled by the Benko

Because I play 1.d4 with the White pieces, I am constantly challenged to recall a dozen or so different responses like QGD, QGA, Nimzo-Indian, King’s Indian, Grufeld, Benoni, Dutch, Pirc, etc… I try to find a “system” for my insanity and steer the game towards a familiar pawn structure or position I am somewhat comfortable with. For the most part, I have been able to steer most of the games to an advanced d5 pawn chain, a palatable IQP or a Minority attack.

The big exception, has been the Benko Gambit.

At the last World Open, I was prepared for most of the above variations against 1.4 except for the Benko because I hadn’t run into all that much at the club. I was out of my game early as I declined the gambit and tried like hell to steer it into a more familiar positional territory. After the game, Dan Heisman spoke with me and gave me sage advice: “always accept the gambit , make them prove its merit”.

That’s all I remembered. I never looked at it again because I haven’t run into all that often, until recently. Once again, in the lion’s den at the club, I was faced with another Master. 1.d4 Nf6 2.c4 c5 3.d5 I thought I was getting ready for a Benoni… but then 3…b5 was played. I took the pawn 4.cxb5 a6 and took again 5 bxa6 Bxa6 and then asked myself “now what?”

My game is too embarrassing to post here as it quickly went down hill fast from this point as I tried to avoid Black taking my Bishop on f1 and ruining my chances of castling…only to leave me in a horribly undeveloped position with Black on the attack.

Not all is lost. I asked my opponent to go over the fine points of this wretched opening and help me come up with a better plan that suits my style. Accepting the a6 pawn is a line but not for the faint of heart. It requires castling manual after the Bishop exchange on f1. It is very sharp tactically with open lines and lots of swashbuckling. I am more of a boa constrictor than a venomous viper I asked for a different way. 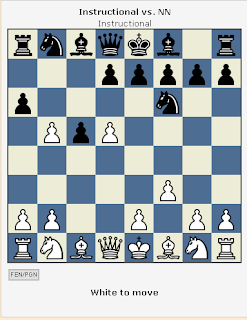 ( diagram) It doesn’t give Black the a6-f1 diagonal so early. Black will attempt to control the dark squares as they are weak with a Queen on b6 and B on c5. But that means playing …c4. White can grab Black’s c-pawn and hold on to two pawns fro compensation. 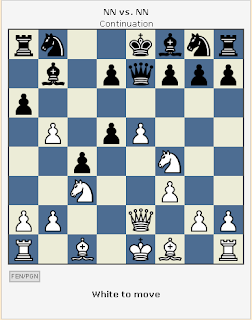 This is an attacking line that can be very dynamic. I am still exploring this and not sure I am comfortable with a piece exchange for initiative and two pawns: 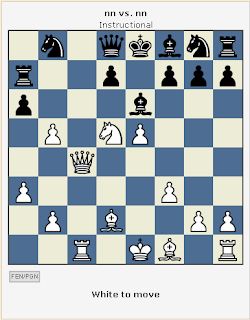 White has a two pawns, lead in development, initiative and an easier position to play in exchange for the knight.

My alternate choice is 5.e3 a quieter line still under review.

In any case, if I face this at the World Open, I will enjoy playing it knowing a little more about this gambit and what to avoid.

Posted by BlunderProne at 11:45 AM

Email ThisBlogThis!Share to TwitterShare to FacebookShare to Pinterest
Labels: http://1.bp.blogspot.com/-eocsaIt9WFM/Tf4oOu0WMOI/AAAAAAAABRQ/iwaWBhInIcI/s320/Benko2.png

I wish my only problem was the Benko. I played the Benko as Black at 40/2,G/1 tournaments for a couple years, it was my only defense to 1.d4, so trust me when I say that 'familiarity breeds contempt'. I gave it up because I finally felt that it was simply an unsound pawn sac, and agree with the advice that Dan Heisman gave you.

In fact, I think after bxa6..Bxa6 that White is simply winning, and that last I looked I figured ...Nxa6 is probably the only way to play that opening (but I didn't play this line, natch).

You posted once before a game that you lost, but you were up a pawn and lost your way in complications that had nothing to do with the opening, per se, IMHO. You are already a better player than you were back then, so it's an invalid comparison. It's value is mostly that it spooks you, and you are not "comfortable" playing against it.

I wish all I had to do was play White against the Benko. Seriously, I would switch from 1.e4 and bang on that Benko gambit all day long. I could play the declined, even the bad variations as White. It takes a very dynamic player to truly be a threat with the Benko, a high-skill level, IMHO. Maybe it's a great surprise weapon against certain players, that's about all I can say for it.

I won't play 1.d4 because I wouldn't know how to handle everything else, so that is quite an accomplishment for you! :-)

When I played it as Black, the f3 lines I liked playing against the least, but don't remember as it was over 10 years ago. I also played a couple hundred games with it online, mostly at slower time-controls.

I don't remember the theory much anymore and that looks like a sharp line you just showed, I don't even understand it. You can also study the hand-castling line ..Ba6xf1, KxBf1, then Kg2.

It's understandable that you are thinking of it as an "Opening" and evaluating it as such, but I think that is basically the wrong thing to do and what most players do. Ask yourself "What kind of _middlegame_ is it?" There are a lot of thing Black would like to do, yet can't without playing dubious moves.

Of course Black will win many games because the really relevant thing is the strength of the players regardless of the opening. If they are higher-rated and know the opening better, then of course you are at some disadvantage. The same is true of any opening.

I think another idea that GMs play is 5.b6 giving back the pawn.

Wow. I'd love to be able to get a lesson from a different master each week just for the price of playing in a month long tournament.
Wish I lived close enough to MWCC to be able to do that.

Played it like a pro. Accept the pawn. 6...Bxa6? is a dubieus move by black look at the game of Portisch. Carlsen also plays this variation. If black plays 6...g6 play a fianchetto but before you castle at move 10.Rb1! Like Kramnik does. And you will be alright.