Ernst Grunfeld introduce this defense against none other than Alexander Alekhine in Vienna in 1922. Oddly enough, Grunfeld was known more for his classical style ( Tarrasch-Steinitz school of chess) which tended to stay on the side of avoiding complex variations. Thus, when he deployed this defense against 1.d4, he challenged one of the Hypermodern proponents from the start.

Hat tip to RC_Wood from Chess.com for providing this game with annotations.

In the game, Alekhine takes on the exchange variation throwing everything including an early h4 pawn march. You see an early Bg5 which was later developed by Taimanov. He throws in a Bb5+ line made popular in the 1990’s. Alekhine’s folly seemed to be in not playing e4 early. 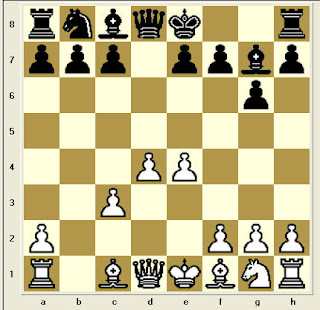 The position above reaches the main branching lines of either the Modern 7.Nf3 or the classical 7.Bc4. Other minor variations include 7.Bb5+ 7. Be3 7.Bg5, 7Qa5+ . This post will focus mainly on the Classical variation with 7.Bc4.

In my repertoire, with Rubinstein variation against the Nimzo-Indian and the Samisch against the KID, picking the classical in the exchange variation of the Grunfeld made the most sense since similar themes arise. The King knight typically goes to e2 but this time with the eye on f4, Castling King side is the only option, and the Queen Bishop will also go to e3 but can be played to g5 ( Taimanov variation).

The Queen rook will want most likely be used to support the c-file as Black will attack on the Queen side. White will have the initiative on the b-file in the end game but the weakness is centered around the c3 pawn. The pawn move to f3 comes about if the Black bishop moves to g4 or to prevent it in some cases.

After White plays 7.Bc4, Black has three main replies following the choices of either continuing with development or put pressure on d4. On 7…0-0, this keeps the development rush going, White plays Ne2 this is the main line continuation. The minor line with 7…b6 is a little slow and White can begin an attack on the Kingside with h4. 7…c5 makes a direct attack on the d4 square and white needs to support this with Ne2 followed by Be3 as Balck can build up forces on this immediately. 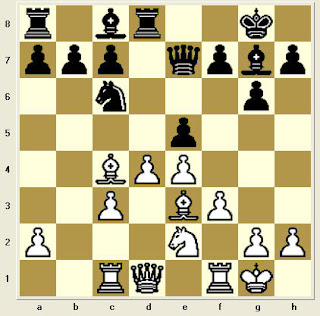 White needs to be cautious of not advancing the pawn to d5 too soon as Black will attack the Bishop with …Na5 where typically the bishop goes to the more aggressive square of d5. The Bishop is on a good diagonal ( a2-g8) for a king side attack if he can muster the troops.

If Black plays 8..b6, White can immediately begin a King side assault with h4. If Black follows with Nc6 , white will play Bd5 almost immediately if he can. If Black plays the 8…Qd7 first, white has time to castle. After 8…Qd7 9.0-0 b6 then white can actually begin an assault with the e4-e5 push. With the Bishop on c4 ( a2-g8 diagonal), the troops will rally to Nf4, Qg4 h4 and h5 if allowed, making for a strong attack. 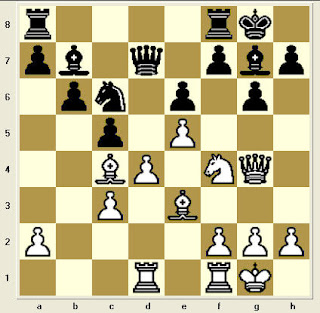 Similarities and differences within the repertoire so far:

It helps limit the breadth of opening variations to study if you can find similarities with certain groups. With the Samisch, Rubinstein and Grunfeld variations I reviewed in this past three posts, the similarities can be seen in early piece placement and d5-e4 pawn chain formations. But I have to caution about following “rote” systems of piece placements as the three variations covered are all very dynamic openings not meant for “safe” piece placement until you reach the middle game. Rather, knowing the nuances is critical and will help broaden my understanding of this complex game.

For instance, look at White’s King Bishop in all three opening variations. In the Grunfeld Exchange mainline, there is no doubt that the best placement for the King’s bishop is on c4 which is created after cxd5. This can not be achieved in either NI-Rubinstein or KID-Samish. In fact, the King’s Bishop becomes more of an awkward piece with Ne2 played early delaying the development of the king side.

Another factor to consider is when Black plays b6. The Fischer variation of the Rubinstein in the Nimzo-Indian is the most critical challenge ( in my opinion) and white needs to play energetically to save the king side. In the Grunfeld, this is more innocuous which usually allows white to grab some King side attacking initiative.

The last point I will bring up is White’s advance of the d-pawn to d5. We see this as a space grabbing move for the KID and NI variations discussed. This closes the center allowing for some careful piece maneuvering. The Black pawn on d6 could become an endgame liability so the middle game requires the right balance of piece migration and wing attacks. However, once the d-pawn is removed like in the Grunfeld, the position is not as closed. Both bishops are present for both sides. Quick precision and initiative take precedent over positional maneuvering.

I’m fired up! Next post I will look at the QGD orthodox and QGA.
Posted by BlunderProne at 1:30 PM

Little known fact: that Alekhine game was the impetus for insurance companies offering chess tournaments coverage, after the thrown King ricocheted off the wall, hitting a bystander in the eye.

Hi, I was wondering where you got that nice chess visor from.
I haven´t been able to get a right visor for my chess blog.
can you give a clue?
greetings from chile.