Editor’s note: Sorry for the delay to post this. I tried to contact Peter Biyiasas personally to get some first hand accounts and his perspective from this match. Ruth Haring was generous enough to forward me his email but I seemed to hit a brick wall. I’ll keep trying to reach other former players from this match. I hope to hear from at least one. 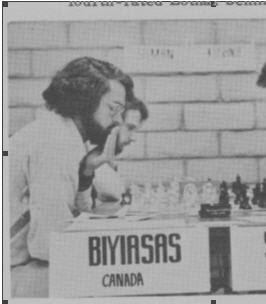 As Canadian Champion in 1972 and 1975, had this 25 year old local master as a strong candidate for the top prize at Lone Pine 1975. He had previously won a British Columbia Open 1972 where he had a history of victories in the Vancouver area starting in 1968. 1972 seemed to be a banner year for Peter as he also won the Zonal championship in Toronto which earned him the title of IM. A couple of his other victories leading up to this event included 1st-4th (tie) at Norristown in 1973, 1st place in 1973 and 174 at the British Columbia Diamond Jubilee Open and even came in 3rd place at the Pan American Championship in 1974.

At Lone Pine in 1975, he seemed to struggle with the strong competition but still managed to finish with 6 points which earned him a prize. Here are two games to highlight his attacking style of play.

The first won him a brilliancy prize in round nine and was published in Chess Life and Review. The game shows how Peter can play an aggressive game as Black with the King’s Indian Defense. I copied Peter’s game notes as best I could. He sacrifices a knight to open up channels to the white king and two moves later offers his ROOK! This is an amazing game.

In the last round he plays a King’s Indian Attack as white against GM Damjanovic’s Sicilian Defense. The classic plan in the KIA is to first go for a central pawn push and follow up with a King side attack. Peter accomplishes both by throwing all of his king side pawns at Black despite being castled on the king side! He uses bishops instead of pawns to provide enough cover while storming the barricades.


A fierce battle evolves around the opposing kings, major pieces and bishops. At one point Black sacrifices his bishop in hopes to simplify the exchange and gain a pawn for the endgame but it back fires and he loses to a classic deflection tactic where Peter wins the queen.

After Lone Pine, Peter earned his GM title in 1978 following a couple of strong finishes where tied in New York and Buenos Aries Olympiad. He continued to play in tournaments through the late 1970’s through 1985 where he retired from competitive chess. There are notes that he was married to Ruth Haring and that they had three children. He is best remembered for his contributions to the notorious King’s Indian Attack opening system.

Peter went to work as a programmer for IBM and later set up his own software company according to Chess Ninja over at the Daily Dirt.
Posted by BlunderProne at 4:44 PM

Naturally, I missed a couple mate threats because I am just me, but just goes to show, never give up in chess! and that includes remembering that your human opponent is not "Fritz".

You should interview Silman.

"You should interview Silman."

Excellent suggestion. He might fill in blanks for you and perhaps have some entertaining stories besides!