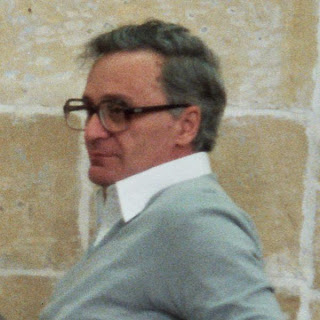 Leonid Aleksandrovich Shamkovich was 51 at the time of Lone Pines 1975. He was born in a Jewish family in Rostov-on-Don in Russia on the first of June in 1923. Nicknamed Prince because of his aristocratic bearing and manner of speech, Mr. Shamkovich was not among the leading Soviet players who dominated the game for most of the second half of the 20th century. He was known to play with great emotion, which made his results very uneven. Still, he was good enough to win the Russian championship in 1954 and 1956 and to tie for fifth place in the 1964-65 Soviet championship. He became a grandmaster in 1965. His best victory coming at Sochi in 1967, where he tied for first place with Nikolai Krogius, Vladimir Simagin, Boris Spassky and Alexander Zaitsev.

Three Years prior to Lone Pine 1975, Shamkovich left the Soviet Union, moving to Israel along with Liberzon and Kushnir. He did not stay in Israel for long. He moved to Canada in 1973 and to the United States at the end of that year, settling in New York City. By the time of this tournament, he was still considered a citizen of Israel.

He was well versed in the art of Sacrifice. In round 6 at LP1975, Shamkovich had white against Martz Williams’ Berlin defense.

The “Berlin Wall” was favorite defense of Arthur Bisguire against the Ruy Lopez. Black played a little too passive, not following some prescribed methods by those who played it regularly. Shamkovich begins by dismantling the wall in the center. But on move 27 was the nice finish. Shamkovich offers his Queen to open up the diagonal and follows through with some real simple chess.


In round 8 as Black, we see Shamkovich play a positional game to defeat the Grandmaster from Argentina, Oscar Panno. In this English opening, White comes out a little cramped only to allow Black an active pawn center.

This allows him to advance the d-pawn all the way to the 2nd rank. Because white is placed on the defensive after this pawn, Shamkovich secures his position even more with a nice out-posted knight in the center and complete control of the d-file. He picks up material by storming the advanced rank with all his pieces. Left with isolated pawn islands and one less rook, White graciously resigns.

Mr. Shamkovich's expertise was as an analyst and tactician. He was sought after as a coach, and worked for two world champions, Mikhail Tal and Garry Kasparov. He also wrote more than a dozen books, including ones on the Gruenfeld Defense and the Schliemann Defense, the latter a particularly tactical opening.


His Sacrifice in Chess begins, "A real sacrifice involves a radical change in the character of a game which cannot be effected without foresight, fantasy, and the willingness to risk."


Shamkovich died of complications from Parkinson's disease and cancer in his Brooklyn home on April 22, 2005.
Posted by BlunderProne at 7:42 PM

Pity his nerves got in the way when he played otherwise he would be one of the greatests of his time i guess.

I have his book - the Modern Chess Sacrifice. It is one of those where you feel you are leaving planet earth behind, the style of game.

You know the fried-liver attack, how things are up in the air, I've only read some of the book but it seems that every game is like that, sac the queen for a couple pieces. The piece counts get really strange, and next thing you know you _have_ to calculate to make any sense of where you are at or to hold on or win.

I just looked at those two game right now. Do you really understand what he is doing so much, like in that second game(?) It is hard, seems to take honest calculation to figure out his games. A chess master that I knew recommended his book to me. It's a top-notch book, but obviously it's not about winning through cheapo's, you have to work to understand the games, put in some time, but it seems worth it on some level. Like unclear seeming positions, but where he retains initiative long into the attack.

Wow can't believe I had never heard of him!

You should interview some living great players for your blog such as Silman and the others you mention in the recent posts. That would be awesome! What say you?

I think he is off interviewing Silman, thats why there is no recent post.

First, I've been overloaded and had to put my chess activities on a temporary shelf ( soon to change in a couple weeks... hopefully).

Second, I've tried contacting a lot of these players ( Browne, Evans, Yankovich etc)and the only one I heard back from was Larry Evans who was adamant about not being interviewed " Buy the book" was what I was told.

If you buy his new book you can learn what Bobby has been up to the past 2 years.

Good article. I'm going through his victory over Mertz in Chess Informant 19, which Shamkovich annotated. It is one of the reference games for ECO C67. It was a complicated mess before the sacrifice.