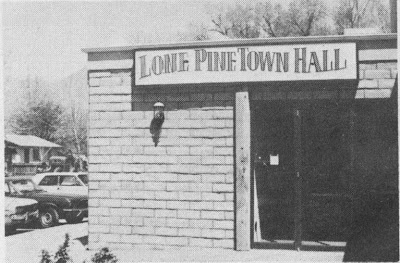 The time machine has landed me in a small little remote town in the eastern part of California near the Sierra Nevada Mountains. The year is 1975 and 44 chess players are arriving in this town that is about 10 blocks long and three blocks wide. All the games were played at the Lone Pine Town Hall, which Mr. Statham had built for the sole purpose of the anual event.

Back in 1965, a wealthy engineer and inventor named Louis D. Statham, sold his home in Los Angeles to none other than Hugh Hefner to settle into a quieter location in Lone Pine. Statham was a correspondence player and had a modest Class A rating. He loved chess so much that he wanted some chess players around Lone Pine. So he set up a series of masters tournaments footing the entire bill!

He started this series in 1971 with GM Isaac Kashdan as Arbiter. Between

1971-1974 the participants were mostly American and Canadian with the exception of a couple Eastern Europeans traveling abroad.

In 1975, he cast the net further almost on a dare. “ How many GM’s could we bring to Lone Pine if we tried?” Lone Pine was building a reputation as one of the best known sites in the U.S. He raised the prized fund to $12,500 ( about double the prize money in European events) and offered to pay the travel expenses guaranteed against any prize money. To be fair, the local GM’s were given $600 in lieu of travel expenses.

That is why, in 1975, this turned out to be the strongest tournament of the year. Twenty-two GM’s came to Lone Pine. From the Philippines, came Eugene Torre a freshly minted GM. From Argentina, Miquel Quinterros arrived ( though he’d been in the Philippines prior). Israel brought Vladimir Liberon, Leonid Shamkovich who were both ex-Russians immigrating. They traveled with Alla Kushnir, the only female IM. 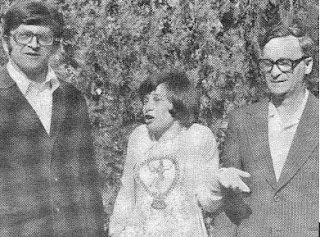 From Europe came nine GMs. Veterans of Lone Pine were Svetozar Gligoric from Yugoslavia (a good cross over from Zurich 1953) and Florrin Gheorghiu from Romania . Mata Damjanovic had to play two games in advance in a tournament in Birmingham, England because of a conflicting dates. From Hungary came, Isvtan Bilek, Istvan Csom and Gyoso Forintos. Iceland brought Gudmundur Sigurjonsson. Karl Robatsch came from Austria. Lothar Schmid of West Germany, was the chief arbiter of the Fischer-Spassky match in Iceland.

From Canada came Duncan Suttles and Abe Yanofsky. Oscar Panno and Hector Rosseto came from Argentina. Herman Pilnik came from Vennuzuela. From the U.S came Walter Borwne, Sam Reshevsky ( another veteran from Zurich 1953), Larry Evans and Pal Benko.
There were 11 International masters and 11 national masters. Included in this bunch were Jeremy Silman at 20 and Michael Rhodes at the tender age of 15. Arnold Denker and Arthur

Drave were the elder statesmen at 61 and 65 respectively.

With 44 chessplayers in this sleepy little town, several small hotels were filled and chessplayers were seen all over in coffee shops, tennis courts and even getting hair cuts.


It wasn’t without effort that Statham tried to bring in former world champions from the soviet union. Three Czechoslovakians accepted only later to have the federation decline their invites. The speculation was that they were forced to follow the lead of the soviet’s boycott to this event because of the battles that came about from Fischer-Karpov match during that period.

So what is in store you may ask? I plan on following the games and biographies of the Grandmasters. I will most likely have a post or two on some of the more famous national/international masters as they also provided some wonderful upsets.

The tournament book I will reference is “Grandmaster Chess: The book of the Louis D. Statham Lone Pine Masters-Plus Tournament, 1975” by GM Isaac Kashdan and the staff of the California Chess Reporter. The games are lightly annotated and I have no PGN of the entire event to work from. If any of my readers can locate the raw games from this event and provide a link I’d be much obliged. I found one reference to a PGN of a Lone Pine 1975 but it turned out to be the wrong event. Beware of the file 1975LP-PG.zip as it’s not the collection of games I am looking for though labeled as Lone Pine 1975. This turned out to be a different event of that year.

Back in 1975, chess informants were starting to become popular for opening preparation. Thus, Lone Pine 1975 happens the days before the generation of overly prepared openings through computer databases. Old fashioned preparation of reading books and building on the reputations of your predecessors was the mainstay here. We’ll be seeing a lot of Sicilians and English openings as they were the style of the day.


Gligoric was quoted as saying ( in the Chess Life and Review, July 1975) “ Lone Pine 1975 brought together an unusual gathering of people, some of whom had not met for ten or even twenty years. Naturally enough, the past was partly rebornat some of these chess boards, too.” He was referencing that many of the lines and systems which were popular in his youth were revived at Lone Pine. “At those rare moments when your commentator watches the ‘strange’ positions from the Two Knights Defense, Marshall Attack or Meran Defense, he cannot escape the queer, tender feeling of being refreshed by an old idea”

I’ll be entering all these games by hand into chess base, a labor of love. I will be providing commentary, descriptive annotations by the players and checking the variations with computer.

I hope you enjoy.
Posted by BlunderProne at 2:17 PM

Looking forward to the next instalments now that i can read them easily on my 25.5 inch screen (yes christmas is a wonderfull time with pretty presents). :-)

Hurrah! I will be reading with mucho gusto.

Nice information overall, but I think you mean Michael Rohde, not Michael Rhodes. Rohde is an interesting character, see http://en.wikipedia.org/wiki/Michael_Rohde_%28chess_player%29.

I think the interviews from the book "How to Get Better at Chess: Chess Masters on Their Art" came from this 1975 tournament (It may even say so in the book. The names of the players are nearly identical, if not completely identical.)

What makes Rohde an interesting character?

Hi Blunder Prone,
Looking forward to the series of articles.
Try the following site for the games, it might save you some work.

I emailed you a PGN of games, hope they are of use !
I keep intending to add a note on your 1953 Euwe blog entry.
His legacy also includes, a square named after him ( Max Euweplein in Amsterdam ), on which there is a large outdoor chess set, always in use when I pass by. Not too many players have that !
Also on that square is the Max Euwe centre. You can guess what goes on there (http://www.maxeuwe.nl/en/index.html).
Finally, the bridge leading into Max Euweplein is (I think, its not identified on maps :) named after Jan Hein Donner, another Dutch chess master, possibly a bit more "exuberant" and outspoken than Euwe. His chess columns ( & views ) are collected in his book 'De Koning', published in English as "The King:Chess Pieces" - much fun !!

I actually remember that tournament! I was in college at the time, and had been playing in tournaments for 3 years. I'm glad Nick was able to send you pgn of the games. I find it hard to believe that none the games aren't in Chessbase's mega database.

Tell us about the grandmaster draws! ;-p

Just kidding, I never researched this tournaments. It's a famous one that I know next to nothing about, unless an opening line quoted a game from there perhaps.

Not sure why Michael Rohde is an interesting character for Robinson, but here (http://nezhmet.wordpress.com/category/chess-players/michael-rohde/) you can see a stylish/scary/moody picture of him as a cover model from Chess Life in '77 when he gained his masters title at only 17 ?! Plus lots of other 70's chess memories, including a teenage Andy Soltis etc

Your blog posts are something for me to look forward to! Thanks for writing and great idea. Can't wait to hear more.

Who in the heck took the picture of Benko getting his hair cut?

The "grainy photos" are scanned in from the tournament book. The Photographers are Ron Chan ( mainly responsible for the photos) Alan Benson and F.E. Houghton. Unknown which one snapped Pal getting clipped. My guess would be Ron.

I read that the tournament was cancelled in 1982 due to the failing health of Mr. Statham who eventually died in 1983. It's too bad that he didn't allocate any of his fortune to continue the tournament after his passing.