The Lone Pine 1975 had three major groups. The top shelf included the list of Grandmasters who I’ll be chronicling in the coming posts. The next layer includes the international masters ( Ratings below 2500 and above 2300). My next post will include a few upsets from this category. What I’d like to cover in this post are few noteworthy games from the bottom that resulted in upsets from up and comers. 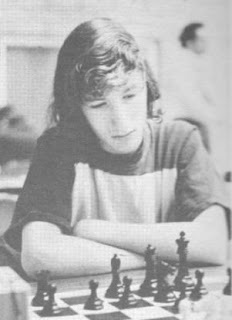 First up, is a very young 15 year old Michael Rohde. By the way, that is how it is spelled in the book and to spell it “Rhode” is not correct. Michael, born August 26, 1959, received the masters title at the tender age of 13 and in 1975 won the National Scholastic Champions Junior High School Champion. Even though he finished dead last at Lone Pine 1975, his attacking style was in noticeable form as he won a Brilliancy prize for the game listed here against International Master, John Grefe.

lliancy prize in three consecutive U.S. Chess Championships from 1986-1988. Some of his strongest finishes includes first place in the 1991 U.S. Open, tied for first at the World Open, and winning the NY state Championship and a few other titles. He took a break from chess to attend Law school 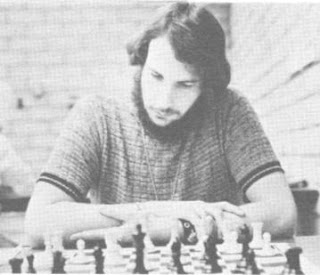 Honored to be included at such strong event, a young Texan, Jeremy Silman was just 20 years old. He was listed as having a rating of 2258 ( the lowest in the event) in 1975. It is unclear when he first became a master, though in an interview by Robert Brunnemer (http://www.chessvideos.tv/article-Robofriven-interviews-Jeremy-Silman-5.php) he mentions being at master strength at the age of 16. In this upset over IM Dumitru Ghizdavu, he plays a brilliant c3 Sicillian and handles an IQP with ease. It’s a beautiful battle of the center as Silman demonstrates how to strike on two weaknesses.

Silman goes on to get his IM title in 1988 but leading up to that, he had several no 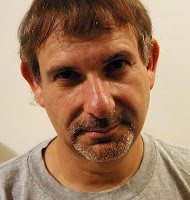 table events under his belt, like winning the U.S. Open in 1981 as well as the National and American opens in that decade. He is a popular author of several chess books geared for the amateur class player. I know I have a few in my library. He was also a Chess consultant for the 2001 movie, Harry Potter and the Sorcerer’s Stone.

Norman Weinstein was rated 2372 in 1975 at Lone Pine and is listed as a Master for that event though some sources indicate he earned the IM title in 1973 following becoming the U.S. Champion in 1973. The game highlighted below is his upset over GM Leonid Shamkovich where he plays an older Levenfish Variation against the Dragon Sicilian. He demonstrates the advantage of initiative combined with opposite sides castling can have with a marauding pawn raid. 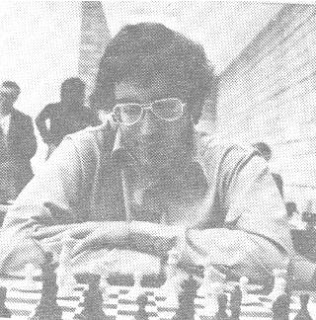 He left chess to become an investment banker at Banker’s Trust. In 1990 he convinced the firm to put an ad in Chess life reaching out to hire masters and Grandmaster. Max Dlugy was one of the GM’s to come on board. Weinstein’s name may ring an alarming bell for some as it is the same name associated with another chess player, Raymond Weinstein, who went to prison after killing an 83-year old. No worries, there was no relation to our current player turned banker/recruiter.
Posted by BlunderProne at 9:59 AM

"Weinstein’s name may ring an alarming bell for some..."

I thought about Gary 'Weinstein' Kasparov, not at the murderer which i honestly admit never ever heard of.

Rohde and Silman were talented youngsters so one expected some upsets from them.

Weinstein however was a more known (international) master so his opponent could better prepare against him.

But one cannot say that one upset must be thinked of higher then another.

@none: It wasn't easy. I found someon else who did and did a "view source" and figured out the magic html code to use. Then I had to figure out how to find my game ID number ( another view source" on chess.com) AND THEN I had to change teh format of my blospot location so the HUGE WIDE format could accomodate the chess board.
I can't explain it.

I scan them in from the book I got for Christmas... My other book is still enroute :)

Look at that combination that Rohde had to play to get the win, and then compare that to how Silman gets his win because the other guy lets him win the pawn on b7 (possibly out of contempt(?)). Too funny.

Jeremy Silman is a wimp. I challenged him to a duel and he didn't even respond to my email.

George,
It is great to see that you have been enjoying Chess so much over the years.
Great article that you did on your father.
Cliff N

Cliff! It's been a long road since Brunswick.

Glad to hear from you. Feel free to email me at george "dot" duval "at" comcast "dot" net

I think the prison part is inaccurate. I think that should say mental institution if what I've read is correct.