Twas the Knight before Checkmate 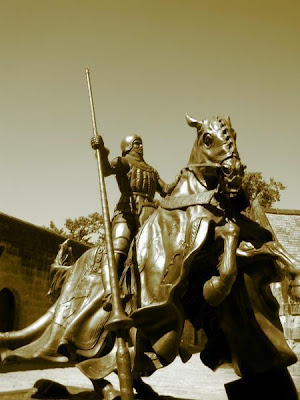 Twas the knight before Checkmate and across the board
There were advancing pawns like a marauding hoard
The queen said “ What pests!”
While the King replied “ I cannot rest”
When in his finachetto
The Bishop said “ I’ll send them back to their ghetto.”
And started to devise a plan that was grand
But with who might be partner for the stand
On Flank, on file and even if Fritzed-in
The pawns were well supported and rather well fixed-in
When in from the dark
The knight decided to hark
“ I will take fight with the lead thug,
I'll take down this wall of bugs”
“It’s suicide” the queen did shout.
The knight ignored them all and jumped about.
Down went the pawn in one blow indeed
The bishop joined in by the death of the steed
The queen saw an opening and took her stance.
“Check!” she said with mixed feelings and chance
The opposing King retreated at a hasty rate
The next move that came was a quick check mate.
All through the land, the feelings were not light
For all the king's peoples were saved by this brave and good Knight!

Merry Chessmas to all my readers

I’ll be resuming the Magical History tour sometime after Christmas with an intro to the Lone Pines tournament.
Posted by BlunderProne at 11:06 AM

Merry Christmas to you aswell!

Was this a self invented poem or does it come from a book?

Pretty good, but you should have described the steamy night of passion between the King and Queen on the eve of the battle.