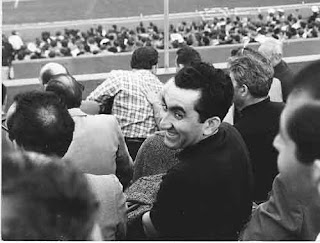 Born in Tbilisi, Georgia ( USSR) on June 17, 1929, made him 24 at the time of the candidates match of Zurich in 1953. He learned the came of chess at eight after entering a local chess school in his home town.

He had some impressive results at the age of 16, when he shared 1st-3rd place at the 4th USSR Junior championship at Leningrad in 1945. A year following, Petrosian won the title of Armenian Champion. At 17 he was already competing for candidates matches but didn’t quite make it in the big leagues until he moved to Moscow in 1949. In 1951 he won the Moscow tournament. In 1952, he was titled international Gandmaster and also got married to Rona Yakovlevna Avinezar.

He earned his nickname “Iron Tiger” because of his reputation of having impenetrable defenses which guaranteed safety above all else. This is most obvious in his solid and cautious style of play at Zurich. In round 9 against, Szabo, he plays a solid Orthodox QGD Tartakower variation. He slowly builds up a solid center and baits White with two central pawns. This causes white to exchange on the wrong square leaving white with a weakened knight and dark squares. The Tiger pounces as he builds a huge canon on the c-file and eats one of White’s pieces.

With white against. Euwe in round 10, he plays the Reti. Instead of playing to control c4, Petrosian shifts gear and focuses on e4. Euwe plays overly cautious and passive. This allows White to gain control of the center and, in particular, the d-file. After a series of exchanges, he finds a better endgame and wins.

In round 19, he plays white against Gligoric’s King’s Indian Defense. The game takes on a familiar kingside space advantage for Black versus a queenside space advantage for white seen in these KID positions. Around move 18, however, Petrosian lures Gligoric to open the King side. Gligoric plays a safer bet by dropping pawns on the queen side to open up for attacking potential but under time pressure, Gligoric didn’t play a sharp line involving a rook sacrifice in the position. This was all Petrosian needed to secure the point. 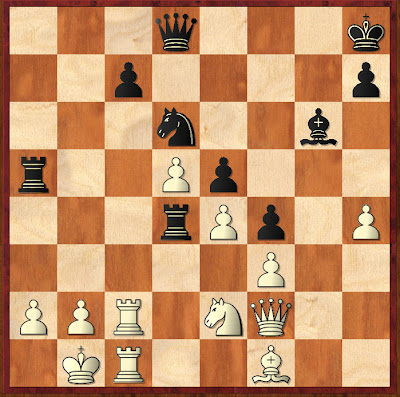 
In round 24, facing Szabo again, but this time, with the White pieces, Petrosian uses a very contemporary approach in this Reti game. In the first 10 moves, he plays moves like Qa4+, h4 and Rb1 all to get to a favorable middle game. Szabo sacrifices the f-pawn to open up the file and keep White’s king on the center. This doesn’t slow down the Tiger. He manages to “entomb” Black’s bishop which Szabo tries to recover with a knight sacrifice to open the game up. No luck, the Tiger pounces on his wounded prey.

In round 26, Petrosian demonstrates his pioneering spirit and plays what appears to be the first instance of a King’s Indian Attack. Bronstein views this as “ an excellent illustration of Petrosian’s style: its highly individual positional pattern and its logical consistency combine to create a harmonious whole and artistic achievement.” Considering this was never really seen in competition before, it was truly a novelty sprung on an unsuspecting Stahlberg.

He was a Candidate for the World Championship on eight occasions (1953, 1956, 1959, 1962, 1971, 1974, 1977 and 1980). In the 1963 World Championship cycle, he won the Candidates tournament at Curaçao in 1962, then in 1963 he defeated Mikhail Botvinnik 12.5–9.5 to become World Chess Champion. Petrosian is the only player to go through the Interzonal and the Candidates process undefeated on the way to the world championship match. Petrosian defended his title in 1966 by defeating Boris Spassky 12.5–11.5. He was the first World Champion to win a title match while champion since Alekhine beat Bogoljubov in 1934. He lost it in 1969 (to Spassky). Thus he was the defending World Champion or a World Champion candidate in ten consecutive three-year cycles.

In 1968, he was granted a PhD from Yerevan State University for his thesis, "Chess Logic".
He was the only player to win a game against Bobby Fischer during the latter's 1971 Candidates matches, finally bringing an end to Fischer's amazing streak of twenty consecutive wins (seven to finish the 1970 Palma de Mallorca Interzonal, six against Taimanov, six against Larsen, and the first game in their match).

His legacy remains for being one of the best players pioneering the theory of prophylaxis, years after Aron Nimzowitsch. His style of play was often highly strategical, notable for anticipating opponents' possible attacks, and he based many of his games on avoidance of error, content with accumulating small advantages.

Petrosian died of stomach cancer in 1984 in Moscow. Petrosian is buried in Vagankovo Cemetery and in 1987 13th World Chess Champion Garry Kasparov unveiled a memorial in the cemetery at Petrosian's grave ( pictured here with Spassky)which depicts the laurel wreath of world champion and an image contained within a crown of the sun shining above the twin peaks of Mount Ararat - the national symbol of Petrosian's native Armenia.
Posted by BlunderProne at 9:21 PM

very interesting entry, thanks. In Bronstein's variation, why not play 40.Qxd2 ?

I read once of his autobiographies of his chess games. I liked it. He liked doing things like rook lifts (...Rb5) and strategically sacrificing the exchange to cement his pawn chain, stuff like that. He had a profound positional analysis.

He could beat someone like Portisch, also a master of positional play, and win with superior, flowing, positional play to where an amateur might not follow how the win became won.

Sort of like the Karpov before Karpov, but a different strategic type of game. Karpov likes to build little concrete advantages, but Petrosion seemed to do it in a more amorphous way, even though he may have liked certain variations, lines and such. Perhaps Spassky absorbed some of this style into his game as well.

Petrosian liked to get a draw after a loss, to steady himself, so it's not like I would be scrutinizing his every game to glean theory from, necessarily.

Petrosian was a much underestimated player/champion.

But results not in tournament wins but in how few games he lost,speaks volumes.

The first thing i heard about Petrosian was that he defended against attacks of his opponent even before his opponent thought about that attack.

With other words, i have always thought of Petrosian as a very dull player. However, if one studies his games more carefully this dullness isn't always the case.

and how was court thing?

In my ches playing household, I grew up hearing about the three K's ( Korchnoe=i, Karpov, Kasperov), Tal, Reshevsky, Fischer ( of course) but it was Petrosian who was an inspiration as a positional player for me. He didn't play particularly sharp lines, only solid carefully placed pieces with an impenetrable fortress. Not like my house of cards :)

Thanks for the comments all.

@Anon: I wish to not divulge much more on the court thing on this blog. Blunderdaughter is learning some tough lessons this year. It's rather personal.

I look forward to your 1953 Zurich compilation, and Petrosian is my favorite player too, for many of the reasons cited in other comments".

I have found very few books on him, perhaps because people think he is boring? I have the Clark, Kasparov, and Petrosian books on Petrosian.

Now if I could only understand chess enough to grasp his style of play...

I look forward to your 1953 Zurich compilation, and Petrosian is my favorite player too, for many of the reasons cited in other comments".

I have found very few books on him, perhaps because people think he is boring? I have the Clark, Kasparov, and Petrosian books on Petrosian.

Now if I could only understand chess enough to grasp his style of play...

One thing I remember Petrosian being good at was the "king-walk". He would reposition his king out of a coming attack, walk it to another section of the board. He had "king presence", was always thinking about the kings' safety. When you think about it, moving the king one square is the easiest way to spoil countless combinations. hehe.

Of course, no world champion is a slouch at attacking, and Petrosian was no exception. His attacks could be very positional, undermining the other players' piece coordination and such. His famous quote went something like "I like to let the other player come up with a plan, as it's sure to be a bad one."

Petrosian is one the chess players whose games should be studied very deeply. His art of prophylaxis is great and his sense of positions is something I would like to adopt ;)